It's done- three days of gravel road racing, somewhere between 290 and 300 miles, a little bit of bush whacking and tons of fun.


I'd been half excited about and half terrified by this race all summer. Honestly, I was looking forward to all the miles of riding. Granted, there were going to be two days in a row longer than I'd ever ridden in a day, but I was oddly psyched up about that many hours on a bike. On the other hand, I was completely convinced I was going to be stomped to death by a moose.

I know, I know, I need to get over this whole animal fear thing. First it was the pig at Ragnarok and now it's the moose.

Anyway, I survived day one without being stomped to death. I even went to the front once after of few miles down the road, just because I figured it would be my only chance, ever in my life, to either lead a race or ride by Big E and yell, "Why you going so slow?"  I mean, if I was going to die by moose stomping, I had to at least accomplish these two things first, right?

After camping out the first night, we set out for our longest day on Saturday. The boys definitely didn't roll out in a nice, easy paced pack like they did the first day so I was alone from the get go. (Great, perfect opportunity for that moose to get me.) After riding alone most of the morning, I was happy to see Joshua, The Head Conspirator (HC), at mile 70. 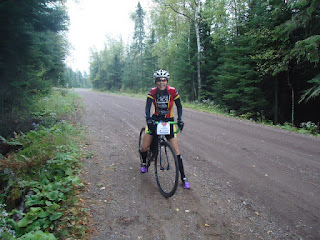 I was tempted to linger there for awhile and drink hot cocoa, but when he told me Big E had left a few minutes before, I hurried my butt up. 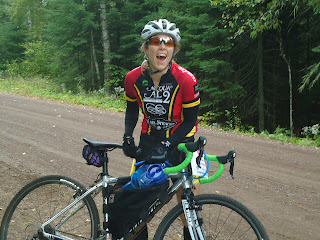 This is me laughing because I told them I was trying to catch Big E because I figured he'd have a flask. Really I just wanted to be near him and his big biceps so he could protect me from that killer moose.

So, I took off down the road, hopeful to catch people and found myself alone, yet again, for another 35 miles or so. The route got more remote at that point and I was headed down a forest road covered in fallen trees. It briefly occurred to me that maybe this remote road wasn't such a great idea alone, but my headstrong side pushed ahead. Then the road ended, right there in the middle of the woods, where all the angry moose live. Not to mention bears and wolves.

Thankfully for me, right at that moment, while I was deciding whether to risk bushwhacking alone or to just turn back, three guys popped out of the woods, followed by Big E. He did not look happy. Apparently, they'd been bushwhacking for an hour. Since their route hadn't gone anywhere, we all headed off into the bush another direction.  Eventually this group of five became about 12 as we picked up more guys who'd been lost.

Now, I know this might be every girl's dream to be lost in the woods with a dozen fit men. It might even be mine under different circumstances. Unfortunately, it's not all that exciting when they're all grouchy. On the bright side, I knew had Big E, his biceps and 10 other people to protect me from the big bad moose.

Long story short, we backtracked, made it out to the main road and headed into Ely.  The HC headed out with the moving truck to initiate a search for anyone behind us who might be lost in the dark. I had high hopes that he'd find them quickly because all of our dry clothes were in the truck. I was so hopeful, in fact, that I jumped into  a hot bath at our rented house, thinking I'd get to wear dry clothes when I got out. An hour and a half later, I lay in bed naked, deciding whether to skip dinner or suck it up and put the wet kit back on. Of course dinner won out.

The next morning, I'll admit, I wasn't too wide awake at the start. 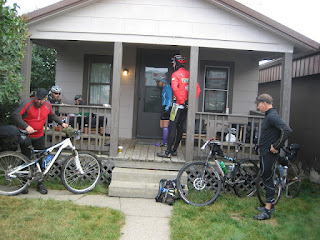 Thankfully, everyone else seemed a bit slow to start too, so I got to ride with some company for the first 10 miles. Of course, I couldn't hang with the fast crew after that so I was back to being moose bait.

I'll be honest, it was a long day. After somewhere between 125 and 130 miles the day before (my computer got reset by the bushwhacking!) my legs were tired. I didn't make the day any shorter by getting a flat and then adding on a few extra miles of "sightseeing." I suffered. I loved it though. I knew, even when I thought my knee wouldn't push down on the pedal anymore, that I'd finish this day.  At that point, the only thing that probably could have stopped me would have been that stomping moose, and even then I would've put up a pretty big fight.

The last few miles were all down hill. I'd stupidly left my jacket in the truck partway through the day. I was left with a shortsleeve jersey, arm warmers, a hat and some toe warmers that I stuck to my stomach. (No, toe warmers on your stomach do not keep you warm when you're riding downhill in the cold.) Still, when I made the last turn into town and I knew I'd finally get to be warm, I felt a pang of disappointment.
I thought I'd be elated. I thought I'd be relieved it was over. I did feel those things, but the disappointment was there too. It was over, my little (okay, my huge) adventure was coming to an end. My new friends would all be heading home and there'd be no more miles to ride, no more stories to share, no more jokes to tell. (Well, at least not until next time....)

When I told Big E this later, he smiled and said that was The HC's point all along when he organized this race. So thanks HC for putting on an awesome event that allowed us all to have an adventure and make some new friends along the way.

All pictures, except the last one that Big E took, were stolen from The HC. Thanks for that too!
Posted by Lisa T at 5:44 PM