I'm still not sure what exactly to say about what happened on Saturday...except perhaps it was a good thing Big E installed some fenders on Gracie? 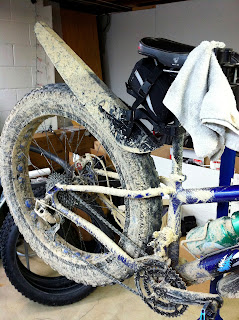 I'd like to say I knew what I was getting myself into, but honestly nothing I've done had really prepared me for riding a (at best guess) 40 pound bike for over 80 miles. The only way I can describe it is this- even during the 50 mile ultramarathon or last summer's nearly 300 miles of Gravel Conspiracy, there were moments when it felt easy for awhile. You know, you're cruising along, thinking could win this thing.....and then reality slaps you in the face and you crap your pants....or get lost....or imagine you're being stalked by a wolf.

Well, riding a fat bike for 80 miles is nothing like that. It never feels easy. Even mile one felt sluggish, although it probably would've been a heck of a lot easier if I hadn't missed the start because I was putting chamois cream on my ass.

I've had nightmares about missing starts for years. It finally happens and it's not because I overslept. It's because I decided the skin on my hiney was more important than starting with everyone else.

In case you're wondering, yes, I actually debated this. For about 10 seconds. Then I decided I'd like to be able to sit down in the next week.

So, anyway, back to these 80ish miles. Long story short- there was ice, there was mud and there was tons of FUN. This is mostly because I met up with The Girlfriends J at the halfway point and they provided constant entertainment for the next 40 miles. They tried to talk me into some lame "we all finish together" bullshit with 10 miles to go.

Whatever. I don't do that crap. With a quarter mile left I saw one of my favorite peeps, JIMAY!!!, manning the finish line and forced them into a sprint. At least it felt like a sprint to us. We probably managed to go all of about 12 miles an hour. Unfortunately, the finish line was crooked so I was forced to take 2nd, which was not really 2nd because at that point we were in nearly last place anyway. This is what I get for trying to race two guys who'd been clearly waiting for me at every stop sign for the last 15 miles.

Quite frankly, I'm lucky old Gracie even managed to make it to the line at all, because really how did this part even keep turning? 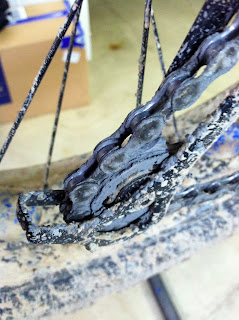 And my front derailleur? Well, it had already taken to shifting when it chose, so I was just hoping it didn't decide to shift into the small ring mid-sprint. 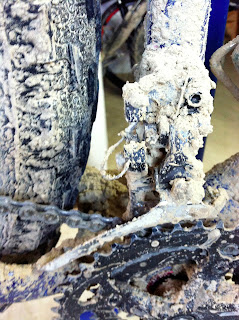 Poor Jimay thought we were all just going to blow right by the finish and not stop to chat. What he didn't know was, by then, stopping had become a bit of a challenge. 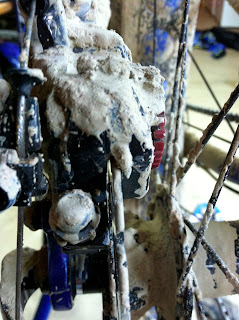 So- all in all, an awesome day on the bikes in the mud. Thanks to Sarge for putting on an awesome L-M-L race! (Some of the best tulip notes ever!)

Of course thanks to Big E too, for saving my face and butt and back from being covered in mud....and for letting me clean Gracie in your basement. Sorry about that pile of gravel......