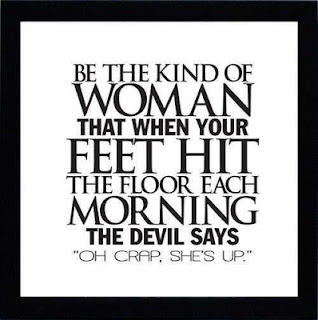 I woke up at 5:40 the next morning, before the alarm even went off.  It took a minute to understand what I was feeling.  I'd anticipated waking up sore and groggy, but instead I was sore and......excited. After Friday's adventure, riding the 145 miles to Decorah in the sun seemed like it might actually be fun.

About an hour later, I was headed out of Lansing to cross the bridge into Wisconsin. The sun was up, my belly was full of pizza and I was feeling confident about the day....right up until the moment I realized the bridge was grated metal. Aside from ice, I've only encountered one other surface on which I really dislike to ride. It's metal, especially grated metal. In fact, if there was a patch of ice and my only way around it was grated metal- I'd probably ride the ice.

Needless to say, I really wanted to walk that bridge. Unfortunately, my cleats were about the same size as the holes. So, I conquered one of my big fears before 7 am and rode the damn bridge. My worst nightmare of falling and grating my face off didn't come true and I crossed into Wisconsin thinking, "Hell yeah- I'm up."

Chris had given us the heads up that Wisconsin would bring us abundant pavement, hills and beautiful scenery. His description couldn't have been more accurate. Every grinder of an uphill ended with a view so amazing I'd remind myself how lucky I was to have saved this part for the daylight. Wisconsin also brought an abundance of friendly people my way. It seemed like every time I stopped to change cue sheets, take off a layer or run into the gas station for treats someone asked if I was ok, inquired what I was doing out here or simply stopped to say, "What a great day to ride a bike."

Heck yeah- what a great day to ride a bike!

I was almost sad that afternoon when I had to cross the bridge from Prairie du Chien back to Iowa. I had one last encounter with a friendly Wisconsinite before my crossing. I stopped at the gas station before the turn to the bridge. I wanted to make sure I was making the correct turn so I stopped a guy to ask if this was the turn for the bridge.

"Yes," he said, "but there's a lot of traffic on this bridge. You might want to ride up to Lansing and cross there."

I burst out laughing. "I came from there," I said, "and trust me, the traffic on this bridge couldn't be any scarier than riding across the metal bridge up there."  We chatted a bit more and I crossed the bridge (riding in the HUGE shoulder next to very little traffic) smiling and hoping people were this nice in Iowa.

The first part of Iowa sort of flew by. It was warm and sunny (in case you were wondering- SPF lip balm does not work as sunscreen on the rest of your body). I was happy to return to the gravel. There's something about sunny days on the bike that always remind me of my mom. Perhaps knowing she took her last breath pedaling her bike on a sunny day makes it easy to connect to her. It's like she hops on the back and turns my bike into a tandem. Whatever it is, on these days it's always to get in the groove and cruise along, lost in thought.


At this point I'd probably been riding alone for nearly 100 miles that day so when I finally saw someone up ahead, it took awhile to realize it was another rider. I pushed to catch up, partly for the company and partly out of pure curiosity as to who it might be. A few miles later, I was riding along with Pat, laughing at the sweatshirt he'd bought in Preston still strapped to his bike.

We eventually split up, but not before he put the idea in my head to ride past Decorah that night to make the last day under 100 miles. I was feeling good so I figured, what the hell, I'll try that.

That thought was in my head when I rode into town. I passed the Super 8 and rode straight to the store to restock with food. As I was packing up the bike, Dan and Hal from Canada rode up, having just finished dinner. They quickly convinced me to try to ride through the night to miss the next day's storms. We headed out of town as the sun dropped below the horizon.

Ten miles down the road, I realized I might be riding through the night alone. Although we were all riding the same speed, I wasn't ready to stop as often as Dan and Hal so I ventured off alone, hoping my light would make it through the night.  At that point, we were riding on a lot of flat roads so I alternated between turning my light off to use the moon on the flats and turning my light on to avoid crashing on the downhills.

I'm not sure how long I rode like this. I passed a tiny town with a bar, where I took a wrong turn and had to backtrack. Not long after, I saw more lights up ahead. My first instinct was that Dan and Hal had gotten ahead while I backtracked, but as I got closer I found Jonas and Lindsey, who had stopped to read the cue sheets.

The three of us spent the rest of the night riding together. Honestly, the miles passed quickly. We made a good bunch, Lindsey pulled us along for much of the night, leading the way with his bright lights. I navigated, reading ahead on the cue sheets and calling out turns. Jonas, who seemed to have endless energy, kept us awake with conversation.

We managed to make decent time, even with a short stop at a middle-of-nowhere pop machine that gave us all diet pop. We laughed and drank it anyway, happy for the caffeine.

We made it to Forestville State Park just as the first hint of morning arrived. We filled up on water and snacked one last time before our final push. As we were getting ready to leave, Lindsey pointed out that he couldn't believe how energetic I was after riding as far as I had that day (I'd been over 200 miles for a couple of hours now). Of course, as soon as I got back on the bike, the fatigued hit, as if the mere mention of it was enough to put me to sleep in an instant. I realized then that I had not sat down (except on my bike) since I'd left Lansing that morning.  Needless to say, I was happy to find Dr. Pepper in the pop machine in Cherry Grove. I carried it all the way to the finish in my pocket.

Of course, even after Cherry Grove, we still had one last challenge- the water crossing. At this point, I was itching to ride so I kept creeping ahead, eventually riding down the hill to the crossing alone. As I neared the bottom of the hill, I could see the rushing water. "Oh hell no," I thought. I was fully prepared to sit down and wait for Jonas and Lindsey to carry me across when I saw the sign. 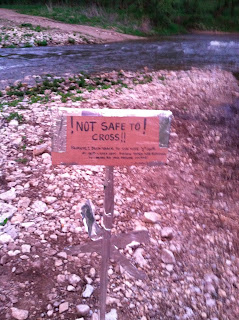 So, I turned around and rode back up the hill, catching Lindsey and Jonas on their way down. We stopped to put rain jackets on, since the lightning we'd seen in the distance for hours had finally arrived with some rain. Not long after, I saw my first vehicle in what seemed like hours. A truck drove toward down the road, the driver sticking his head out the window. At first I thought it was just another friendly person wanting to know what the heck I was doing. As I got closer I realized it was Chris, coming to check on us. (Rumor has it, he only slept for an hour before getting up to make sure we all make it on to the re-route.) We chatted briefly, he told me Big E was waiting at the finish and then it all sunk in- I was gonna finish this thing.

I rode into town an hour and a half later, turning the last corner to find Big E and Chris (how this guy seems to manage to be everywhere at once I'll never know) waiting at the finish. I'd picked the perfect time to finish. (As if I had a choice....) The foot races had started two minutes earlier so I got a cheer from a small crowd as I came in. 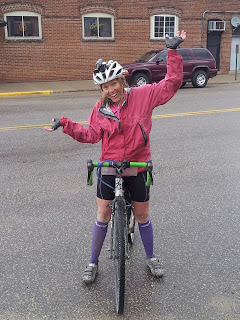 Truthfully, I don't know how to describe how I felt right then. We chatted for a minute and then I said, "I'm not sure what to do with myself now that it's over." Every ounce of energy for the last 25 hours had been put into pedaling.  I was a bit lost having to do anything else. I was caught between complete, utter exhaustion and not wanting to let the day go. I felt relief that it was over mixed with the familiar discontent that creeps in whenever I'm not moving forward toward a goal.

Mainly, I felt a bit overwhelmed that once I let the day end I'd never be able to match it, that in the real world things would never be this simple and that once I fell asleep I was going to wake up really, really, sore....