If there's one positive to sleeping in a nasty hotel room it is this:

The alarm went off and I had my belongings in the car in minutes, wanting nothing more than to escape without any contagious diseases.

Since it was still pouring rain, I hung out in my car until right before the start, leaving just enough time to throw on my pack and helmet and extract Chili from her comfy spot in the back of the car.  After running into a guy at packet pickup who was riding with an easier gear than I'd chosen, I'd been worrying all night about my gear choice, but the first uphill eased my nerves and I settled into my pace.

It seemed like we literally flew through the first 14 miles of the race. Before I knew it, I was riding on a trail along the river back near the start. Had I really thought about it, I would've realized I was feeling so great because I'd just ridden downhill for 10 miles, but that didn't cross my mind until a mile or so later when I found myself struggling to make it up a hill. For the next 6 miles or so I'd ride until I couldn't push the pedals anymore, then hop off and push.  When the trail finally seemed to flatten a bit around mile 20, I was happy to finally stay on my bike for more than 1/8 of a mile. Of course, in my overzealousness to make the most of this, I hit a wet root at the wrong angle and before I knew it I'd fallen off the trail with Chili still hooked to one foot. We both began sliding back down the mountain I'd just busted my ass to ride up until I shook myself loose, threw the bike up towards the trail and clawed my way back.

This was not really how I'd envisioned this going when I was dreaming about riding with Rossi.

When I finally made it through the singletrack and onto the fireroad, I was a bit relieved. I figured it could only get easier now.

Am I going to die?No.

Is everyone else going to have to wait for hours for me to finish? Not unless everyone behind me quits.

If I were to call Big E right now would he feel sorry for me? No- he would tell me I chose to be here and to get my butt moving!

So- since my answers were all essentially no, I pretty much slumped over my bike and suffered along. At this point I could've used some encouraging words. When a guy pedaled up next to me, I was hoping he had some. Instead, he asked if I'd done this race before. When I said no, he explained that he was wondering how the rest of the hills were going to be. He was riding a demo bike and he wasn't happy with the gear ratio and he wanted to know if the hills were all this steep.....

I'm not sure if I gave him a death look or he just happened to look at my rear wheel, but before I could even answer he said, "Wow, you have no sympathy for me right now since you only have one gear, do you?"

All I could do was laugh and say, "Yes, and it's definitely not the right gear."

At this point I'd like to say we rounded the next corner and headed downhill and the whole day got better, but I'd be lying. What really happened was this- we rounded the corner and headed downhill and I quickly discovered I had some serious brake chatter. After completely losing my brakes the last time I rode in the mud, this did not boost my confidence. Somehow I convinced myself I really wasn't going to die and kept going, but really I spent the next 70 miles alternating between riding uphill until I was so dizzy I had to walk and riding downhill in terror. I told Big E later I'd never ridden that far wanting to quit and not actually quit.

When I finally got to the last aid station, another girl flew in behind me and I realized that I wouldn't even get to take it easy for the last 8 miles of mostly downhill. For anyone who thinks that only the people up near the front of a race are actually racing, I can attest to the fact that this is not true. At least for me it is not true. Ever. I can be dead-dog tired, barely clinging to my handlebars like I was in this case, but if I think I might get caught and lose a place (or catch someone for that matter), I will dig some sort of demon out of the dredges of my soul that will make me ride faster.

Truth be told, perhaps that little demon is why I keep doing this stuff. I hear a lot of people say they run or ride to escape their demons, but I do it to find mine, to make sure I haven't lost her or him or whatever it is that lives deep inside me that seems only to escape when I think I can't take anymore.

So, the little demon and I sprinted to the finish line, probably close to the back of the pack, but who cares? There was a mug and lemonade.... 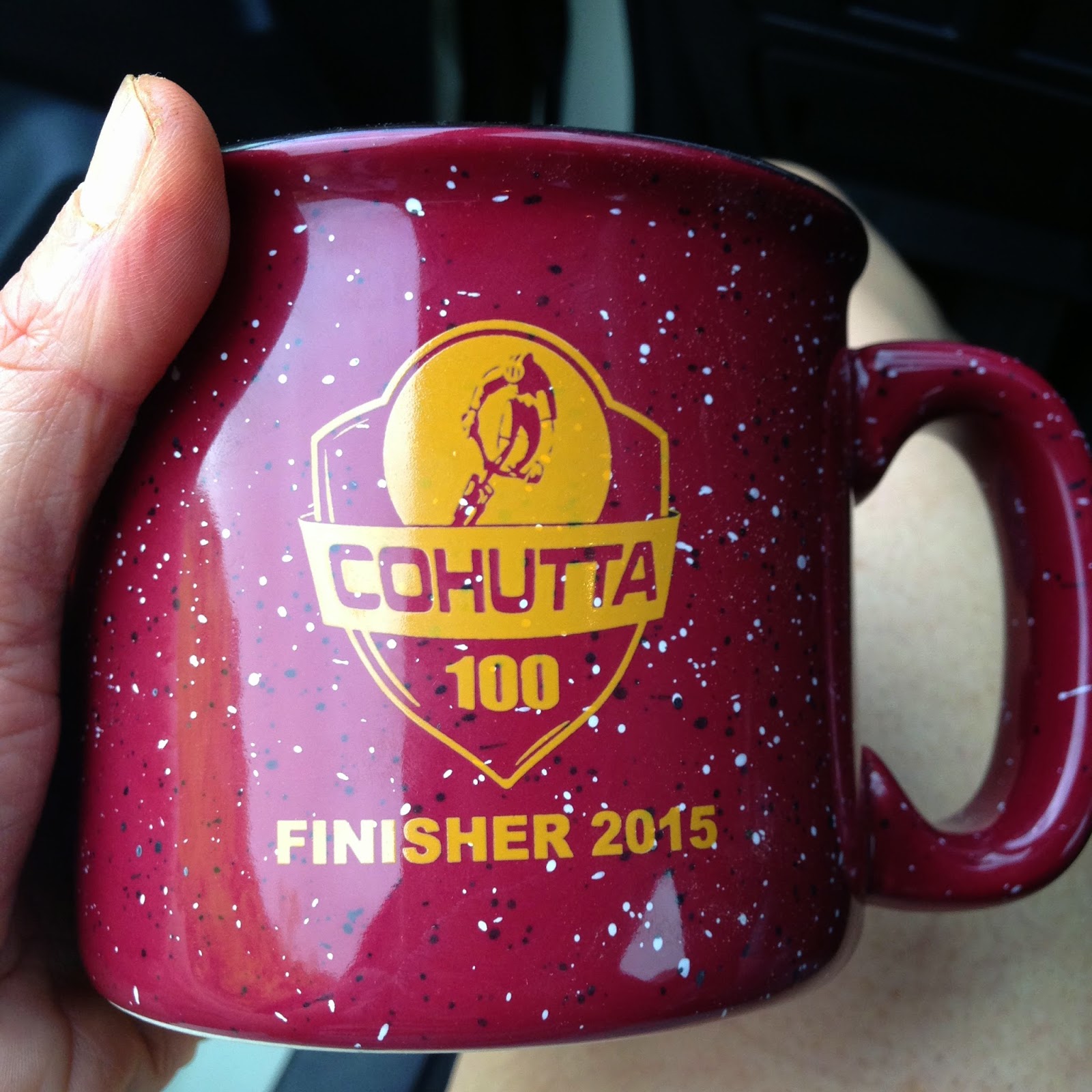