Beavis and Buttcrack Do Hard Things

Disclaimer: I do not write typical race reports. If you're looking for specifics about my gear set up for HAMR or secrets about the route, you won't find them here. Other than knowing I ran 34x19 for gearing and had Thunder Burt tires on (and new front brake pads courtesy of Chad) I don't know much about my bike. I'd rather ride it than geek out over the parts. And if you want to know the secrets of the route- come ride it next year. Also, these events may not be in the right order. Cut me some slack- by the end of this story I'd been pedaling a bike for 23 hours. I'm allowed to mix up the sequence and exaggerate.

Despite the fact that we didn't start riding until Saturday, the 187 miles of HAMR really started Friday night since we were required to check-in with the mandatory gear and then camp together to be awakened for a random start time during the early morning. I wasn't worried about failing gear check, at least unless you could fail for having too much stuff.
After passing with flying colors (Stacie seemed rather impressed with the kindling Big E made me to stash in my match case.) I headed to the camping spot I shared with Stamper and the infamous Brad Reed the Endurance Machine. If his endurance skills match his ability to polish off a 4 lb pastie in a small amount of time, he definitely deserves his infamy.
After the pre-race meeting and some passport examination
we hit the hay to try to catch a few zzzz's before whatever random wake up shenanigans The Ringmaster Todd Poquette and Matt had in store for us.

Thankfully, mercy was taken and we weren't roused until 4am. An hour later, we were off in the dark. Despite my Garmin not having any idea what to do at the first few turns and an early ridiculously steep, rocky hill that I had to push, I finally settled in to a rhythm and enjoyed my favorite time of day to ride. After 20ish miles of peaceful riding by myself, I heard ruckus behind me. Along came The Ringmaster and a group of guys. I can't say I was disappointed. We were on the famously sandy Red Road so having them pass me meant fresh tracks in the sand I could follow.

A few miles later, we entered Mosquito Gulch, where I first caught Buttcrack Jenny and began a lot of miles a back and forth. I had no choice but to stand on the hills and singlespeed away. She would inevitably catch me on the next flat for some time to chat. We continued this way for miles, including making our way across the river
before finally climbing Mt. Arvon in the rain. I was hoping for a view since it's the highest point in MI, but all I saw were a bunch of cold, wet riders! After the mandatory selfie at the top 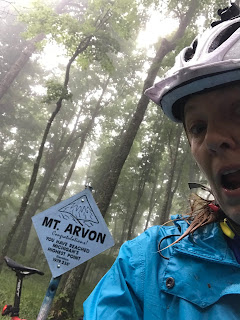 I headed out quickly. The Ringmaster was at the top asking for a working phone. I didn't want to be there if he called for a ride. There's something about seeing the race director bail out of his own race that's a bit disconcerting. Especially when it's because he's a bit worried about the rest of us!

If any of us had thoughts that we could've done this race on a cross bike instead of a mountain bike, they were quickly erased on the ride down Mt. Arvon. With the rain, the already technical descent became more like a rocky, sandy stream. I clung to the bike for dear life as I slipped and slid down the hill.

Thankfully, Buttcrack Jenny caught me again as we approached the town of L'anse. After seeing how remote the race had already become, we made a pact to finish together in the dark. We happily resupplied our water and food at the gas station before heading out along Lake Superior for a few easy miles and some much needed sun. (Ok, maybe my idea of "sunny" was a bit skewed at this point.) 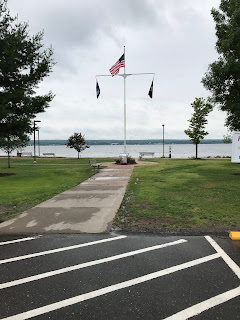 We made good time on the pavement before hitting the next gravel road with some daylight left. By this point, we were riding side by side, of course chatting away to pass the time. Now, if you've ever met Buttcrack Jenny or myself, you know that if either of us is talking, we are also laughing. A lot. Since our conversation had turned to farts as this point, I'm pretty sure anyone that heard us coming would have most likely thought Beavis and Butthead were coming down the road.

That's pretty much how it went.

Well, at least that's how it went until shit started to get weird. What started as a nice gravel road with a little traffic got more and more remote. There was a bus in the trees, then a boat, then a trailer, then a random lawn chair. As it got darker, it got creepier. Considering I used to lead canoe trips on the river where they filmed Deliverance, it takes a lot of redneckery to freak me out. This, however, made the hair on my arms stand up. I started humming "Dueling Banjos". Buttcrack and I got pretty quiet.

Thankfully, we finally came to a little pavement. It was quick, and we flew down the hill to the next right turn back on to gravel, where I promptly crashed in the sand. Thankfully, my pedals had treated me well for 169 miles, but now they'd decided to get sticky, making it nearly impossible to clip out quickly if I needed to.

Great, we're in Deliverance-country and I'm trapped in my pedals.

Thankfully at this point, the road was still pretty well maintained and I didn't really need to clip out much so we headed up the hill and took our mandatory snorkel selfies at the checkpoint. 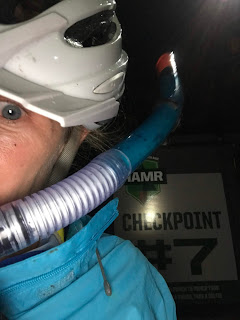 A few miles later, we had unexpected headlights behind us. Before I knew it, I heard Buttcrack talking to the driver and really hoped she wasn't trying to make friends with one of the Deliverance people. Thankfully, it was her husband, Matt Attacker Acker, who'd won the race and was now driving around offering support. Class act! He stopped up the road to offer us some food and fill us in on the rest of the course. We had less than 15 miles left and I was still feeling great so I didn't really get too concerned when I heard him say "hike a bike". Of course, in hindsight, if someone nicknamed Attacker says you're gonna hike a bike, it's probably a sign that shit's about to get real.

First we headed downhill on a sandy road, where I proceeded to crash numerous times and we dismounted lord knows how many times to walk around water. At some point after what felt like miles of this the scenery changed a bit. Then we rounded a corner and I heard Buttcrack say, "I think we're gonna have to hike this."

Great, now we're in Deliverance-land, we're pushing our bikes and a Sasquatch wants to eat us.

Just for good measure, I shined my light into the trees every couple of minutes. You know, just in case Sasquatches are afraid of light.  I just hoped we smelled bad enough to scare him off.

After our push-a-bike, we remounted and continued on our way, hoping to find the elusive Chunky Summit checkpoint. In our passports, it said, "Watch out for washed out culverts," in the description for this checkpoint. I'm pretty sure it was in one of these culverts, while trying to descend, where I discovered one of my eyes was so blurry I couldn't see out of it.

Now we're in Deliverance-land, I'm trapped in my pedals, there's a Sasquatch in the woods and I can only see out of one eye.

Of course, I eventually crashed again, bashing my hip on a rock and finally throwing a hissy fit. Buttcrack calmly helped me up, squirted some water on my cleats and in my eye and we were on our way.

A few minutes later, my Garmin went haywire. It wanted, of all things, for us to make a u-turn. Seriously, we just rode 179 f-ing miles and you want us to turn around?!

You guessed it- now we're in Deliverance-land, I'm trapped in my pedals, I can only see out of one eye, there's a Sasquatch in the woods and my Garmin is drunk. Oh, and did I mention it was raining again? At least my ass was soft from the mixture of Chamois butter and sand that had been squishing around in there for 22 hours.

Thankfully, Buttcrack's Garmin was not drunk and we found our way to Chunky Summit and then to the Top of the World checkpoint, only three miles from the finish. We cruised the last three easier miles together, finally crossing the line after 23 hours on our bikes. Buttcrack tried to ring her Hamburger bell to announce our presence, but it was so waterlogged it sounded like a drowning duck. Good thing we never needed it to scare off that Sasquatch.

Before heading our separate ways to dry off and get some sleep, we of course took a few fun finish photos.
This one pretty much sums up our day. Two goofballs in the woods, not always right-side up, but smiling and sticking together. I'm pretty sure that's what The Ringmaster and Matt had in mind for this race- to give us something so hard we'd see that sometimes the group effort is much more important than the win.  (And of course to make us question our sanity.) After all, it's hard to fight off a Sasquatch on your own.
Posted by Lisa T at 8:57 PM