Wally the giraffe and I have made it safely home, although not without a little excitement. After I took advantage of one last sunny bike ride in the morning, we left San Diego about 3 pm on Monday. Thanks to high speed limits(In Utah you can drive 80 in the flat spots, but they do make you take it down to 75 for the turns.)  and good weather, we made it to Green River, UT that night. (Even with one last dinner at IN n OUT in Vegas.) We hit the road the next morning, ready to make tracks again.
When we hit CO, I noticed signs every few miles warning commercial trucks that they were required to have chains for MM 178, Vail Pass. Until about MM 150, I assumed MM 178 stood for some side road to Vail. I mean, really, it wasn't even snowing where I was.
Somewhere between mile marker 150 and 160, I realized that the whole MM 178 thing stood for mile marker 178 on the road I was on, I-70. I decided maybe I should at least pull over and exchange my flip flops for shoes.
Because who really wants to be the dumbass from Cali that skids off the road in the snow, can't find her shoes and has to push her car out wearing flip flops?
Literally ten minutes after I changed into shoes I drove from weather that involved just a few flakes, into this: 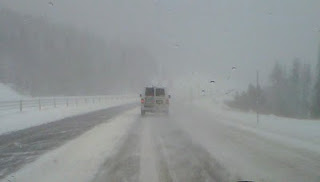 (Although this is actually after the snowplow passed us and cleared the road a little.)
Apparently I wasn't the only dumbass because I saw a trucker putting chains on his rig in shorts and a t-shirt.

Basically, for nearly two hours, we crept along hoping not to drive into the ditch. Thankfully, the snowplow finally passed us and threw down some gravel, which was a relief because at that point I was stuck behind a constantly fish-tailing Lexus driven by a woman so terrified she didn't realize that she might stand a chance of ending the fish-tail if she would just drive over 10 mph. Ever tried to drive uphill in the snow at only 10 mph? We all fish-tailed except the snowplow.

I know what you're thinking- why not just pull over? Easier said than done when every exit and rest area are completely snowed in. Rather than risk being stuck along the road, I chose to sneak in behind the ski resort shuttle van and drive it out. I figured no one else on the road had driven in snow as much as that poor guy. Plus, I figured the mini van would handle as least as well as his van in the snow.

Mr. Shuttle Driver delivered us safely down the other side of the pass and we played tag with the storm the rest of the trip. Thank goodness I put the all season tires on before this trip!
Posted by Lisa T at 7:16 PM