This weekend's adventure: The Sandwich 50. Forty-seven-ish miles of singletrack.

Why, you ask, would I subject myself to this when the most I've ever raced on singletrack was the few miles of singletrack in Iceman?

I heard there were bacon hand-ups every lap. This proves what many of you knew about me, which is that I will do pretty much anything for bacon. Big E says he's never eaten as much bacon as he has since he met me. I'm not sure why this surprises him since 1) I was wearing my PJ's when he arrived for our first date and the top said, "Bacon is meat candy." and 2) I gave him bacon for Valentine's Day....and then ate most of it.

Now back to these bacon hand ups. According to the legend, about halfway through each lap, you have to ride across some tree and a skinny board and they give you bacon if you do it. 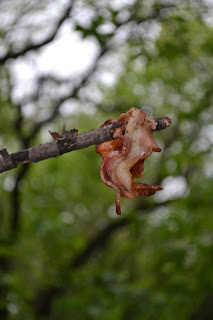 Now anyone who has ridden with me knows that, although I'd do just about anything for bacon, I'm not real fond of riding across anything "skinny." In case you were wondering why, let me share this picture with you: 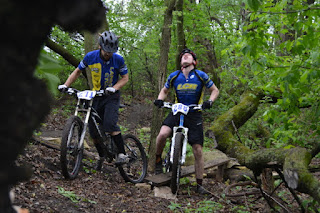 Now, I'm not sure what exactly is happening in this picture, but I'm pretty sure these two were trying to earn some bacon and it didn't go so well. (I hope they gave them bacon anyway.)

So, chicken that I am, I figured I needed to try some other tactic to get myself some bacon. Turns out, you can just smile real pretty and they'll give you some too. 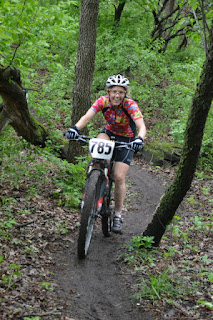 All those crazy boys think they had to do tricks for bacon when all they really had to do was this....and I didn't even have to take mine from a stick. That's right- hot off the grill right into my hand. (Of course, after watching me descend the hill before the bacon with only one foot clipped in to avoid crashing, I'm pretty sure they were just hoping they could get me a piece of bacon and get me out of there before I ran them over with my bike.)

Unfortunately, they ran out of bacon after lap four, but I did all seven laps anyway. I did not, however, stay as clean as the above picture. With about 30 minutes left in my last lap, I heard thunder. Not just any thunder, but that kind of thunder that says, "Hurry your ass up and finish what you're doing because in a few minutes the sky's gonna open." So I hurried my ass up and ten minutes later I was riding in the rain anyway. It was tempting at one point to just cut down the road we crossed and head for the car, but I figured since they gave me all that bacon just for smiling I'd better at least finish. Plus, I was the shortest person left out there and lightning strikes the highest point, right?


So my first singletrack race is in the books and I finally got my pig. I kinda felt like one in all that mud too.....
Posted by Lisa T at 2:08 PM