As usual, when I don't blog for awhile, it's usually because I'm out having tons of fun so I have something to write about later. It actually feels like I've not written in months, when really it's only been one. Granted, I think I've only spent a few nights in my own bed in those weeks, so I'm not surprised it feels longer.

After my realization that my body was begging for a break, and knowing I had an ultra marathon planned for the following weekend, I was looking forward to some R & R on Memorial weekend. I mean, really, what's more relaxing than some time in the woods away from the pressures of home?
Note that I didn't say "away from the comforts of home." If you look closely just left of center, you can see our tent, which I called, "The Taj Majal." I don't know that I've ever slept in a 6 person tent before, and if I have, it most likely wasn't just with one person. It certainly wasn't on a cot with a real pillow. Yes, that's right, I went camping and I didn't even sleep on the ground. (Although I did end up on the ground one night when I flipped the cot on end.) In fact, I'm pretty sure I've lived in at least one house (fine, it was a shack) that was less luxurious than the Taj Majal there. Thankfully for me, Big E likes to camp in style. Although I'm pretty sure all this pampering in camp was to butter me up for the 4 wheeling the next day. 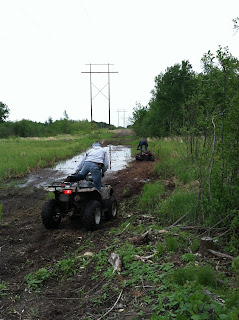 Just before this picture was taken, I was on the back of one of those 4 wheelers, stuck in the mud. Thankfully, after leaving me there with the thing slowly sinking deeper into the mud (which smelled like poop, by the way) Big E walked back out into the mud, let me climb onto his back and carried me to dry land. We don't call him Superman for nothing! Of course, after we towed one 4 wheeler out, the boys proceeded to try to drive another one through the same mud pit. Which meant we then had to pull another one out. Not that there was much "we" involved in this process, since I hung out on dry land. In fact, the extent of my actual driving of any vehicle all weekend was a 100 yard drive on one to fill water jugs. Even then I forgot to put the thing in park, which probably explains why I didn't drive any more than that.

So, after a weekend of mud, s'mores and luxury camping, I prepared myself for an ultramarathon.  I don't really have much to write about the race, except to say, I'd much rather have been 4 wheeling again. By mile 26 I was walking. By mile 31.5 I was done for good, having decided there was no way in hell I was walking another 31.5 back to the finish, even though I could make the cut-off. It was, quite frankly, a pretty easy decision. In all honesty, this time, when my body quit, my spirit quit too. I simply didn't really want to run, or walk, or even stand up anymore for that matter.  Instead,  I went back to the hotel and ate dill pickle potato chips.

Two days later, I was on a plane to FL to see Pop, Mama Liz and Amanda the dog-queen. Amanda has decided she's a person now. We decided this was official when she proceeded to try to do sit ups with me. 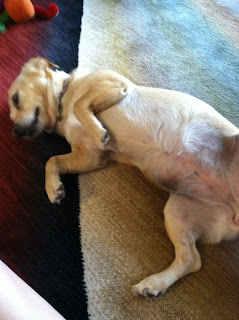 I'm not sure if I got a better ab workout from the sit ups or laughing at the dog. I guess it really doesn't matter.....

After a week of drinking margaritas and daquiris and eating everything in sight, I think my body was starting to recover. Pop, however, is now convinced I have a tapeworm. I think it was ice cream twice in one day that finally convinced him....