Some Days You Never Forget 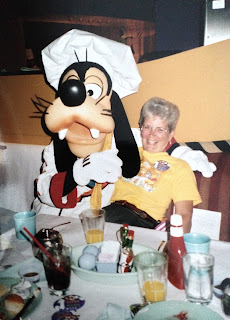 January 30th is a day I will never forget. No one in my family will, I'm sure. Every year the day looms. It starts sometime before Christmas. Every day becomes a battle to hold my shit together. I cry on the way to work at least once a week. I cry every time I ride my bike, which is pretty messy in January. I discovered last week that crying in the cold not only makes your eyelashes freeze together, but it also makes the skin by your eyes 100 times more susceptible to frostbite.

Every year I vow I won't be an emotional mess this time of year, but unfortunately I've learned that you don't get to control grief. You can live through it, you can be resilient as hell and smile when you need to, but you don't get to make the sadness go away. Does that mean I wallow in self pity for two months? No, but I've learned it's also better to just be genuine with my feelings. I could totally be wrong on this, but I'm pretty sure you can't bury one feeling without losing a little bit of them all and there are so many great ones I want to keep.

The same goes for memories. I have so many I want to keep so if sometimes they came with a little bit of sadness, I'll take it. Of course there are others, like the one of Mom being felt up by Goofy at breakfast, that can't possibly bring anything but laughter.

I'll take those too and hold on to them with everything I've got.
Posted by Lisa T at 3:27 PM No comments:

Despite living in the city, skiing from our house couldn't be any easier. I can literally walk across the street, step into my skis, glide across the school yard, sneak up a short trail behind the school and have the trails to myself midday.

That is, until today.

Instead of my usual peaceful midday ski, I found myself surrounded by teenagers. In skin suits. Apparently high school ski races take place at noon on weekdays. Who knew?

Needless to say I spent the next hour being passed by skinny kids in lycra. 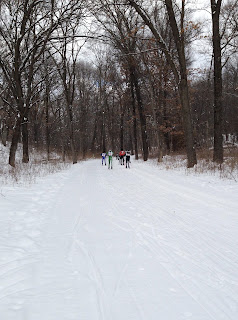 I did my best to stay out of their way. They were kind enough not to run me over. They were too busy yelling at each other. Apparently skiing is not like running where the fast guy needs to move over to pass the slow guy. No, these guys just yell at the person they're passing to move out of the way. Now I know why I never ski raced. Well, that and the fact that I'm really not all that coordinated with slippery boards on my feet. I can run uphill like a champ but put me on a downhill and I'm like a baby deer learning to walk. Every limb goes a different way and I start swearing. (Pop would probably tell you I inherit this from my mom. My ears burned the last time I skiied with her.)

In other news, a 3rd grader told me I had soft hair this afternoon and on my way home from work tonight a guy begging for money on the corner blew me a kiss.

I realized while riding yesterday that I've ridden on one trail, and one trail only, this winter. For some reason, my urge to explore hasn't expanded beyond what I can get to without driving these days. I've always had a bit of an aversion to driving somewhere to ride, but this winter I've been particularly stubborn in my refusal to drive to a trail to ski, bike or snowshoe. Not that that really stops me from seeing anything new since I never fight the urge to stray from the trail to see if there might be something living in a hole in a tree. 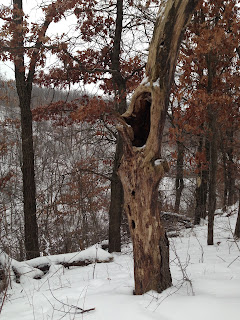 One these days I'm going to get quite a surprise when some creature jumps out while I'm peering into its home.

I just hope it's not a human wearing the collection of clothing I've seen scattered about the trail lately.....
Posted by Lisa T at 12:04 PM No comments:


Despite having signed up for an ultra running event, none of my winter adventures lately have involved running. At least not running without snowshoes, which I guess is still running, albeit at a significantly slower pace and with the end result of incredibly sore calves.

The rest of this winter's explorations so far have involved either skis or my beloved Max, who was given an amazing Christmas upgrade courtesy of Big E.

One of my greatest winter challenges has been hydration. I've learn to keep my hands, feet and head warm (although my butt is a slightly larger challenge- pun intended) but keeping my liquids liquid has been a much larger feat. Insulated bottles work only down to a certain temperature, and contrary to popular belief, they still freeze even if I put them upside down. The Camelbak inside the jersey, which works for many people, has returned some uncomfortable results due to leakage (not of me, of the Camelbak!) and still doesn't work. Apparently I just don't generate enough heat to keep myself and a Camelbak warm. Enter some new insulated bags from the always awesome J Snell at Barking Bear Bagworks. 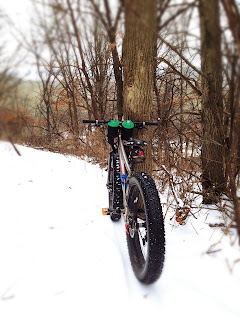 I first saw bags similar to these on J Snell's own bike this summer. He uses them for feed bags, but I instantly hoped an insulated version might solve my frozen bottle dilemma. (Yes, I plan for winter in the middle of August.) So, when Big E asked what I wanted for Christmas, I put him in touch with J, who put together exactly what I wanted. They keep my liquids liquid and I can get my bottles in and out with mittens on. What more could a girl ask for? 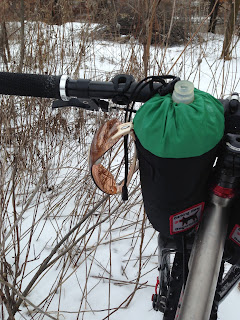 Cool colors and a place to hang my sunglasses of course!

All in all- one of the best additions to winter riding ever! Now I just need to kick this sore throat so I can get off the couch.... 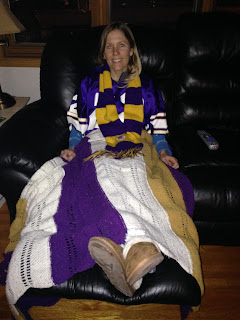 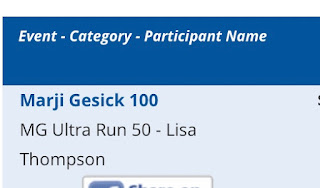 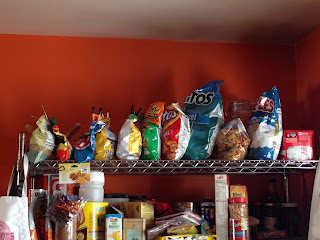 I've posted before about my interesting finds on my urban trail adventures. I guess I should count myself lucky to live near a trail where I can find a hooka and track deer on the same day. Or, as happened more recently, track some turkeys 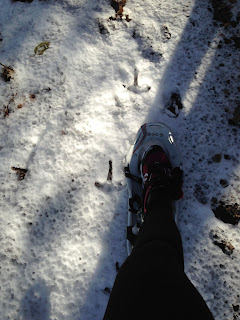 and find a bra on the same day.
A leopard print bra no less. If I add this to the recent finds of a glove, hat, jacket and sarong, I'd have a whole outfit. Of course, I wouldn't be wearing panties and my bra would be six sizes too large but I'd have an outfit.

Maybe I'll wait 'til spring. By then I'll probably have two gloves and a couple of mismatched shoes.

Before our last few inches of snow fell, I also came across this on the trail. 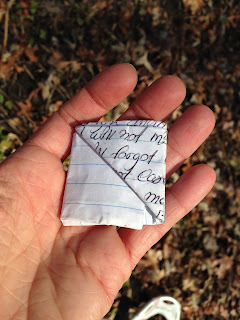 I'll admit, I was incredibly tempted to read it. The few words I could see were full of passion, leading me to want to see the rest. I stuck it in my pocket and carried it home. It looked too personal to leave for just anyone to find and read. Of course, by the time I got home, I had convinced myself that I too, was just anyone to this person and the words weren't meant for me to read. Some words, even quite a few of my own, despite the fact that I post so many of them publicly here, are meant to be private. So, I reluctantly buried the note in the trash.

Of course, now I'll never know if it belonged to the same girl who lost her bra, but perhaps some things are better left unknown. I'm sure I'll find something even more interesting soon. Let's just hope it's not panties.
Posted by Lisa T at 3:59 PM No comments: