Livin' in the Bucket

My quest to race for less than 10 bucks all year continued today with a 5K turkey trot. Of course, finding a 5K to fit my race fee restriction was difficult, but I finally found one at UW La Crosse. I immediately signed up because, well, La Crosse is only an hour away, right?

Enter the wisdom of Big E, who patiently explained after I signed up that La Crosse is 3 hours away. Thankfully, I have not imposed any gas restrictions on myself. (In more ways than one...) After all, this is supposed to be about new experiences and adventure, right?

Of course, the day after I learned of the 6 hour-round-trip drive, I checked the predicted weather for today. 14 degrees. Windchill below zero. Big E then dubbed the race the "6 Hour-Round-Trip-Icebox 5K." Oh well, weather will just add to the adventure, right?

So, that is how I ended up in the car, headed south, at 5:15 this morning. At first I watched in horror as the temperature dropped. Isn't it supposed to be warmer down south? Then I got over myself and got inspired by the sunrise. At some point I noticed a billboard, which is really quite a shock, because, as Pop can attest to, I absolutely suck at reading signs while I drive. I can tell you all about the sunrise, every animal I saw along the road (alive or not) and even what people in other cars were doing, but it is a minor miracle if I can tell you the speed limit or what exit I'm near at any given time while driving.

Anyway, my bad driving habits aside, I saw this billboard for State Farm. It said, "Is Life Insurance on your Bucket List?" This led me to think about my bucket list. My nonexistent bucket list. What? How could I not have a bucket list? How do I not have a list that includes, "Do 6-Hour-Round-Trip-Icebox-5K?"

Since I needed something to do other than read speed limit and exit signs, I thought about this. I really like lists. I've found them quite useful in life because my brain runs a mile a minute but contains a short-term memory of about 3 seconds. I can come up with 25 things I need to do each day before I even eat breakfast, but actually remembering to do them proves to be a challenge without a list. (In fact, I'm quite sure Big E would say that there are days I should probably add, "take a shower" to the list.) If I like lists so much, why don't I have a bucket list?

I found a pretty simple answer, actually. I use lists to help me remember to do things I don't necessarily want to do. Mop the floor.  Call the doctor. Pay the bills. I don't need a list to remember the things I want to do in life because 1) I enjoy them so I remember to do them and 2) I strive to already be doing those things as much as possible (which probably explains why I need a list to remember to take a shower). Not that I'm knocking anyone for having one, but personally, if I really want to travel to all 50 states, I'm probably not going to forget to do this and having it on a list isn't going to make me any more likely to do it. Getting my ass in gear and living is what's going to make me do it.

So, all that rambling brings me to this. I'm just gonna live in the bucket as much as possible and skip the dang list. After all, if I'm living in the bucket, it will be full and much harder to kick.
Posted by Lisa T at 3:33 PM No comments: 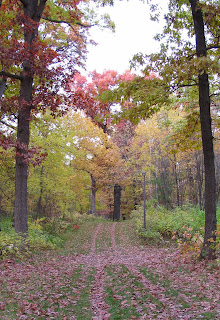 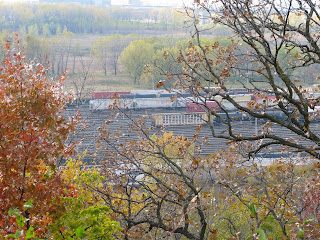 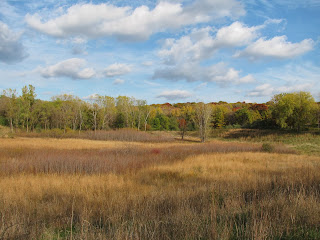 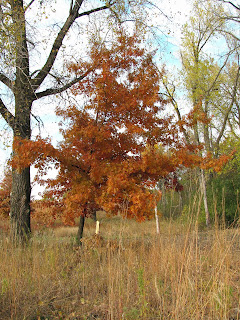 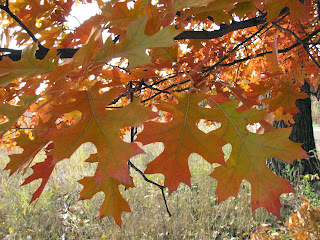 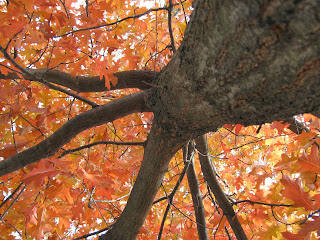 In the end, the old circles will still be there. I can always go back. My new outlook might even make them better.
Posted by Lisa T at 10:26 AM No comments:

This year has been my year of racing simply. No race that costs over $10. I didn't plan this ahead of time, but the first few races of the year were free and I noticed something.  A lot of really amazing stuff happens at these races. When you take away the t-shirt and the glory of the big crowd at the finish line, everyone gets down to the nitty-gritty of why they're racing. It's probably different for everyone, but that doesn't matter. What matters is we're doing it for a reason and not for a prize.

Bike races for $10 or less have been easy to find. Most gravel races are free. Buck Hill and Hillside are $10. Running races have been harder to come by. I found a free 40 miler in July and until this weekend that was it.

Last week, a Facebook friend posted a link to a free half marathon at Lowe's Creek, an unofficial event to test the course for the real deal next year.  I showed up on Saturday with less than 20 other people. Our start line was a card table with a jug of water, some cookies and a piece of paper on which to sign in.

The race director handed me a piece of paper with directions. I panicked. I'm used to reading directions while biking, but while running singletrack? Surely I would break my ankle.

In the pre-race debrief we learned these directions were just for backup. The course was marked with pink tape.

Whew! That will make this much easier on my ankles.

We were also introduced to our lead bike, who would ride just ahead of the leader, showing the way.

There was a quick, "Three, two, one," and we all shuffled off down the trail. No one seemed to want to run in front. I figured now would be my one and only chance in my lifetime to run with the lead bike, even if it was just until the first turn, so I took off after him.

It took less than a mile to realize what a luxury this bike lead was. I didn't have to search for pink tape. I could do what I loved to do, put one foot in front of the other and just run. I felt like I was cheating. I had someone at my every whim. He waited at every turn. If I slowed, he slowed. If I had to go to the bathroom, he......

Oh no. what do I do with this lead bike now that I have to poop?

That's right. Three miles in I had to poop. Normally I would just sneak off in the trees and go, but what was I supposed to say to this kid? "Hey, can you wait for me while I take a dump?" just didn't seem appropriate.

I weighed my options. I didn't want to ask this young guy to wait while I pooped in the woods. The only portapotty was a few minutes off-course. My car was at the halfway point but there was no bathroom there and I certainly wasn't gonna poop in the new car.

I was out of options so I did the only thing I could. I held it for 10 miles and hoped like hell I didn't shit my tights.

Eventually, I could forget, at least for brief moments, that I had to go. Of course, I wasn't encouraged much by that fact that I knew there was no bathroom at the finish, but I figured the faster I got there, the quicker I could go so I ran, as fast as I could, getting back to my own nitty-gritty- that I'm here to give it everything I've got, even if I have to poop.

At the finish, my biker rode ahead, hopping off his bike so I would have at least one person waiting there to cheer. There was no big finish, just the two of us and my time written down on a piece of paper. That was okay by me. I got to race, with a lead biker as an added bonus. I got my nitty-gritty (and I finally got to go find a bathroom).

At the risk of appearing like a total pansy, I'm going to admit I chose my Halloween costume this year based on staying warm. Last's years Bonnie and Clyde get-up was fun, but I froze my ass off.  Robin Hood seemed like a much warmer option. Of course, then it was so warm for the Halloween Hellside race that Big E got to really let it all hang out in his trucker costume.
Oh well, at least I was warm for the race and shenanigans that followed. Pumpkin smashing, pie smashing, beer can smashing, a little forking around.... 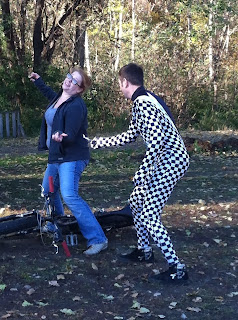 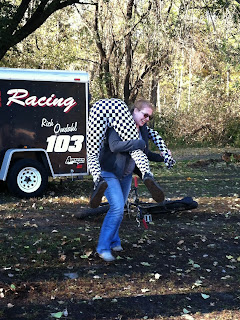 Yes, that is the race director dressed as a flag. At some point he was also a donkey but I'll spare you the creepy pictures. All in all, a fun day filled with shenanigans, adult beverages masquerading as full meals
and lots of good friends.
Although I'm not sure if Jeffro really wants to be this close of friends with Big E.....