If You Ain't First You're Last! 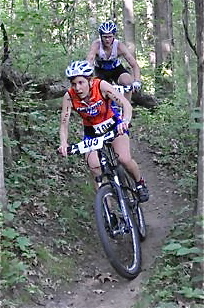 I came in last in my first off-road duathlon. Really, I did.
I was also first and second.
Go ahead- try to figure that one out........
Ok, fine, I'll help you out. I won my age group. I was also the second woman.
Unfortunately, there were only two of us. So I was last.
Just in case you were wondering- coming in last is humbling even when there are only two people.
I was going to give you my list of amazing excuses for not winning. Then I realized the things I was going to use for excuses were the reason I got my butt kicked in the first place. The fact of the matter is- I thought I was more amazing than I was. I thought I could go race my mountain bike for the first time on a trail I didn't know and actually win. I never considered that everyone else was going to ride faster. I wasn't mentally prepared to have grandpas (sorry all you fast g-pas out there) pass me. When they did- I didn't suck it up and ride faster. I slowed down and waited for the run because it's where I'm comfortable. 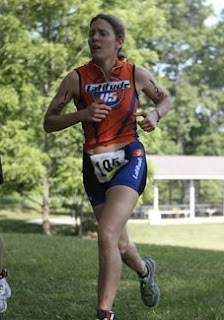 Except running isn't so comfortable when you're trying to pass back the 100 people who just kicked your ass on the bike. Even if some of them are grandpas. And especially when you really have to pee.
After the race, I told my aunt this one was harder than the 50 miler. I know that's a bit of a stretch, because obviously the 50 miler was physically harder. This one was a mental battle though and those are harder to get past. If you're unhappy with how fast you run, it's pretty simple- you train harder. Unfortunately, emotions and thoughts are harder to train. Or at least I think they are, but maybe that's my problem........
Posted by Lisa T at 5:58 PM 3 comments:

This is for D, because she thinks I don't blog anymore. Just for her, my longest post ever. Now send me some chocolate, woman!

I did my first ultramarathon, 50 miles worth, a few weeks ago. I’d like to say the day was perfect, mostly because it ended perfectly. I thought I would finish and say, “I never want to do that again.” Instead, I finished and said, “I cannot wait to do that again.” I blocked out the uncomfortable parts, temporarily thinking the whole day felt amazing.

It wasn’t until the 14 hour drive home the next day that I thought back to the first 25 miles. Quite frankly, if I’m being honest, some of those miles sucked. The first few weren’t bad. In fact, I generally went through the motions of the first 14, probably because it was still before 8 am and I was half asleep. I do recall a guy at mile four, who was walking up a slight incline, saying as I ran by, “The race doesn’t start until mile 40.” I remember thinking that he had a point there, but at the same time wondering how much fun he could possibly have if he was this worried about mile 40 when we were only at mile 4.

Somewhere around mile 15 I rolled my ankle. Then I added a ½ mile to the day by venturing off course. Three or four miles later, when we’d been hiking, scrambling and trying to run uphill for what felt like hours, the guy in front of me must’ve sensed my frustration. He encouraged me, filling me in on a hint that the second half of this course was easier than the first. (This was only partly true, but I believed him so that’s what matters!) A few minutes later, we crested a hill and he said, “These are the best views you’ll get all day. Take it all in because this is why we are here.” We paused for a few moments simply to enjoy it.

A few miles later, we came to an aid station. I was still frustrated with my pace, but when a volunteer told me I was in 7th place, I was buoyed by the hope that I might be able to get into the top five. I refueled quickly and moved on.

A few miles later, I ran side by side with Alex, who I’d met early in the race. We started to chat. I laughed a few times and he pointed out that if I felt this good now, I was probably going to do really well. Right then, everything seemed to change. We ran together for a few miles, catching up to some other runners we’d been with earlier. When we ran by Scott, who’d been behind me when I rolled my ankle, he yelled, “This girl is one tough cookie,” and I was motivated even more. The group of us helped each other stay on course for a few more miles. As we approached the next aid station, I sensed the pace slowing and knew I had to keep moving on my own.

I came into the aid station before mile 28 feeling awesome. Volunteers filled my bottles, handed me my bag of supplies and helped me move on quickly. I was disappointed a mile later to discover I couldn’t stomach any solid food, but I kept up with Gu and water and decided not to worry. I moved through most of the next 5 or 6 miles alone. Eventually, I caught up to another woman. The chance to move up in place after hours alone lifted my spirits. I passed through the next aid station and another 5 or 6 miles in a groove. I felt good. I was smiling. I was confident.

When I got to the bag I had stashed at mile 40, I did the opposite of what I had planned. I thought I would get here and need food or new shoes or Bandaids. Although in hindsight I really could’ve used those bandaids, I really didn’t need a thing. So instead of taking anything out of the bag, I took my Fuelbelt off  and put it in. I realize this could’ve backfired. I could’ve gotten lost or hit the wall and been stuck walking for hours. At the time though all I could think was, “I’m ready to race and this thing is holding me back.” After all, there were two more aid stations and my stomach felt pretty full already.

The next 7 miles were not easy. The “easier” part of the second half of the race was over. Fortunately, my mind and body were, for the most part, fine with this. When I reached the aid station near mile 44, one of the volunteers commented that I must be having a good day to ditch my belt. A mile later, while scrambling up a steep gully, I passed another woman. When I reached the top, I thought I might get a nice easy run down the other side. I was disheartened when I discovered it would be one of the trickiest descents of the day. I remembered what Alex had told me earlier, that the girls at the front were incredibly good technical runners. I was worried that the one I’d just passed on the way up was one of those good technical runners and would pass me right back.

At mile 47, I grabbed a quick snack and drink, not willing to spend too much time for fear I’d be passed. The last 3 miles were mostly downhill with good footing and I finally got my chance. I got to run. They were my fastest three miles of the day. When I crossed under the tunnel not far from the finish, I knew I was almost done. I wanted to slow down so I could enjoy it just a little longer, but I couldn’t hold myself back. I kicked it in, just so I would know I gave it everything I had.  Minutes later, I could barely walk. Hours later, strangers had to help me on and off the shuttle bus to my car.

When I had time to reflect, I decided that I hope that my life takes a similar path to this race. I hope I have the foresight to find the balance between remembering I have a long life to live and enjoying the moment. I hope, when the tough times come, there’s someone there to remind me that at some point it will get easier. By all means, I hope everyone around me reminds me to stop once in awhile and enjoy the view. I do hope though, that I always have the confidence to venture off on my own when I need to. I hope that the second half is easier than the first, with a few challenges thrown in along the way. It never hurts to be kept on my toes. I hope that when I’m 80 percent through I’m still so ready to take it all on that I lighten my load, speed the heck up and beg for an open stretch on which to run. When I get it, I hope I remember to go right ahead and use up every little last bit of myself enjoying the homestretch. 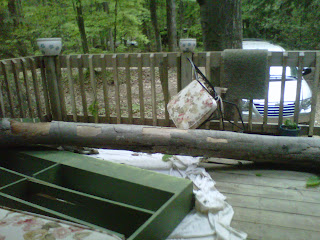 A half an hour earlier, I was sitting in that chair, painting that bookshelf. I went inside for a shower. I was standing in the kitchen making dinner when I heard something hit the side of the house. I looked out the window and the tree was on the ground two feet away. The other half of the trunk landed an inch from the front of my van.

Of course, I'm sure the landlord doesn't think it was his lucky day since now he has to fix the roof and the deck, but hey, it was mine so I'll just be thankful for that!
Posted by Lisa T at 7:31 AM 2 comments: