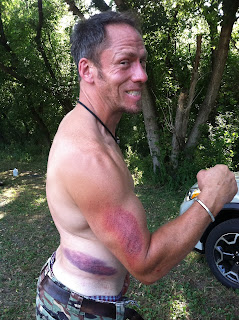 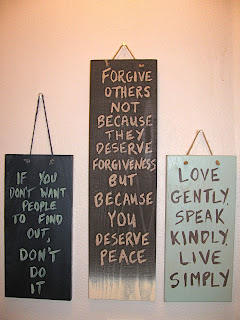 A couple of weeks ago, I got tired of searching for pictures of quotes I wanted to use on the blog. So I decided I should just take the quotes I wanted and paint them on signs. Somehow, between Big E buying me some wood and his buddy giving me even more, that turned into 51 signs. One of those was a special one I made for Big E. Then the neighbor asked if he could buy one while I was painting my heart out in the backyard so now there are 49.  Of course, I already have a list of more to make because once I start a project, I just go full steam ahead until I drop from exhaustion.

Since all I really want to keep is a picture of each one, they will all go up in the new Girl Unsupervised Store.  There are currently only nine because the rest don't have twine yet. As they come, I'll be adding more.  Hopefully at some point, each one will end up here with a story of its own. Of course, if you have a good quote you think I should make into a sign, I'm always open to ideas. Stealing your genius is much easier than inventing my own....
Posted by Lisa T at 8:47 PM 2 comments:

Some decisions in life are harder than others. Usually the tough ones are those in which we aren't sure of the outcome. It's easy to be bold when you know the landing will be soft. It's a lot harder when your have absolutely no idea if you're going to faceplant on gravel or somehow sprout wings and soar. (I'm sure there's something in between the two but I seem to be prone to one or the other.)

Apparently I'm not all that afraid of a frequent faceplant because more often than not I make decisions with no idea of the outcome. I'm kind of an all or nothing gal so it's hard for me to do something with less than all my energy. Trust me, there are days when I wish I knew how to half-ass a job. Unfortunately, in my forty-one years of life, I have yet to perfect this skill. So, when I know I'm done putting my heart into something, I tend to move on, even if I have no idea what's next.

I've made no secret my latest job sucked. Finally, one day a few weeks ago, I decided enough was enough. I changed the date on the already-typed resignation letter on my computer and the deed was done. Do I have another full-time job? No. Could this be a really bad idea? Yes.  Does that scare the crap out of me? Uh-huh. Is that going to stop me? Nope, because in the end, sometimes you have to let go of the crappy stuff in life so you can work your butt off toward something better.

Here's to hoping for wings instead of faceplants.....
Posted by Lisa T at 4:41 PM No comments:

This weekend was an impromtu girls weekend. The girls being me and Chili Uno.... Since she fits nicely in the new car, I packed her up along with a little camping gear and headed toward Cable and some trails. Friday evening, we did a quick loop of my first CAMBA trail, Rock Lake, and then headed to our campsite for a low maintenance, high-fat dinner to fuel up for some exploring on Saturday.
Thankfully Big E had warned me of CAMBA's remoteness so I set out well-prepared (for once) on Saturday. I had my lighter, lots of food, tools, toilet paper, maps....

Unfortunately, there was a gap between my maps somewhere around 20 miles in, where I was trying to cut from one trail to another. Of course, I got curious and followed some CAMBA signs and ended up "misplaced." Thankfully, I still had my sense of direction and knew if I headed north, I'd find a road that headed to my next trailhead.  Along the way, I also found a little something (or somewhere) else......

Of course, I'll admit, my sense of direction only lasted so long and I spent most of miles 20-40 misplaced and then replaced and then misplaced again.  It's hard to look at the map too long when you're being attacked by mosquitoes....

Mile 40ish brought me back to some familiar territory and since I had over 20 miles to go and dusk was approaching, I figured I should head back and bring this adventure to a close for the day.

I have no idea why I thought I the adventure was coming to a close. Maybe because I finally knew where I was? Maybe because I was too tired to think straight? Who knows. All I know is this- as is usually the case, when I thought my adventure was ending it was just starting.  I was, even though I knew my location, entering what the map called "one of the most remote places in Wisconsin."

Did I mention it was dusk?

You can probably imagine what happened next. Yes, that's right, the animals came out. I was cruising along, feeling confident that I knew where I was going and there it was- a big cat on the trail. I could only hope it was a bobcat since the only other option was a young mountain lion, which would likely mean Mama would eat me in seconds.

It scampered off. I started sprinting, hoping there was no mama. Two miles down the trail, I was still sprinting, looking over my shoulder every few seconds, when I encountered a large pile of bear poop.

Excellent. Now there's a bear and a cat and it's getting dark and I'm alone and not very big.

A mile later, heart still racing, I came across the remains of a large bird. The meat was gone. Only feathers remained.

Terrific. Now there's a bear and a cat and some kind of bird murderer and it's getting dark and I'm alone and not very big.

Needless to say, I discovered I can sprint 7 miles of trail when I really need to. Turns out, there are things that frighten me more than being chased by a dog on a gravel road.

After refueling with more hot dogs Saturday night, I decided to stick to less remote territory on Sunday.
Not that I don't like to explore the remote stuff, but I can only sprint from the wild animals so much in one weekend.....

All in a Week's Fun

It's summer so we should pack in the fun, right? This sums up the last week or so....

A 40 mile ultra marathon:
The garden bounty:
Chasing dragonflies in the yard:

Backyard art project in the works: