Lessons from the Dirty B

When Martin asked me shortly after Alexander if I wanted to do the Westside Dirty Benjamin, I figured what the hell, why not? Since the cross bike was still pretty much destroyed from the last adventure, I decided this would be a good time to try a long gravel ride on Chili Uno. Big E set her up with a taller gear and some faster tires and she was good to go.  (At some point I should probably step in and admit I can change my own tires, but this is kinda like working the "I just rode 389 miles" thing-if you've got a good thing going why ruin it?)

As usual, I learned a few things over the course of the day.....


Top 7 Things I Learned at the Dirty B


7. Salami sandwiches are still one of the best long ride fuels ever. Who wouldn't like a little salt and fat in the middle of a race?

6. If "BRAAPPP" and some arrows are painted on the pavement, you should probably get up some speed for the muddy section coming up. (Too bad I didn't ask Big E what BRAAPPP meant before the race.)

5. If you see a large storm brewing in front of you, you're probably not going to be able to ride around it, but the power of positive thinking will at least keep you going until you're dead smack in the middle of it. As usual, the best way out is always through.

4. The heavy rain will wash off all evidence that you put your foot down in the mud in that BRAAPP section.

3. Singlespeeding is awesome, especially when the weather turns nasty because you don't have to worry that the horrible sound on your bike is coming from the derailleurs.

2. Drafting is boring. If I can have it easy and stare at someone's wheel for 107 miles or work harder and see the scenery, I'll worker harder every time. Then I can check out turtles, monitor the approaching storm, scout for a good place to pee....

1. If you plan to stop and and pee in the bushes, make sure you have Deep Woods Off on your ass. It's June. It's Minnesota. The mosquitoes only need 5 seconds to do some serious damage.
Posted by Lisa T at 8:32 AM 1 comment:

You know the Robert Frost quote, "Two roads diverged in a woods and I, I took the one less traveled by"? It's probably no surprise it's a favorite. I'm a fan of the remote trail, the back road, the bushwhacked route....  However, it occurred to me today though when I arrived here: 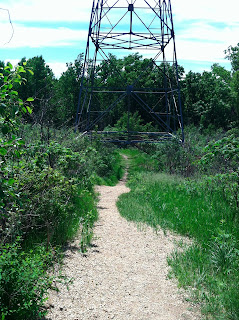 that the two roads, my less traveled one and the more civilized one, often converge in odd places. (Especially when I ride as fast as possible past signs that may forbid me to travel my chosen path.)

I guess the key to staying on the less traveled path is just to accept the occasional convergence and welcome the next divergence as it comes. 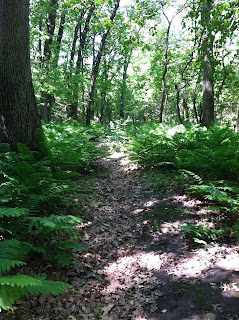 The same is true with the inevitable convergence of play and work. When it happens, I find it helps to play until the very last second, rush into work in bike clothes, dig through the stash under my desk to find an acceptable outfit (and perhaps a snack), and proceed to be as productive as possible to make my time there shorter.
I'm sure the challenge of balancing a love of adventure with the necessity of work is not unique to me, although I do think it challenges some of us more than others, resulting in endless restlessness. The challenge will always be to find a way to stay on that less traveled path as much as possible....(and out of those really uncomfortable boots under my desk as much as possible!) 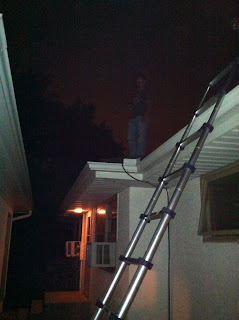 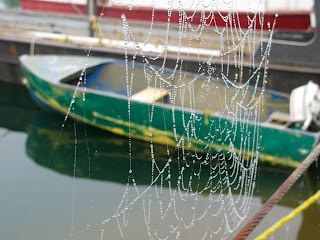 I will be honest. I didn't run after work yesterday because I really wanted to run. I ran because I really needed a stiff drink and it was only 7pm. I figured running would at least prevent me from being hammered by 8.

I opted for pavement since it was drizzling. Less than a mile down the ghetto bike path, I saw some graffiti. "Liv Grace" it said.  My rational side realized this was probably someone's name. My still pissed-off-but-needing-inspiration side decided perhaps this was a sign, a reminder to live graciously.

A few years ago, my mom went to a women's retreat. She was asked to write letters to her daughters telling us three things she appreciated about us.  The first two things she wrote didn't strike me much. I'd heard them before. Everyone knew I was independent. However, the third thing she said she appreciated was that I was gracious.

When I thought of gracious, I pictured elegant ladies hosting dinner parties. Surely she couldn't mean me. I kind of figured she meant grateful and let it go.

Yesterday, after my graffiti revelation, I decided to look it up. According to Merriam-Webster gracious means, "characterized by charm, good taste, generosity of spirit and the tasteful leisure of wealth and good breeding."

Charming? Nope. Good taste? Nope. Tasteful leisure of wealth? Definite nope. Good breeding? Well, perhaps, but considering mom's assignment, probably not what she meant.  Generosity of spirit? Hmm- I kinda like that one.

Is it possible that she saw that in me? I hope so because that sounds pretty cool.  Essentially, to me it means "giving of one's soul or true self." Damn- I strive to be that. I hope I'm like that even just a small part of every day. I really hope that's what she meant. So much better than charming....

So back, to this "Liv Grace" thing. Perhaps it was a reminder to keep giving all of me and stay true to me, even when it's not easy. In fact, perhaps that is when it is most important.
Posted by Lisa T at 8:32 PM 4 comments:

My rear end has finally healed after Alexander. This is a good thing because I'd started to replace all the hours on the bike with obsessive house-cleaning. Not that this is necessarily a bad thing, but I'd reached the point of scrubbing floor boards with a toothbrush. Enough said. Time on the bike was necessary.

I started with a ride to work. My office mates have come to accept the collection of shoes stashed under my desk. I can ride to work with a backpack filled with lunch and a dress, then ditch the backpack and go exploring on the ride home.

Of course, after two weeks with no exploring, I got distracted on the way TO work instead. 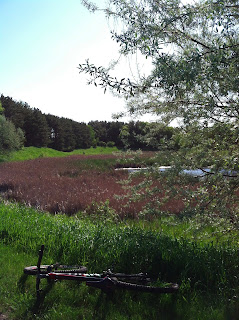 The MI girl in me still finds it necessary to examine every body of water in MN in the hopes that one might actually be as clean as Lake Michigan. Let's just say, I rarely ever even dip my big toe into the water here.

Thankfully I discovered I can cut through the woods and across the back lawn at work, which allows me to slink through the back door and pretend I was there much earlier....at least until one of the students in a back classroom sees me out the window.

Chili Uno and I ventured out again after work, determined to explore some new territory on a tip from The Discerning Hobo.

We found the firepit of all firepits. 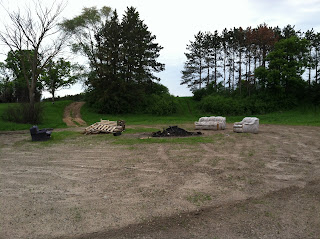 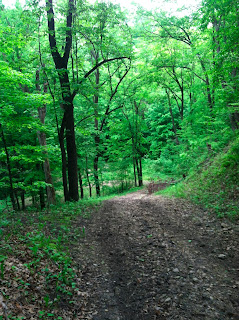 To the tiniest slot canyon ever. 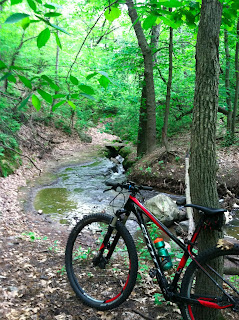 This deer decided to follow us down, not the least bit deterred by my shooing. 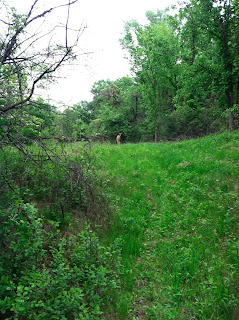 Apparently I look like a deer, or smell like one or am simply just too small to be scary. Big E says he's going to take me hunting, make me sit in field until the deer come and then shoot them when they get next to me.

Ummmm....not the romantic hunting weekend I had pictured in my head, but maybe we can compromise.