They say a picture is worth 1,000 words. Quite frankly, it would probably take me at least twice that to thoroughly explain this one, but I promise I'll try to keep it brief. This is a blog after all, not a novel, and no one really wants to really 1,000 words of my nonsense. Even I don't find myself that amusing. (Ok, maybe I do occasionally but I'll still try to keep it down.)

I'll start with who. That one is easy. That is me there dressed to rob banks....or go hunting....

Which leads to the what. I really wasn't robbing a bank or shooting stuff. I was riding my bike of course. Well, I mean obviously I wasn't riding right then, but I'd just finished riding in what were probably temps around zero degrees. It was a bit cold, in case you hadn't noticed.

Which of course gets us to why, which is where I'll have to try not to use my 1,000 words. Why exactly, was I dressed like this at a bike race? Let me try to explain. It was cold. Had I mentioned this? At the start line, I convinced my Partner in Crime (The PIC) to race two laps with me, even though it was her first fat bike race. This meant, of course, that I actually had to ride two laps in these crazy cold temps.

Normally two laps at Hillside wouldn't be that big of a deal, but when you choose to do it in zero-ish temps, things don't always work normally. For instance, less than an hour into the race, I managed to get my last sip of water before both my insulated bottle and my Camelbak (which was inside my jacket!) froze. Thankfully, The PIC's awesome hubby was out on the course in his sleeping bag and lawn chair and saved me from complete dehydration by supplying me with Chai tea and whiskey on lap two. (Never thought I'd use lawn chair, sleeping bag, Chai tea and whiskey in the same sentence.) However, despite how grateful I was for these treats, I was still forced to find alternate hydration by shoving snow in my face for the rest of the race. Again, this might not normally be that big of a deal, but it was so ridiculously cold that any snow that hit my face instead of my mouth immediately froze there, making some type of ice mask around my mouth.

Long story short, but the time I finished, my face was so numb I could barely talk and I sounded drunk, which I tried to explain to the awesome K Flanders at the finish as he fed me more whiskey. At some point I realized it was completely pointless to try to explain that I wasn't drunk while drinking whiskey so I gave up and went to the truck to change. Once there, I put on everything I could find, including my face mask and warmest hat. Then I went to the fire to beg The PIC not to hate me for talking her into this whole thing. She summed up the race nicely by explaining that she was questioning who she was on lap two. (I think that might mean she doesn't hate me, but I'm not sure. I guess we'll find out if she ever agrees to accompany me on an adventure again.)

Anyway, shortly after that conversation, The PIC and I got called up for our prizes and posed for pictures, after which I realized that I was still so cold I'd forgotten I was even wearing the mask. While I was making fun of myself for wearing it for the pictures, this lovely shot was taken and there you have it- my less than 1,000 word explanation for the creepy face mask.

Now, how many words do you think I might need to explain what J-Man is doing with the ketchup in this after-race party photo? 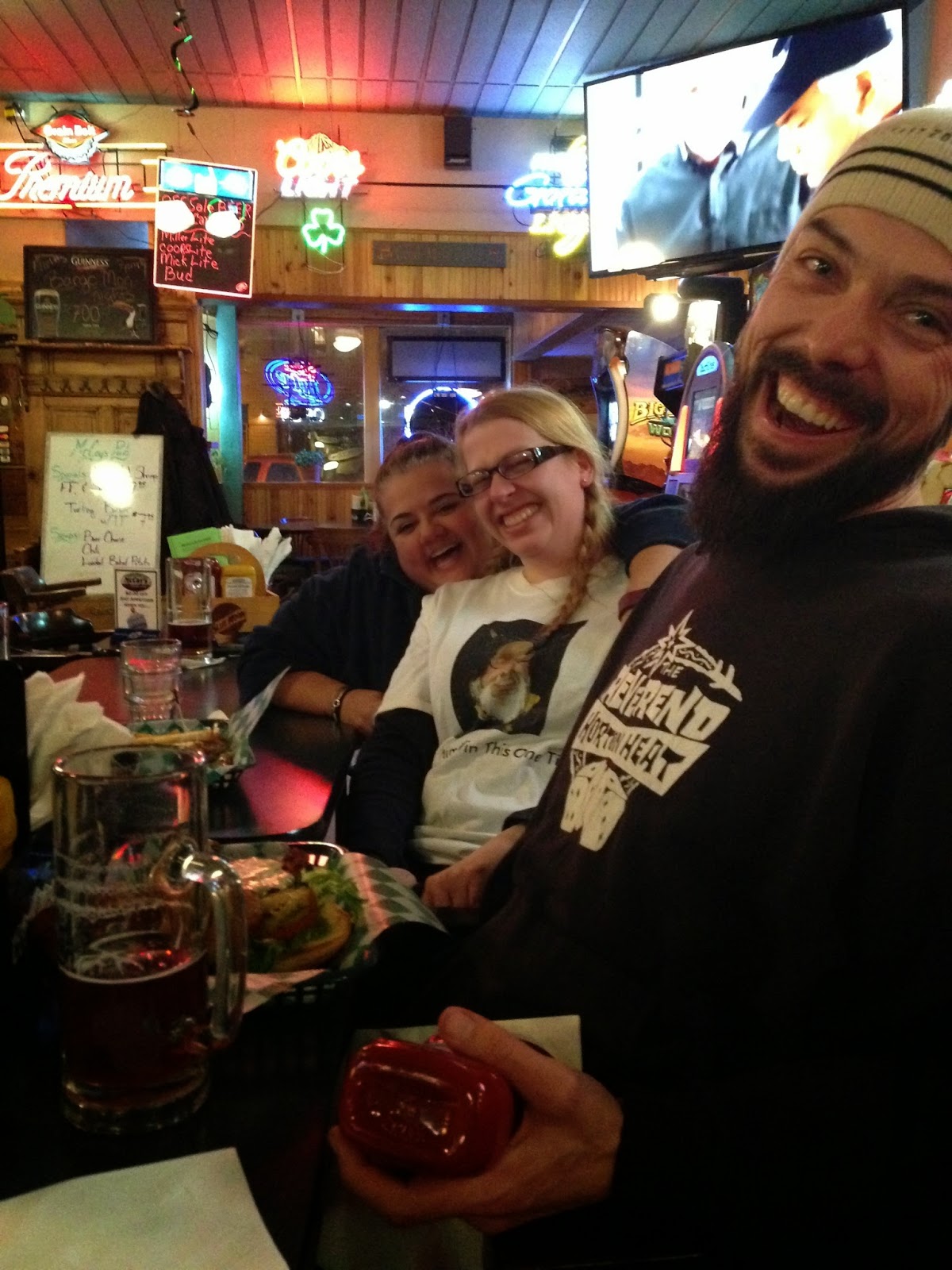