It's official. My insistence on saying "yes" to everything has made me busy. Things that have happened in the last month:

1. I turned the sheet-rocked room pictured in my last blog into a massage room. It was a whirlwind of a weekend but somehow I managed to have it presentable in 3 days. Trophy was treated to the first massage. 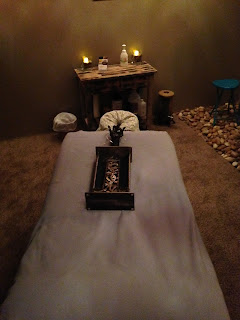 The baseboard still isn't nailed into place and I already had to kill a mouse, but hey, it's presentable and it smells good.

2. In the process I learned that applying joint compound is fun. (Despite the fact that I don't seem to want it on my hands in this picture. And yes, I am applying it with a stir stick. I work with what I have.) 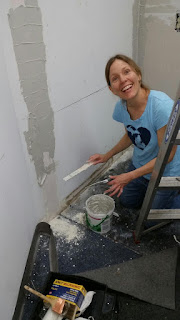 3. I also learned that sanding that same compound down sucks. There were no smiling pictures from that evening.

4.Once I had the room ready, my business had its best month in over a year in that new space. I'll take that as a good sign. Apparently hearing rap music through the door isn't turning anyone off. Who knows, maybe the mixture of heavy beats from the gym and mellow massage music is working some kind of magic on people.

3. I went to my Congressional District meeting as a delegate and I didn't slap anyone. This was quite a challenge since the only acceptable outfit I owned was purple and Prince had just died. By the end of the day I needed a badge that read "NO I'M NOT WEARING PURPLE BECAUSE PRINCE DIED" because if I'd had to answer that question one more time, I would've just disrobed then and there to save myself the torture of hearing it again. I'm pretty sure the Kasich supporters would've had a heart attack had this happened since I was proudly wearing his sticker (on my purple shirt of course) in a room full of Cruz fans.

4. I scored another awesome part time job, which then overlapped with the one I already had during the busiest month of my business in a year. So, last Friday I didn't sit down (except on my bike to my office) from 6:45am until 6:30pm, at which point I sat down to work the new job for four hours. I'm just happy to find a part time job where I can actually sit. My legs are thanking me already.

5. Since my new office is in a gym, I decided to jump into some of the group workouts that take place. Let's just say this- my willingness to say "yes" is being put to the test, but so far, I've managed to avoid any "Oh hell no" responses when I'm asked to do things like glute bridge 1 1/2 times my body weight.

6. That said, I've discovered a new kind DOMS (delayed onset muscle soreness) which prefers to take up residence in my ass. As I put it yesterday, "Well, at least I know I have a glute medius."