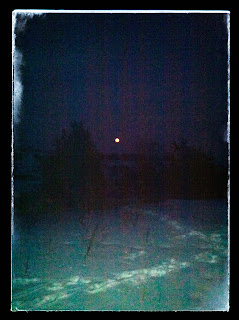 Followed some deer tracks to try to get closer to the big orange moon...even though I know that's not possible. Sometimes you just gotta try. 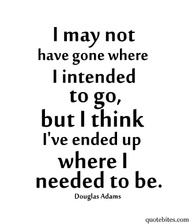 They say we should live every day like it's our last. I like that idea. It's just sometimes a bit ambitious. I mean, I really want to live like that, but sometimes I lose sight of that lofty goal. So I decided perhaps I need some more attainable goals I can reach in the meantime. I've decided to start with this:

Live every day like it's the last good day of snow.

Friday brought us some fresh snow. I watched out the window at work, knowing that with each passing minute I was losing my chance for first tracks. When the devil leading my meeting finally wrapped up her attempt to buy my soul, I dashed out the door and headed to the trail.

I figured I'd certainly be following in the tracks of those who'd gotten off work before me, but after following fresh snow shoe tracks for a couple of miles, I came around the corner and was treated with this: 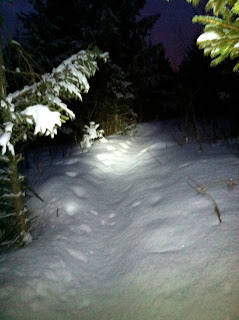 Excellent. Day one of snow was treated as if it were the last. Night one wasn't too bad either- friends from out of town, homemade pot pies, moonshine, scotch.....

Of course all of this made the morning of day two a little brutal. There exists out there somewhere a picture of Li'l Dave and I puffy-eyed on Big E's couch at 9 am looking much more prepared to watch cartoons that we did to ride our bikes.  However, the snow beckoned (really, Big E finally just put us both in the truck and started driving to the trail)  and the boys let me tag along for a few hours in the fresh stuff.

Excellent. Day two of snow was treated as if it were the last. Night two was just as a exciting, although we toned it down and drank whiskey instead.

Day three started at 10 am. Yes, I know, I was wasting precious snow time by sleeping in. Have no fear- I did finally make an appearance outdoors, although I traded the bike for skis. 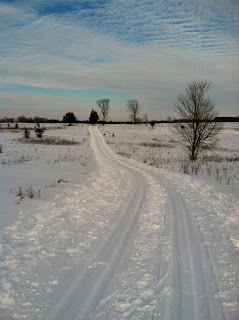 Excellent. Day three treated as if it were the last.

After a week of rest trying to rid my body of mucus, I finally ventured outside on Sunday. A little exploring was in order. I didn't have to go far to find unlimited fat bike potential. 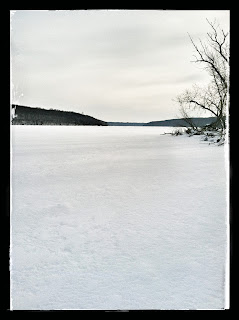 Or at least I thought so. I even considered riding right on over to Wisconsin. Of course, all those ambitious thoughts occurred while I was riding on the snow covered part of the river. As soon as I got this glimpse of ice and could actually confirm that I was, in fact, riding on (frozen) water I wasn't nearly as brave. 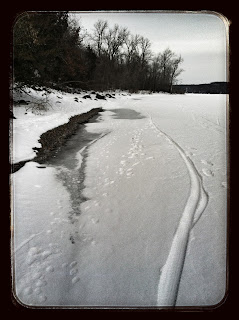 Ya, ya, ya, I know the fat bike floats, but I prefer to stay dry when it's below 30 degrees. Plus, does it really help to have a floatie when you're trapped under the ice? So, I kept my adventure in Minnesota and rode close to shore. Some days the sane side wins. 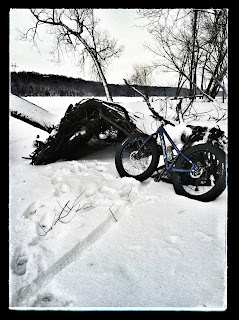 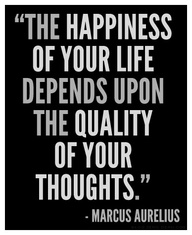 "Life is good if you will it to be," was Pop's response to my last post. There were a couple of sentences in there too, reminding me that he's proud of me. That sentence stood out though. I'm blessed to have received healthy doses of his optimism for 41 years.

I've learned from him that the best part of being positive is this- who we are starts to wear off on everyone around us. The key is making sure your positive wears off on them more than their negative wears off on you. So, go out into the world and


Be the person you wish everyone else was. 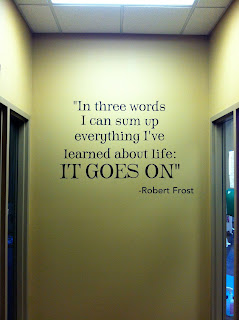 I see this everyday at my new job when I walk from my classroom to my office. I'd like to say all of us who work there are inspired by these great quotes on the wall, but I'm pretty sure that's not the case. After I see this, I turn right down the hallway and enter my office. Unfortunately, there is no inspirational quote on the door. There probably once was. I'm pretty sure someone probably took it down with the grand intention of replacing it with a sign that said, "Enter at your own risk."

The girls in the office probably ate that person for lunch before she had the chance.

I'm still not entirely used to the constant f-bombs, let alone the minute by minute update as to who is "hated" today. Quite frankly, I'm proud of this. I think my Pop would be proud too to know that he raised a daughter who doesn't really grasp of the concept of hate, let alone feel it on a daily basis.

That said, after a month at the new job I can sum up what I know about my state of mind in the midst of chaos and negativity:

It took a couple of weeks, but then I figured it out.  I have a choice there, like I do everywhere else. I can let the hate bring me down or I can go right on being me. I can either choose to let their negativity wear off on me and end up learning their hate and misery or I can go on the way I'm happy being. And so....

Of course, at least once a day I go right on down to someone else's office and raid her candy dish. Hey- I didn't say I had this perfected yet. It's a work in progress, but I'm actually enjoying the learning experience. I've discovered I actually have thicker skin than I ever gave myself credit for. I have a feeling that discovery will come in handy one day. I've also discovered that I still can't seriously drop an F-bomb. (Because according to my office mates it doesn't count if I giggle or immediately apologize.)  Pop, I hope that makes you proud too....
Posted by Lisa T at 7:47 PM No comments: