I've been pretty inspired lately by my new outlook on dealing with fear. Until a few weeks ago, I had no idea how often I was letting fear get in my way. Obviously, I knew I was using some pretty extreme avoidance tactics post head injury in order to drive every day without getting on the freeway or going over any bridges. Of course, if you live in the Twin Cities you know that at some point this became impossible if I wanted to get anywhere west of my house. Unfortunately, we have this thing called the Mississippi River. Turns out you have to drive over a bridge to get to the other side. At some point during the summer I finally forced myself to start doing this, mostly because the amazing Dana B. has her office on the other side of the river and I needed a massage. So, I pushed my fear aside and drove over the 494 bridge like a granny to see Dana.

Fast forward to a few weeks ago when I decided to change my outlook on fear and realized that perhaps facing this fear instead of constantly burying it might be a good idea. I recalled a conversation with Mama Liz last summer when I told her that maybe someday I would just ride my bike out onto that 494 bridge and stand there until it wasn't scary anymore. Since it was nearly 50 degrees yesterday, I figured it was as good a day as any to go hang out on the bridge. 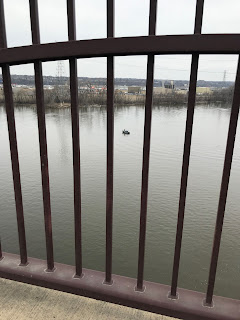 At first the old fear-induced dizziness came back, but, funny thing, when I just let it be instead of trying to make it go away, it passed in its own time and there I was, pretty darn comfortable on the bridge. I mean, I didn't to any head stands or stand on the top of the railing or anything, but hey, baby steps.

I did get over the bridge phobia enough to take a ride out onto the old swing bridge later in the ride though. 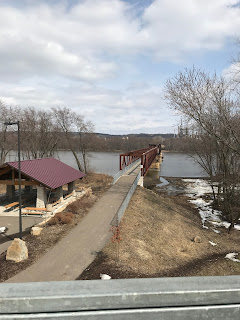 I admit, I was pretty thankful it doesn't actually swing. Again, baby steps.

I know, these probably seem like little things, and actually when I finally did them they really were pretty minor. No panic attacks or meltdowns. The cool thing though- facing these fears of physical things is helping me face some of my other fears, which are really the ones that probably affect my life the most.

That fear of judgment I wrote about a few weeks ago- it's really been on my mind. Sometimes you just finally realize how much something affects you and it motivates you to do things you never thought you could do so that you can make it better. That's me and this whole fear of judgment thing.

So, this week, I had a tough conversation, one that a year ago I would've done everything in my power to avoid. I would've just disappeared and considered it over, never realizing what a great opportunity speaking up could've been- for me and the other person. Of course, when I finally had that tough conversation, and gave someone the chance to explain themselves, I realized that this person, who I thought was treating me a certain way out of dislike or judgment, was really treating me a certain way because he simply thought I could handle it. Apparently my happy-go-lucky attitude, combined with the fact that I can run for an absurd amount of hours on end, makes me appear to be tough as nails.

Of course, once I gave someone the chance to explain this, I discovered a lot more about myself than I would've had I just run away. As an added bonus, that person also got some feedback that might help him the the future too, something that would've never happened if I'd stayed quiet out of fear of judgment.

Now, hopefully facing this bridge fear and my fear of judgment will help me move past my fear of moving water before HAMR this summer. I'm told I have to cross the river a couple times with my bike and I really don't want to carry a life jacket for 170 miles. My bike floats, right?
Posted by Lisa T at 6:54 PM No comments:

I'm pretty sure I've written this blog post 100 times in my head. Somehow though, it always stays there and I'm unable to find the words to express it in a way that won't piss a lot of people off. Honestly, I'm not sure I know even now how to express it without pissing people off, but since I'm tackling my immense fear of judgment head on, we'll just consider this post a lesson in facing my fears.

I'm tired of other people telling me my life is easy. Don't get me wrong- I know I have a pretty sweet life. What girl wouldn't want her own business, a hot guy (who smells really good) and a high metabolism? So, yes, I know I have it great. I will never argue with that. I'm just really sick of the idea that getting all this awesomeness was "easy". That business I run? I worked 39 hours a week at a YMCA while I got it started. I still work at least one, sometimes 5 or 6, part time jobs a year to keep it going. That hot guy? I waited 40 years for him. I was alone for a lot of those. That high metabolism? Yeah, a lot of it came from my mama, but hours a day of exercise certainly isn't hurting.

So "easy" is all relative here. My life is "easy" because I make it that way. I work hard for what I want and when I get it, I appreciate the hell out of it. I refuse to join in our society's competition to see who can be busier, more stressed and more exhausted. We've gotten in this bad habit as humans to look at where someone else is and forget what they might have been through to get there.

Case in point- Marji Gesick 100. Here's the picture most people saw:
The elation of finishing. The fun part. What I got out of 7 months of training.

Here's the picture not nearly as many people saw:

Let me tell you about this picture. I'm walking through Jackson Mine Park with 15 miles to go. Since I'd run the 50 the year before I knew about what time I needed to be here to finish under 30 hours and be the first person to get a buckle. I'd been on pace to do that for close to 24 hours, but about an hour before Stacie took this picture I realized I'd fallen off the pace quite quickly. My mind wanted more than anything to run, but every time it tried to relay that message to my body, my body gave it the finger. This picture captured my lowest moment. The one when I wondered how the hell I was going to finish this thing. After she took this picture, I walked around the corner to Super Kate, said, "I need to get my shit together", sat down in a lawn chair and stuffed my face with mashed potatoes. Somehow, fueled by cheesy mashed potatoes and some motivation from Kate (and the support all along from countless other people), I got off my butt and made it to that last picture and the amazing feeling that came with it.

Behind one picture that showed a moment of pure joy, were hours of suffering, a huge support crew and months of training. Judging just that one picture certainly doesn't give justice to all of that. Neither does judging someone just by the present moment of their life.  Saying, "It must be nice," or "So and so's life is so much harder than yours," completely negates how much work they might have put in to get where they are.

So let's all just stop. Let's stop competing to have the harder life. Let's stop assuming anyone has it "easier" than us. The next time we see someone who has something we want, instead of saying, "It must be nice," let's stop and ask their story. When we listen to it, we might just learn how to get the sweet life they have, instead of living the rest of our lives wishing we could have it.