It's almost Thanksgiving- that time of year when we'll all be gathered together with our loved ones feeling blessed. We hope. It seems this year a lot of us are stressed about being gathered together and.....feeling pissed off if someone mentions the recent election. Trust me, I don't really want to talk about it either since I got my ass kicked. So, here you go, my handy-dandy, "Thanksgiving, Non-Political Conversation Starters."You know, that random thing you can say when someone starts a conversation with, "I can't believe all the morons who voted........."  Mine will come complete with answers for you.


1. What's the most memorable Thanksgiving you've ever had? (When Mom and Pop came to my place in San Diego.)

2. What's one dish you wish we never had on Thanksgiving? (Pumpkin Pie- the texture makes me queasy)

3. If you had to eat just one of these leftovers for the next year, which would it be? (Mashed potatoes)

4. Not counting today, who was the last person you hugged and why? (Big E, because I hug him multiple times a day.)

5. If you had to go without one article of clothing for the rest of your life what would it be? (Underwear, of course. It's optional, right?)

6. If you had to chose only one article of clothing for the rest of your life what would it be? (Running shoes. Duh.)

7. Where is the weirdest place you've ever dropped your own undies? (On the counter at LuLuLemon.)

8. If you could hide somewhere and spy for a day, where would it be? (In any gym where the Rock is working out.)

9. If you had to pick someone to illustrate your childhood, who would be most suited? (Norman Rockwell [although Pop would probably say Charles Schulz because he thinks I'm Pigpen])

10. What's your biggest quirk? (I still twirl my hair around my fingers when I'm tired or nervous. Contrary to the doc's opinion when I was a kid, I still don't have a bald spot.)

11. If you could video tape yourself doing one thing and leave it as your legacy, what you would be doing? (Laughing)


Of course, feel free to add your own. The most important thing is that you listen to the answers.
Posted by Lisa T at 7:56 PM No comments:

Why You Should Get Your Ass Out of Bed Tomorrow

After a 5 month hiatus, the blog has been turned back on. When I was talked into running for office, I decided that perhaps leaving public a sometimes raunchy, rarely politically correct and always blatantly honest blog was perhaps not the best idea. I briefly contemplated just hiding the naughtiest posts. Then Big E reminded me that would be all of them. He is always the voice of reason in our house.

For most of the summer, I was too busy to write a single sentence anyway, but a few weeks ago, something happened that compelled me to break my silence. Since it was the height of my door to door campaign, the words had to wait until today. I figure with less than 6 hours to go, no one's going to be able to do much damage if they find a few blog posts where I dropped the F bomb.

Anyway, back to that incident a few weeks ago. I was running with a friend and she told me how two of her clients had cancelled their appointments the day after the presidential town hall because they were too depressed to get out of bed. I was shocked, for many reasons, not the least of which is that fact that the last thing any of us should do if we're afraid of who will become president is hide in bed. That's precisely what got us into this mess.

We've spent the last I don't know how many years dividing ourselves, hiding in our homes while slamming those who disagree with us on Facebook and blaming our problems on anyone who doesn't belong to our political party. It should come as no surprise to any of us that this resulted in some pretty crappy choices for president. Hiding under the covers when one of them becomes president and spending the next four years complaining about it isn't going to solve the problem. Neither will moving to Canada.

I get it, a lot of people are going to be disappointed tomorrow. Trust me, the thousands of us who ran for office this year will be among those people. Over half of us won't win. Over half of us will have spent months in our districts going door to door trying to convince people to vote for us. A loss tomorrow means that didn't work. Many of us ran in districts considered safe for our opponents, which means we chose to do all that work despite the fact that we'd likely lose.

In my case, I'm running as a Republican in a district that typically votes 70-75% DFL.  My only chance of winning was to go door to door and convince people to stop voting for parties and start voting for people. Unfortunately, my district also contains quite a few dangerous neighborhoods. So basically, along with the inevitable things that happened, like doors slammed in my face, I encountered enough scary shit to change my outlook on life just a little bit.

There was the day three different people told me I shouldn't be by myself in a neighborhood because of frequent gunshots. There were many days when my longest conversations were with people so strung out on drugs they didn't know where they were. There was the day a man was found wandering down the street bleeding from a knife wound shortly after I'd been there. A few days after that, two guys tried to lure me into their car. (I'm pretty sure the presence of my pepper spray made them reconsider wanting to become my pimp.) The same day, a man took my flyer and stuck it down the front of his hospital pants.

All that happened in the better neighborhoods. In an attempt to reach out to the people in more dangerous areas and apartment buildings, I sent postcards and advertised on Facebook. I stuck to a positive ad. After all, everyone complains about the negative ads so surely they don't want them, right? I quickly discovered that trying to spread positivity on Facebook is like trying to sell veggies in a candy store. The alternative is cheap, easy and offers too much of a quick fix for people to resist. After 10 days, I finally took the damn ad down. I tolerated some fool who kept trying to accuse me of just wanting to fight ISIS (apparently that's all Republicans want to do), but when someone tried to turn the whole thing into a negative ad against a city council person who isn't up for re-election and isn't in my district, I'd had enough.

In the middle of all of this, our house was burglarized. I came home in the middle of the day to the door pried open and the sinking feeling that someone was still inside. While it was quite interesting to witness how the K9 unit searches a house, I was kind of hoping it would never be my own. An hour later, I sat down on our couch and bawled my eyes out. When I was finished I got up and drove to the bank to start the long process of closing accounts and opening new ones. The next day, I got out of bed and kept going door to door. Trust me, I wanted to stay under the covers. At this point, I was literally afraid of my own reflection in people's front door. I screamed at myself. Twice. But I wasn't giving up and staying in bed.  I came close a couple days later when a drug dealer shamed me for running as a Republican, but I didn't. I cried walking to the next house, but I refused to give up.

When I wake up tomorrow morning and likely haven't won, I won't then either. Why? After all that, after witnessing so much of the crappy side of humanity in my own neighborhood, why not? I mean, seriously, I just spent 5 months walking the streets near my own house and discovered that it would be easier to score drugs or turn a few tricks there than it would be to change many minds. So why not just throw in the towel on life tomorrow and stay in bed?

Because a whole lot of people, many of them friends and family who can't even vote for me, donated to my campaign. Because many of those same friends came to a bike scavenger hunt near my house and handed out my cards to my neighbors, even though they identify with the "other" political party. Because this morning, this happened in MI: 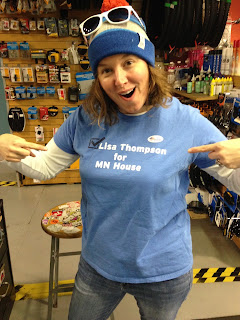 Because between all the crazy stuff that happened while door knocking, there were some great conversations that happened on the front porches of total strangers. Because my neighbor, who didn't know me until June and is fighting cancer, visited over 2,000 homes with my flyers. Because I know I changed a few minds, convinced a few people that it's not all about the party. It's about the people.

That's why we should get out of bed tomorrow no matter what. Because it's not about our president. It's about us. It's about how we treat each other. It's about taking some time to listen to someone different from you. It's about refusing to draw lines in the sand and stepping over them when someone else does. It's about refusing to let our politicians define us. They only matter to the extent that we let them matter. We have the choice to go out there and try to change things, no matter who our president, mayor, state rep or city council person is. As long as that's the case, I'm getting my ass out of bed. What are you going to do with yours?
Posted by Lisa T at 12:54 PM 1 comment: