We were told at the beginning of Dirt Wirx Bike Week that by the end we'd hate Richie and the crew. It's hard to hate a crew that puts so much into their trail and races, but then, Hillside is one hell of a hard trail, so I knew anything was possible. Plus, you never know when this crew might make you try to ride up the stairs instead of down, chug a beer for a time bonus or carry a log for your Le Mans start.

To be honest, I started out just wanting to race the 25 Hour race, but then I got excited and wanted to try for the overall win for the week. This meant a lot of firsts. I'd never done short track or dual slalom. I'd never raced expert in cross country, which I needed to do to win the week. Technically, I'd also never ridden singletrack for 25 hours, although I guess 24 is pretty close.  So, I prepared myself to spent the week nervous and hoping not to crash.

Saturday, June 6, 11am: Time Trial, one of my favorite kinds of races. Didn't hate Richie.

Saturday, June 6, 4pm: Discovered the expert women had to race the short track with comp men. Thought about hating Richie.  Tried not to throw up on the start line. Thankfully didn't get run over and actually had fun once I could breathe. Decided not to hate Richie, especially after he raced the expert men's race like this: 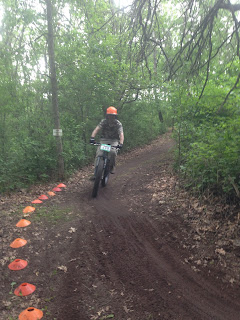 Sunday, June 7: Cross Country Race. Again, terrified at the start. I'm not a fan of starting in front of the comp men. I don't like to be run over. My douchebag bell was installed on my bike, just in case someone tried to pass like a moron. Thankfully, I never needed it and once I relaxed I actually had a blast.
No hating on anyone.

After the race we celebrated Big E's birthday. Fun times with lots of fun people. It started like this: 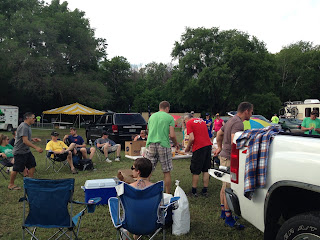 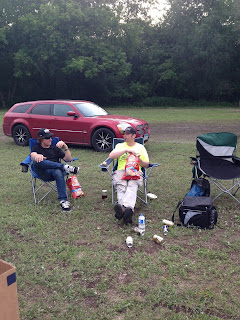 Wednesday, June 10: I was so nervous I showed up hours early for the Dual Slalom. Numerous practice runs didn't calm my nerves. Pretty sure my heart rate hit its max on the start line. Didn't crash so I didn't hate Richie, but I'm not admitting it was fun.

Saturday, June 13: The 25 Hour Race, my favorite. I was in second place overall for the week, 34 points down. Points for this race were by lap instead of place. For each lap you completed, you received that many points- 1 point for lap one, 2 points for lap two, three for lap 3, etc.  So, I needed to ride three more laps than the leader, Rebecca, to win the week. A tall task since she'd ridden nearly 10 minutes faster per lap in the cross country race. Lucky for me, she wasn't going to ride at night.

The first five laps flew by. I stopped only to pee, taking bottle hand-ups from Eddie and Joshua, who were riding a four-man team with Richie and the other race director, Dave. After a quick stop at lap five, I managed three more laps before dark, with a brief stop for ice cream at the Super Sue station, at which point I found it necessary to down nearly an entire pint of butter pecan in minutes. (Tasted great at the time, but let's just say it's a good thing no one was riding behind me later.)

I checked in with Dave after lap eight and learned I had a one lap lead over both Rebecca and Pam, who both appeared to have gone to bed. I switched to the fat bike and kept pushing, hoping to have a five lap lead when they woke up. I figured they both would start lapping me in the morning and I didn't want to leave anything to chance. The first two laps in the dark weren't too bad, despite one too-close encounter with a tree. Lap three, however, brought on what I've decided is the inevitable meltdown that happens in these races. I stumbled in around 1:30, put on my PJs and laid down for what I've also decided is the inevitable "roll around and not fall asleep" that happens in these races.

Two hours later, sleepless, I got back on the bike. As I finished lap 12 the sun came up and as I pulled into the camping area Rebecca was preparing to ride. I grabbed some coffee and prepared myself to get lapped. I just hoped it would only be twice. At the end of lap 14, I was still hanging onto my lead and stopped for food confident that I'd be off riding again in five minutes.

Let's just say a colossal meltdown ensued. The kind where you wonder if you can stand up, let alone pedal. I inhaled some Chipotle, downed some Dr. Pepper and instantly felt dizzy. For about 20 minutes I thought my race was over. Of course, Big E managed to capture the moment on film: 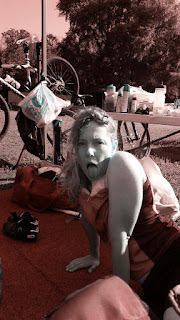 Thankfully, putting my legs up and chugging some water brought me back to life and I somehow got back on the bike. Of course, by then, Rebecca had gained a lap and was still riding strong.

The next three laps are a blur. I held on and pedaled. Pam flew by like we were racing just two laps. I drank water, and then more water, praying to hold off another meltdown. Finally, on lap 17, with less than an hour left, I could hear Rebecca ahead of me in section four. We'd both reached an exhausted state, pushing our bikes up the steepest hills. We rode the rest of the lap together, rolling across the line agreeing to call it quits with a four lap difference between us. If she'd chosen to ride another, I would've, but I'll admit, I probably would've hated someone if I'd had to. In the end, I hated section four, but still couldn't hate Richie.

Thanks to the Dirt Wirx crew and Dave Slovik for an awesome race and to Rebecca Sauber for pushing me harder than ever. Now I have to figure out how to recover for Lumberjack 100 on Saturday. This could involve ice cream.....
Posted by Lisa T at 8:52 PM No comments: