There are perks to working in a bike shop. One of them is easy access to nice gear. Today we had some excitement over new bib tights. They needed an immediate test ride. 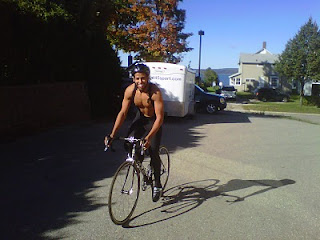 Really, we do actually work a little sometimes, when we're not playing on bikes. In fact, the opportunity to snap this photo rescued me from one of my daily obsessive-compulsive cleaning binges brought on by working with 8 guys who I often call "dirty pigs." They're lucky they're fun.....
Posted by Lisa T at 6:10 PM 1 comment: 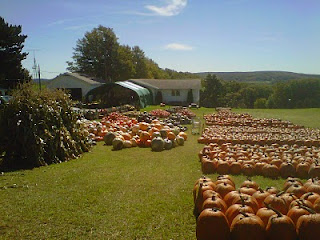 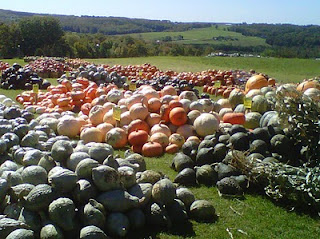 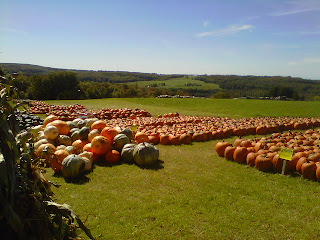 In case you haven't noticed, I've moved, and I love it here in northern Michigan. There are, however, days when I feel like I've moved to a new country. Things are a little different here than in a southern California city. Some lessons I've learned:

1- Men open the door for you in Michigan so you need to stop and wait or you look really rude.

2- Men will also carry heavy things for you in Michigan. Even if you are working and they're your customer. (I'm getting really good at pretending things are heavy......)

3- It's not a good idea to bend over in front of the bike shop (on one of the main streets) to pump tires if you're wearing a skirt. (Think cat calls and honking....)

4- It's almost equally as bad to climb a ladder out front to fix the sign while wearing the skirt.

5- If someone waves or honks while you're running, wave back. You'll probably see that person at the grocery store or gym later.

6- Remember names. People will remember yours and use it.

7- Show up on time. Really- on time, not on CA, ten minutes late time. Every one else will be early.

When you bike commute to work, there's only one way to take the mail to the post office: 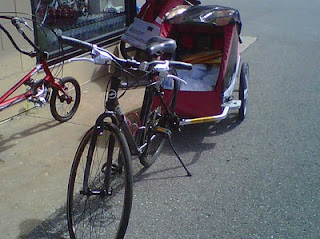 Trust me, I never thought I'd pull a kid carrier behind a bike, but it was fun, especially without a screaming kid. Next time maybe I'll ride the tricycle....
Posted by Lisa T at 4:55 AM No comments:

I know most of you think I'm crazy for moving to Northern Michigan right before winter so I'm feeling the need to tell you why I love this place. Here's just a few reasons I can come up with and I've been here only a few weeks:

1- I run into people I know in the coffee shop. They introduce me to other people and we sit and chat instead of rushing off.

2- People I meet in the coffee shop invite me out with groups of friends so I can meet more people.

3- People I know actually stop me on the street when I'm driving and roll down the window to talk. Really- already happened.

4- The bartender sneaks me out the back door if there's a creepy guy waiting out front.

5- When the van door breaks and I spend a day or two with it tied shut, one of the guys at work offers to try to fix it, even though he's already spent all day fixing bikes.

6- There's a great big adult-size tricycle at the shop. I get to ride it out front in the morning. (I spied a few unicycles in the back too but I haven't braved those yet. The trike is more my speed.)

7- My boss pays me extra if I get to work in any sort of non-motorized fashion. This gives him points towards the best boss ever. Even if there are fruit flies around his desk.
Posted by Lisa T at 6:58 PM 1 comment:

On Tuesday I'll be starting a new job with the boys at Latitude 45.  I'd say the fun is over, but since the job description clearly stated that I must ride my bike consistently, I'm thinking it might just be a new kind of fun, especially since I pretty much ended up with the job because I tried to fix my own bike in their parking lot and screwed it up.

Last Friday morning I rolled into Petoskey and decided to go for a ride. I pulled the bike out of the van, got ready to go, and discovered my rear tire was so worn there was metal showing. Since I was already dressed to ride, I rode over to the shop and asked the mechanic to fix it. He was busy so I did one more ride on the tire, hopped in the van and drove over to the shop. By then I realized it was pretty lazy of me to have a mechanic fix something I'm capable of doing myself so I bought a tire and confidently informed the guys who worked there I could do it myself in the parking lot.

10 minutes later I actually had the new tire on and pumped. While I was struggling to put the wheel on the bike, Joe came out of the shop, seeming sort of impressed I'd done that so fast. Unfortunately, 2 minutes later after he helped me put the wheel onto the bike, we discovered why it didn't want to fit. I'd put a 700 x 25 tire on a tiny triathlon bike that barely fits a 700 x 23. So- I took tire number one off, bought another tire and put that one on myself. While all this was going on, I heard from Joe that they were hiring so when I was finished, I attempted to wipe the dirt, grease and sweat off with a few baby wipes and went in to meet Christian, the owner. Miraculously, he told me to go ahead and apply.

A few days later, I had an interview in shorts, a t-shirt and tennis shoes.

Really, how can this not end up being just a little bit fun?
Posted by Lisa T at 2:17 PM 1 comment:

After 2 months of changing locations almost everyday, I've been in one spot for weeks. There's hope of a job in a place with amazing riding, endless miles of trail running and a bay for sharkless open water swimming. Until winter of course. Maybe then I'll have to take up ice fishing and snowmobiling. While I wait, there's lots of time to explore by foot and bike- something I can never get enough of...... 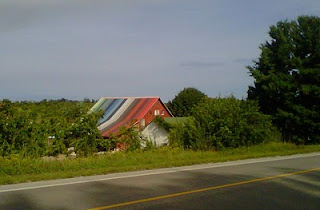