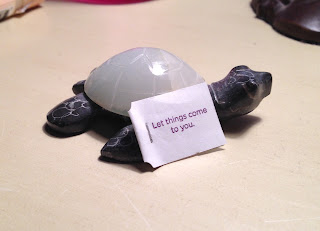 Sometimes in life, there are no words. It's hard to blog at those times. A therapist would probably tell me some crap about how it would be good for me to write about my feelings, but whatever. I prefer crying and the occasional temper tantrum. No one except Big E really needs to witness these moments. (Ok, fine, he doesn't need to either, but someone has to pick me up off the floor and tell me I'm being ridiculous.)

That leaves me left trying to explain the last few months in hindsight, without all the drama.

I was on my way to work one day in February, sitting at a stop light, and I suddenly felt like I was going to pass out, RIGHT THEN. I managed to pull into a gas station, where I proceeded to have a full-on panic attack in my car. I walked across the street to urgent care, where they promptly sent me to the emergency room. A month later, after 4 EKGS, 2 trips to the ER, a primary doc visit, an echocardiogram, a 24 hour chest monitor, a brain MRI, an EEG and every blood test under the sun, the neurologist decided there was nothing wrong with me. I was just anxious, he said.

He seemed unmoved when I said, "Of course I'm anxious. I've been dizzy for a month." He didn't want to discuss my family history, examine the crushed bike helmet I'd brought with me or otherwise consider anything other than the preconceived notion he'd formed before he probably even met me. The only solution he offered was medication, which I took against my better judgment (and the advice of Big E).

Four days later, we were back at the doctor, where I proceeded to have a hysterical fit in the triage room filled with nurses. Apparently Lexapro makes some people crazy. I'm one of them. Let's just hope that's the lowest anyone will ever see me. I did keep my clothes on, but it was tough. Lexapro also gives some of us hot flashes from hell.  Menopause will be a piece of cake after that. Getting me to ever take a prescription medication again in my life, however, will not. I pity the doctor who tries.

Thankfully, since I was pretty much ready to commit myself to a psych ward, a client had suggested an eye doctor who specializes in post-concussion syndrome. After looking at my helmet from this adventure and the results of two hours of testing in his office, he assured me I wasn't crazy. (Ya, ya, I hear all of you laughing about how he obviously doesn't know me that well.) Apparently, it is possible to ride your bike head first into a tree, run 58 miles the next day, function normally for two years, and then finally have your brain give up. Mine was no longer communicating all that well with my eyes, which yes, was making me anxious, but was a problem on its own. One that could be fixed without drugs.

Six weeks of vision therapy later, I'm finally working, running, biking, driving. Granted, the latter still causes anxiety like I've never known, but I'll get over it. There's this little thing called deep breathing that works wonders. (So does sour candy, but Big E is worried I'm going to end up with meth head teeth so I've been trying to cut back.)

I'll admit when I first started the vision therapy, I'd come home grumpy every time. Big E would say, "How was it?" and for once I wouldn't respond with, "Good." He would normally be happy about this because it would be the understatement of all understatements to say I overuse the word "good". Unfortunately it was replaced with, "I hate it."

Of course, although the five year old in me hated it, the adult side finally realized what a good thing it is, not just for my eyes. Vision therapy is all about not trying. The opposite of how I've always lived. (You try growing up the smallest kid on the block without becoming an overachiever.) As the eye doc put it one day when he witnessed my struggle with an exercise in which my eyes wouldn't relax, "You need to find your quan."

We had a laugh over the movie reference, but it also made me think. What was missing for me? How is that I can run two businesses, work part time on the side, run ultramarathons, ride a mountain bike for 24 hours, run for office, but I can't relax my eyes?

That's just it- the relax part. The letting go. I've always loved the idea of putting in the work. For most things in my life, I've succeeded by doing just that. Working. The concept of not trying was pretty much foreign to me until now. What was missing was being able to let things come to me.

Of course, in true "putting in the work" fashion, I've embarked upon fully embracing this concept and am using it to train for my first hundred mile run. (I know, I know....) What can I say? It's a start...