It all started with a book, really.  I recently read The Art of Fear  by Kristen Ulmer. The gist of the whole book is basically that you can't fight or ignore fear. It might work for awhile, but it will still be there, screaming at you from deep inside until you finally face it, examine it and learn from it. Of course, doing this sounds easy, but it involves really taking a deep look at what you're truly afraid of and what measures you go to to avoid or silence those fears.

Again, that might sound easy. Being attacked by a shark. Or by a bear. Or a human. Getting into a life altering accident. Having another head injury. Racing in front of a crowd. Sure, these are all things I fear, but for me, none of those things stops me from anything. I still swim. I still play in the woods. I still run by myself. I still ride a bike. I even raced one in front of a crowd last month.

For other people, that might not be the case so maybe these fears would be things to examine further, but for me, they just aren't the fears holding me back. So, I had to wonder, what fears are holding me back? What really changes my life? What will I go out of my way to avoid so I don't have to feel fear?

I'll admit, I've been thinking about this for a couple of weeks and hadn't come up with anything. Not that I'm saying I wasn't afraid of anything.  Hell, I feel scared for a good chunk of every day. But why? Because we all know I'm not walking around all day worrying about sharks. So what is it?

Well, this morning, it all came in a flash. I was riding my bike on the trainer and needed some distraction so I watched this video.  I swear I made it about two minutes before I started crying. If you don't feel like watching it, I'll just sum it up. She's talking about hesitation, about how it keeps you from doing things, how it holds you back. As soon as she used that word "hesitation" I knew what it is I'm so afraid of. That one thing that will always make me hesitate. That makes me not do or say something I really want to.

I'm terrified of being judged.

It paralyzes me. I sometimes lie awake at night reliving a moment over and over in my head from my day. A moment when I'm sure someone judged me- thought I was stupid or annoying or, God forbid, not perfect. If I don't feel completely ready for a race, I don't sign up for fear of being judged by the result. If I feel judged by someone more than a few times, I'll avoid them completely. When I felt judged on Facebook, I deleted my account. The big kicker though was realizing this-  I worry about nearly everything I say after I say it to the point where I often just say nothing.

This fear of being judged, this hesitation it's caused, it's stolen my voice. I used to write more often. I used to speak to strangers. I used to love to tell stories. Now I mostly just talk to myself. (I don't think I do this out loud. At least not yet.)

Of course, now the hard part comes. How do I change this?  I know it's not an overnight process. It will be long and hard and there will probably be a lot of tears. But then, nothing good in life really comes without a lot of hard work.

Since I'd just finished a video about hesitation, I figured I'd better start right away before I changed my mind about facing this fear head on. So, as soon as I got off the trainer I headed to martial arts and forced myself to talk to someone whose judgment I fear the most. You know what- it wasn't that bad. I'm pretty sure I won't lie awake tonight worrying about anything I said. I might lie there worrying about the many moves I didn't understand in Jiu Jitsu, but hey, one step at time.

Uphill into the Wind

Some races are harder to write about than others. Sometimes the story comes easily, usually because I actually wrote most of it in my head while I was racing. Other times, like with Polar Roll in February, the race is more of a struggle and the story then seems to be too. Not that I have anyone to blame for those struggles but myself. Racing a fat bike, especially for 40 miles, requires actually riding outside frequently for training and I'll readily admit I just didn't do enough of that before the race.

Now, that's not to say that we didn't have a blast on our trip. Big E and I rented our cozy apartment (the same one we rented for Marji Gesick) again and went up a few days early to play on bikes in the snow. Apparently to Big E, this means taking funny pictures of me when I crash in the snow. 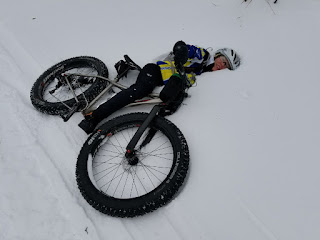 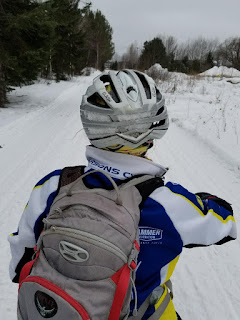 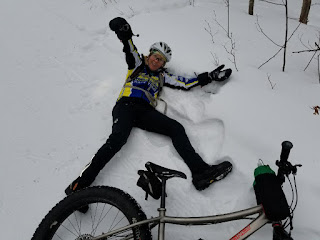 In case you were wondering, no, he doesn't ever actually put down his camera and help me up. He says this is because if I crash and he's not around I need to be able to figure out how to get out of the deep snow on my own, which proved to be true in the race. And, yes, I just admitted he was right (just this once) here in public.

That said, I'm not sure what his reasoning was for taking my picture every time I walked up a hill. 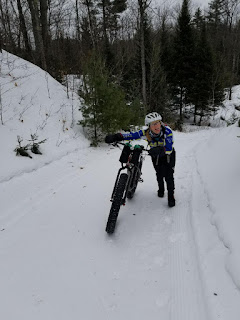 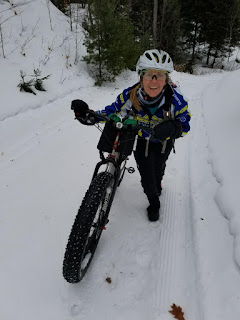 It took numerous tries to get one of me smiling. Oh, and if you look closely, you'll see my footprints are not the only ones there. Seems like maybe the photographer also walked his bike up this hill?????

When Ted arrived on Friday and joined us for a ride, I thought I might get some reprieve from all this picture taking, but low and behold, when I looked up the first time I pushed my bike up a hill, there he was taking my picture too.

They're lucky I was wearing mittens or someone would've gotten the bird at that point.

Considering how much bike pushing happened on our rides, it should come as no surprise that my race on Saturday was a little slow. It went something like this:

We headed out from Ishpeming early to head down to Marquette for the start. Big E forgot something in the apartment so he left me in the truck to run back in. I put my headphones in to listen to some pre-race pump up music, which led me to start up my pre-race list from Marji. I'm not really sure exactly what happened but by the time he returned I was crying.

Thankfully, Big E has learned by now to just let it be when I'm like this. Talking will not help. The flood of emotions has started and it's better just to let it flow. In this case, even if he had tried to get me to talk, I could never have explained the complex flood of emotions I was feeling. After all, the last time I raced on these trails, I was out there for nearly 32 hours and then ended up in an ambulance. Considering what my body went through, those 32 hours were like a mini-lifetime. Which means these trails hold a million memories, each of which hold their own emotions. Every one of which seemed to overcome me all in one moment. Add to that the fact that I'm completely terrified of big mass starts on the bike, and I was pretty much an emotional wreck.  (Later, on the way home,
Big E bought me this to commemorate the moment.) 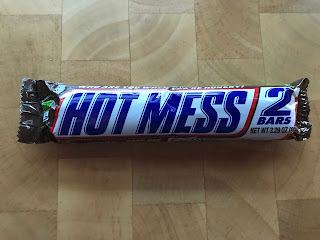 Given the emotional start, the race was actually quite fun (except for the 12 miles of snowmobile trail). Somehow I pulled myself together before the start, mostly because I had to pee and finding a bathroom took my mind off my meltdown. And, as usual, once I was moving and realized I didn't die during the madness of the start, I started loving the day (except for the snowmobile trail). The first 12-13 miles went by pretty quickly, mostly because, as usual in Marquette County, we were either chugging our way uphill or zipping downhill hoping not to crash.

Then we hit the snowmobile trail. Let's just say this- uphill, in to the wind, by myself. For 12 miles. My left arm was so sore from overgripping my handlebars those first 13 miles that I was convinced I was having a heart attack for about 5 miles and was going to die here all alone on a snowmobile trail. Then I realized I was being dramatic and pedaled harder to get it over with.

Plus, the real fun of this race starts after the snowmobile trail. In true Todd and Danny fashion, they make you earn it. You suffer, but there's fun. There's some flow. There's an aid station of fun Canadians with whiskey and beer. Then another aid station with bacon and hugs, where they really just want to give you more whiskey and beer. The guy in camo will give you a hug if you ask though.

Then, there's the finish, with more hugs from friends and lots of time sharing race stories with friends. With whiskey and beer, of course. Kinda makes that 12 miles of uphill, into the wind on the snowmobile trail worth it.