Since we celebrated Christmas in Costa Rica this year, we had to get creative on the gifts. Truth be told, I'd planned to give Big E all his gifts when we got home, but then I panicked on Christmas Eve and really wanted him to have something to open on the big day. I rummaged through my stuff to find something to wrap, came up with a Lake Superior magazine, put a note promising a fat-biking trip on the cover and WA-LA, instant last minute gift. Of course once we were home, we actually had to find a weekend we could both get away. Lucky for me it was Valentine's Day weekend so I somehow also managed to turn his Christmas present into a Valentine's Day present too. (Too bad his birthday is in June....)

With a little planning, I managed to find us a little cabin in the woods outside Marquette to add to the romanticness of the weekend. (Big E is pretending to gag right now.) We arrived to our romantic hideaway after a blizzard blew through on Thursday. Perfect timing for some fresh snow! 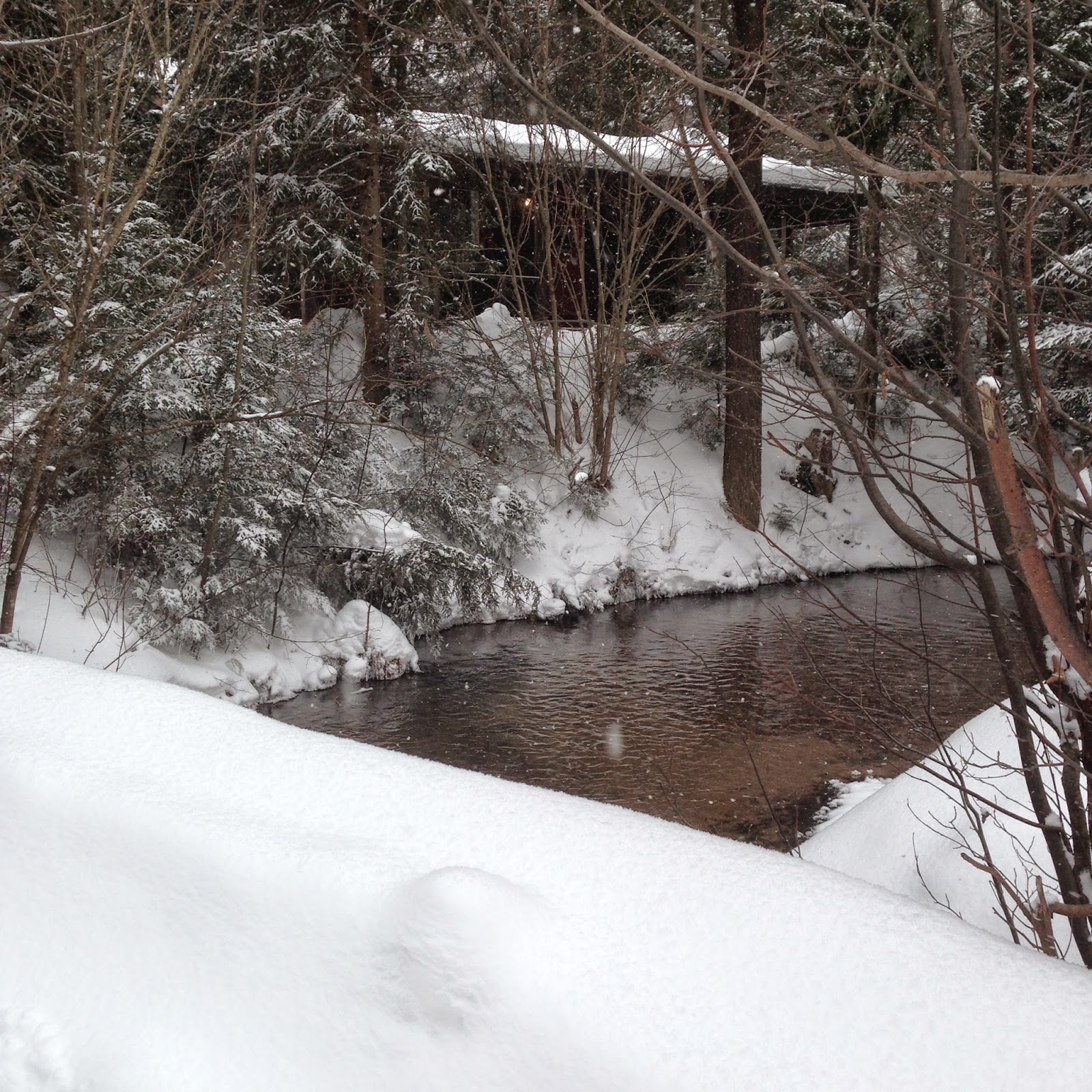 I gave it the thumbs up after I discovered I could ride my bike right off the front porch. 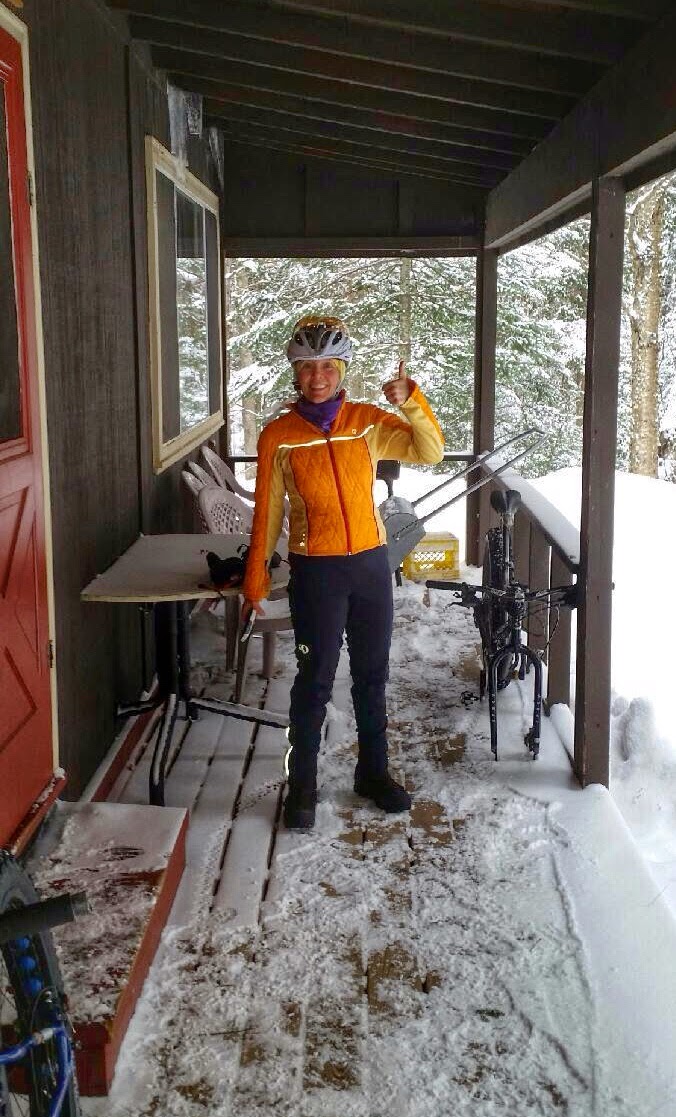 Friday proved to be a perfect day for riding. The ducks apparently thought it was a great day for swimming too. 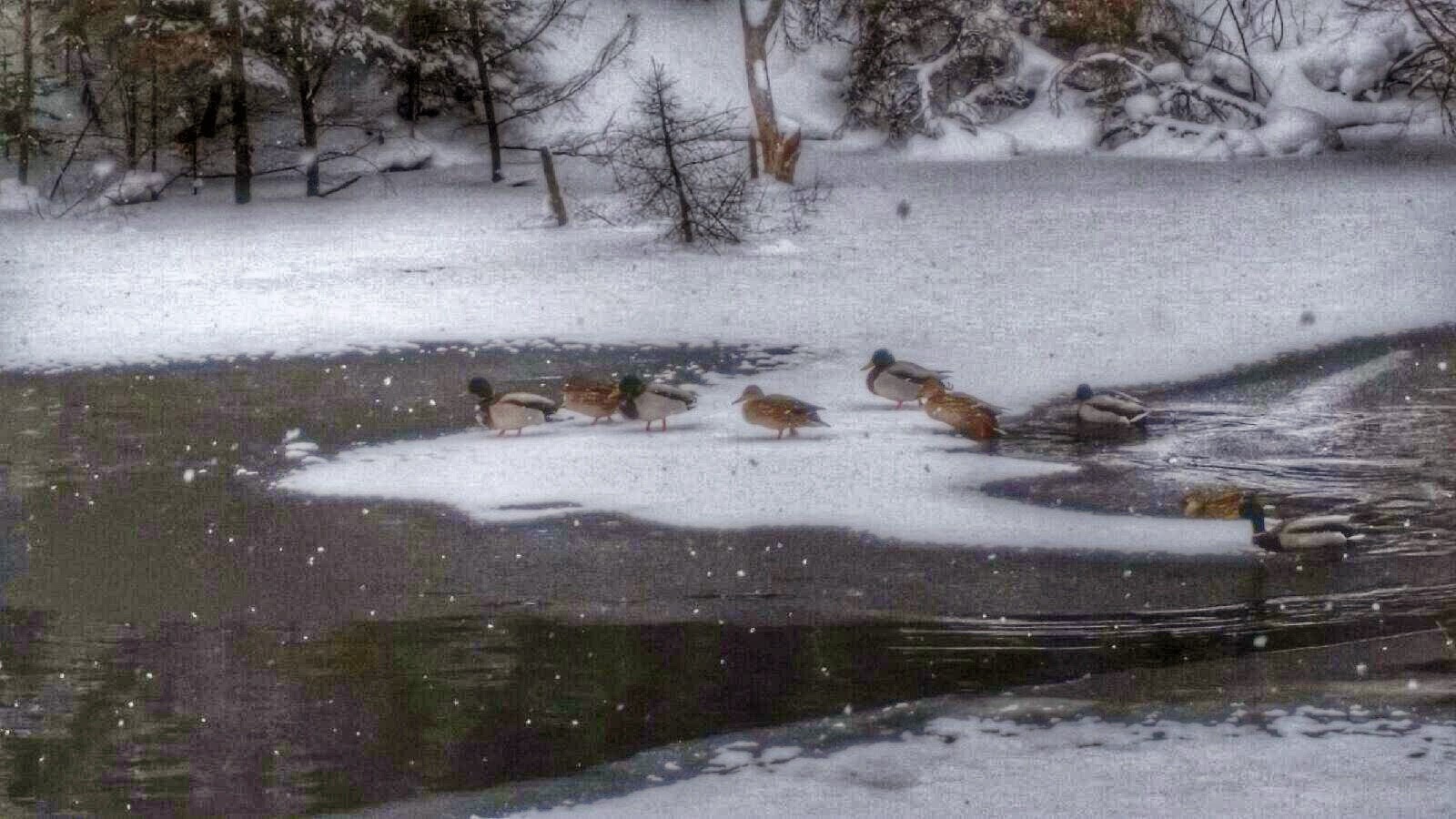 Of course we had some beautiful snowshoe groomed trails to ride, but that didn't stop us from exploring a bit off the beaten path. 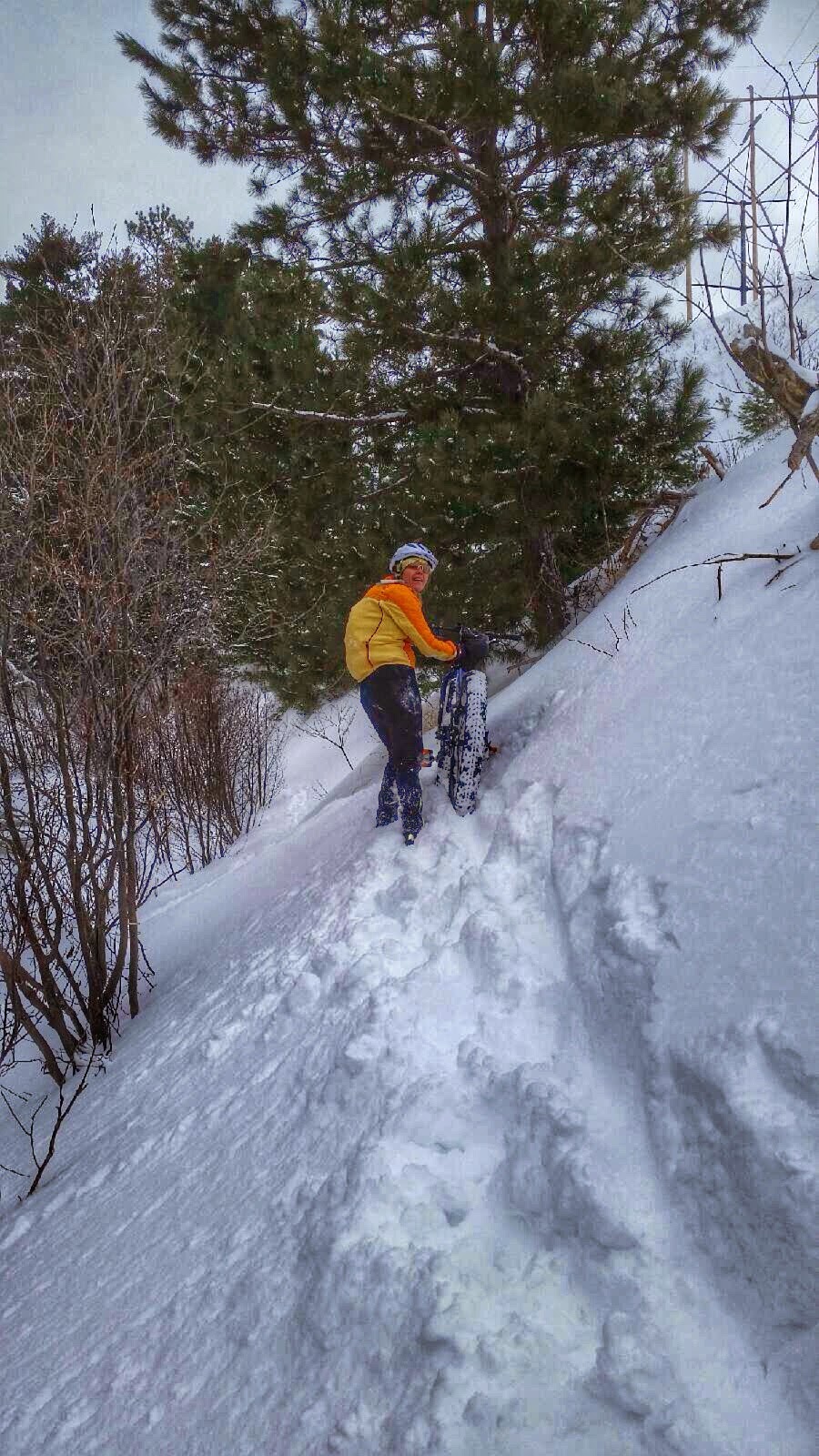 We ended the day cheering on some sled dogs before the next blizzard rolled in. 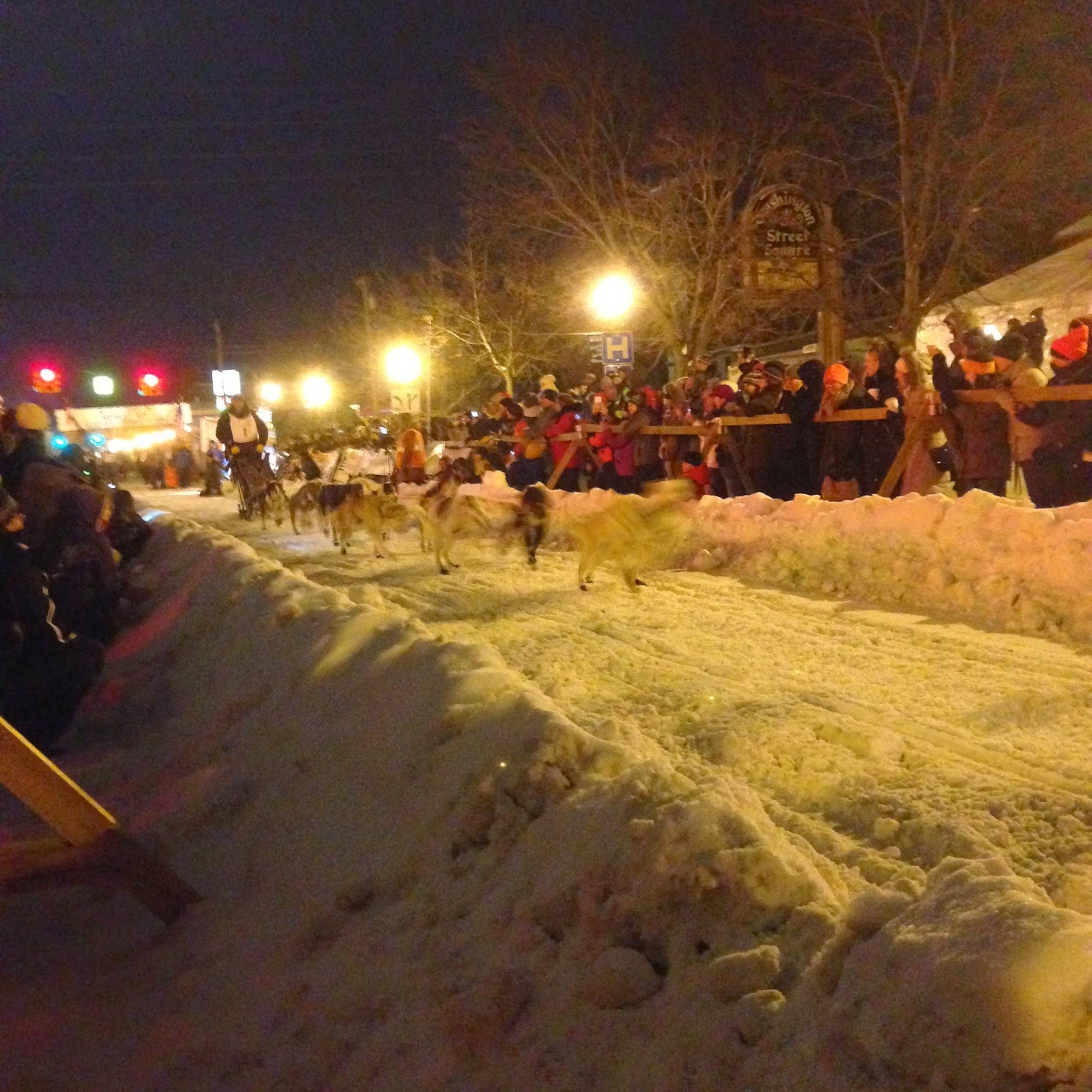 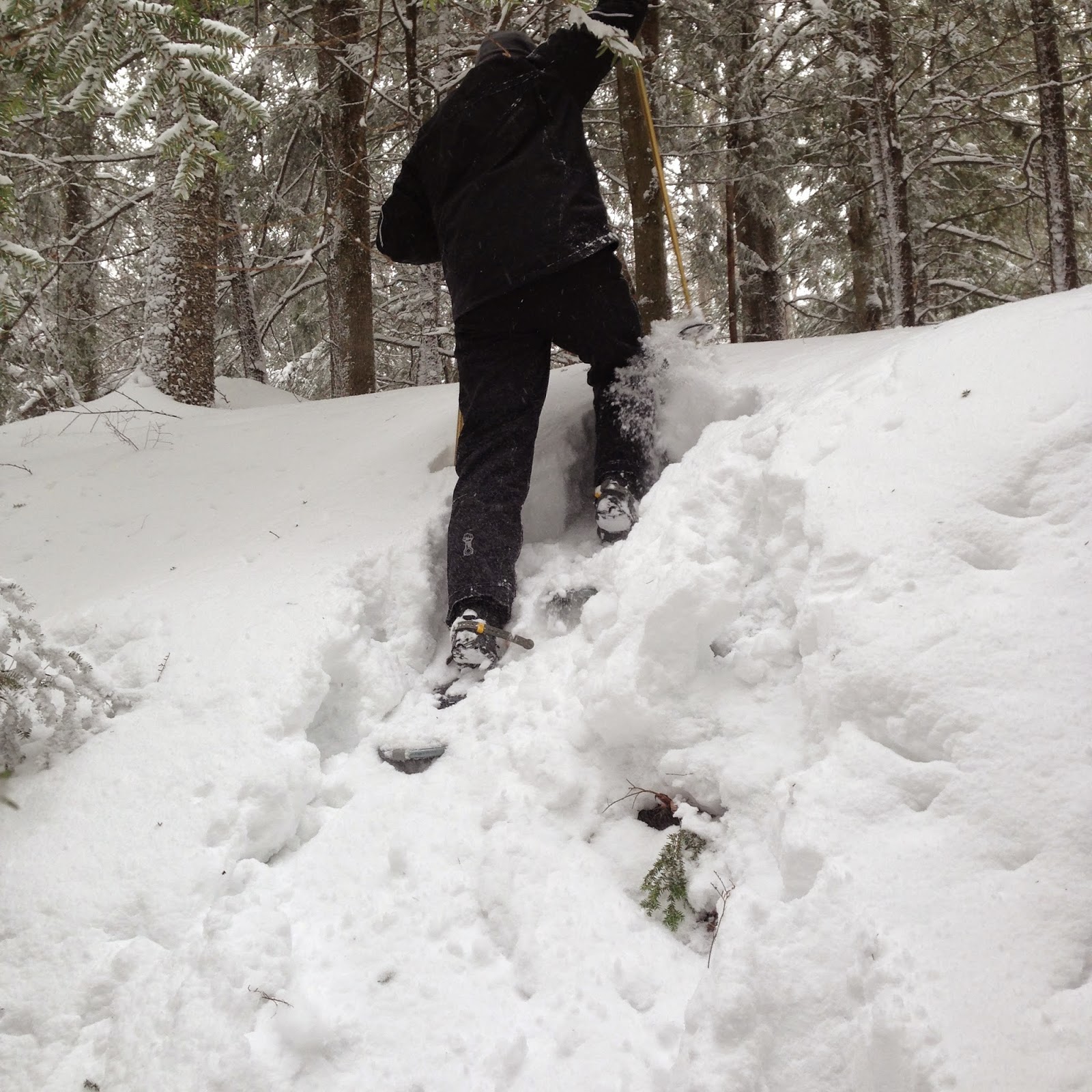 Of course, it would also not be a proper Big E adventure without a log crossing. 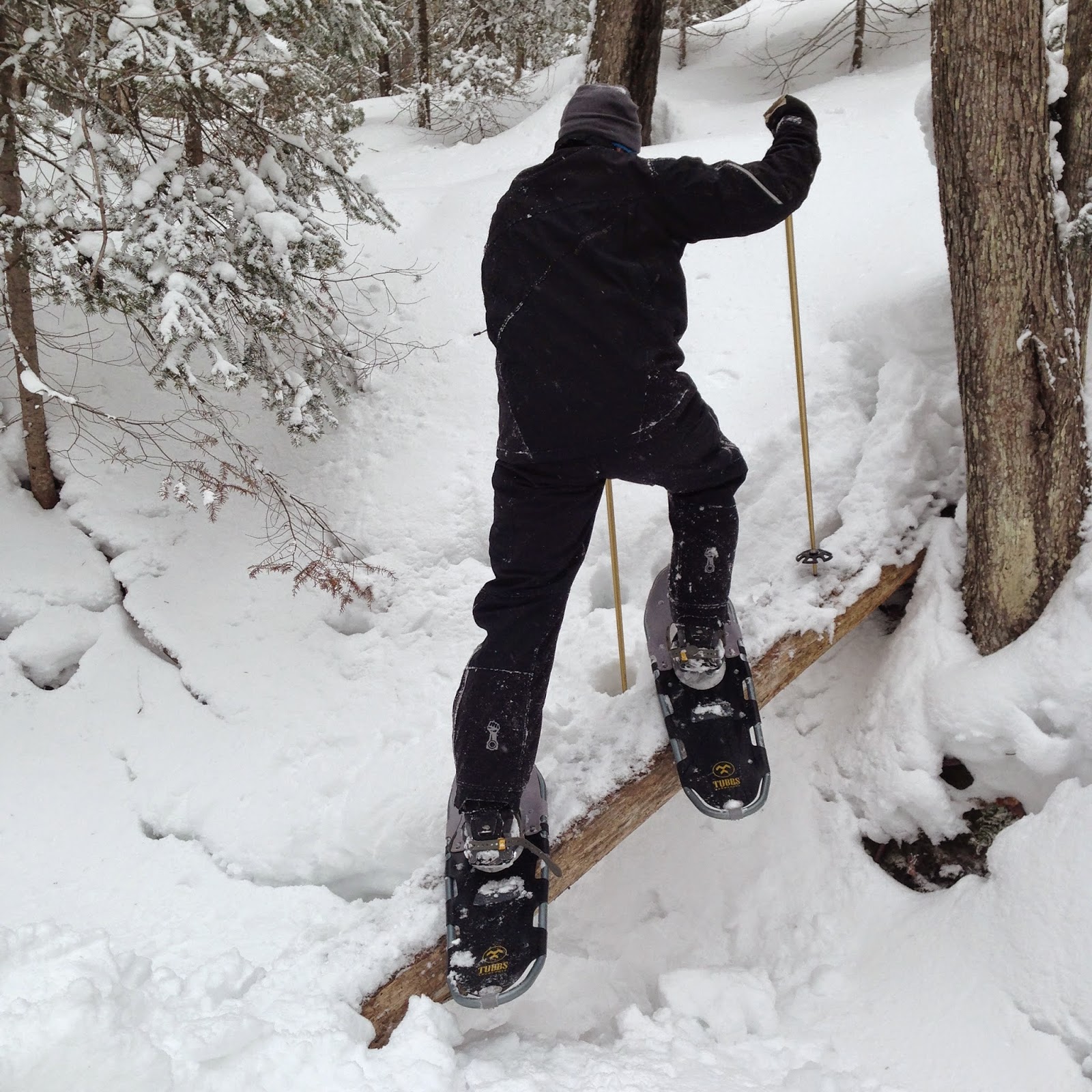 All of this adventuring of course made me very hungry for a picnic. 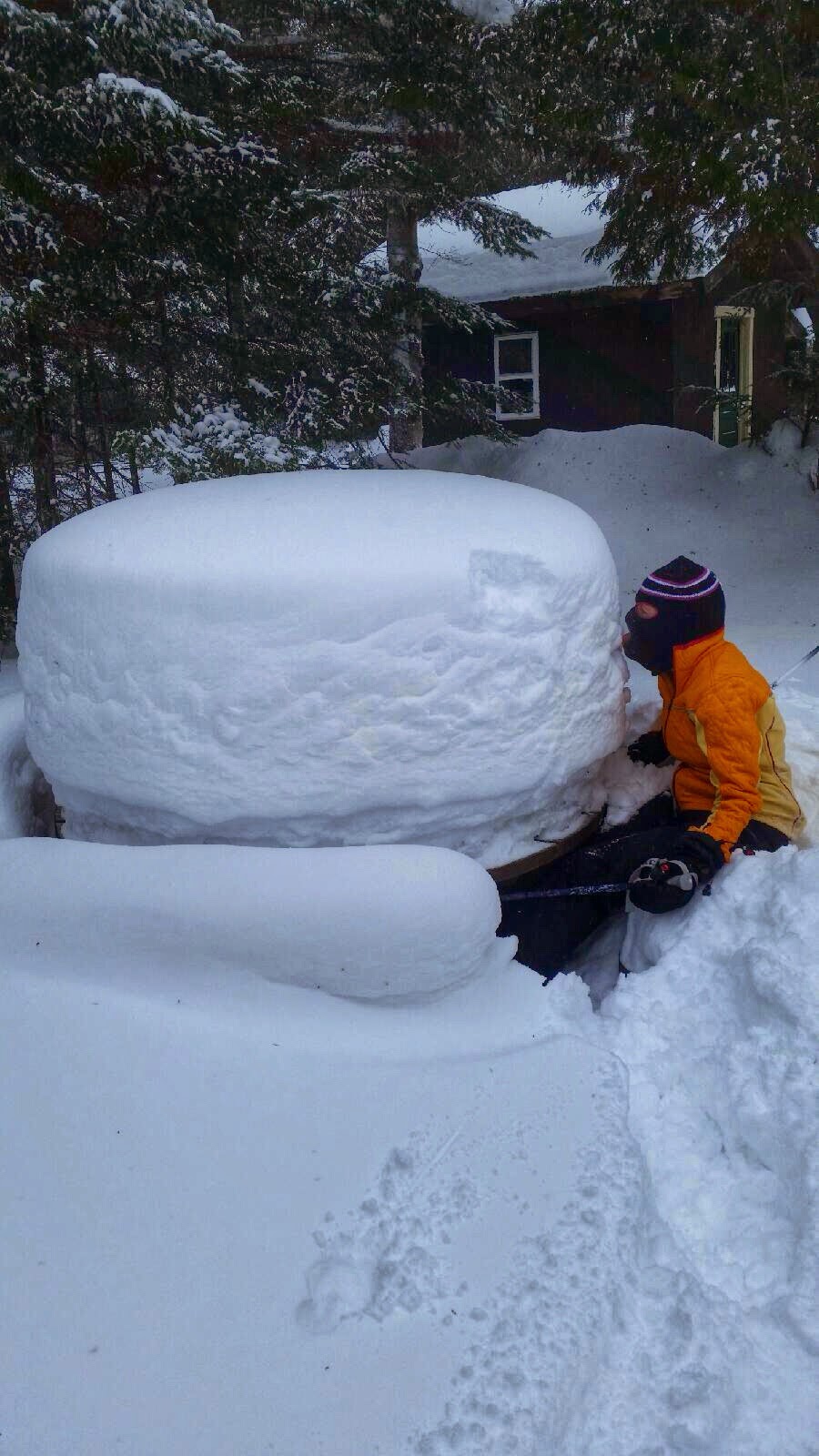 We did venture into town to test out the trails later in the day, but it turns out 40 mph winds and fresh snow make for a lot of push-a-bike. 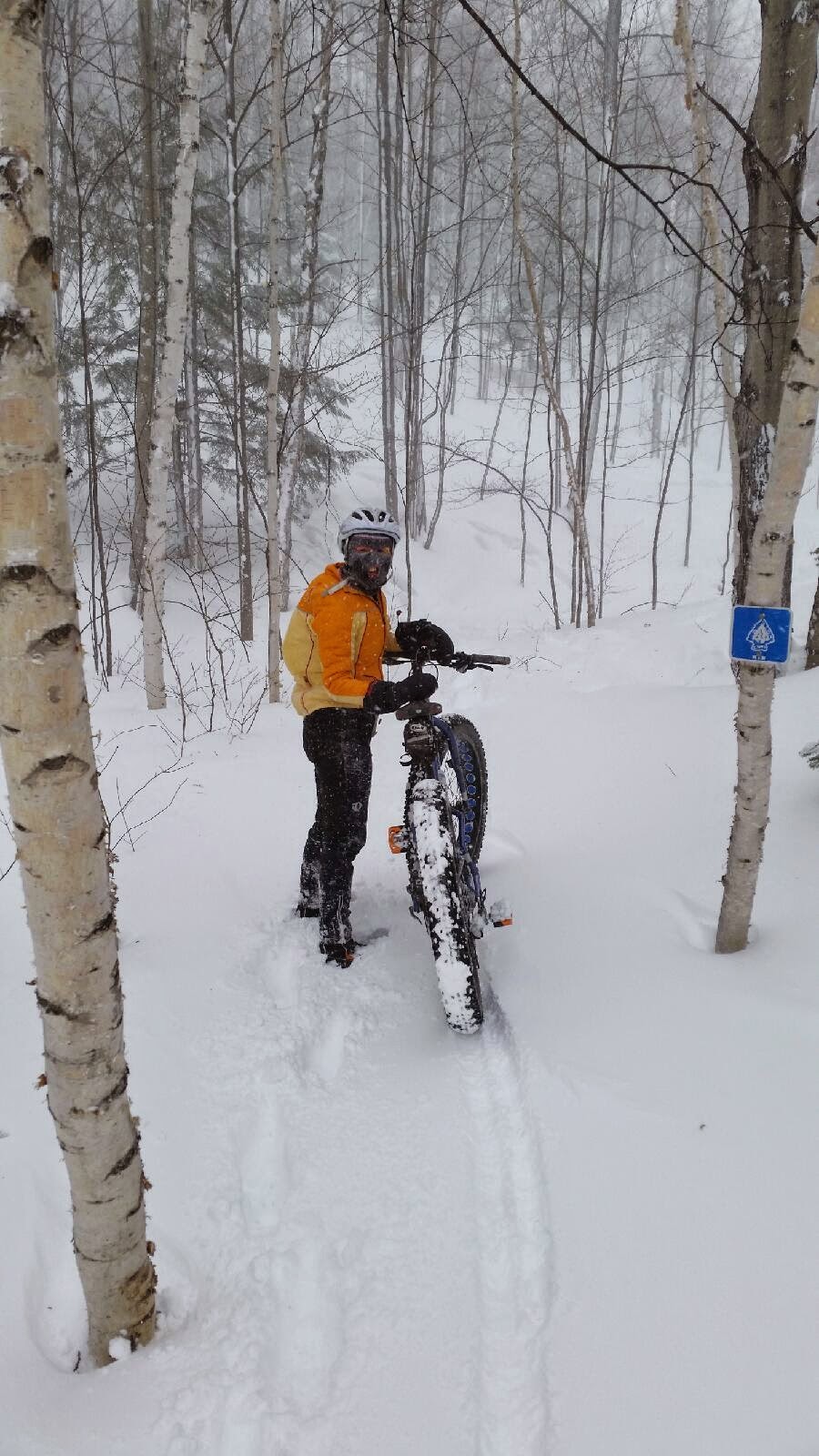 (I swear I did actually RIDE that bike at some point.)

In an effort to get at least some pedaling in, I convinced Big E to ride on the roads near our cabin, because biking out in the open in 40 mph winds is always fun, right?! 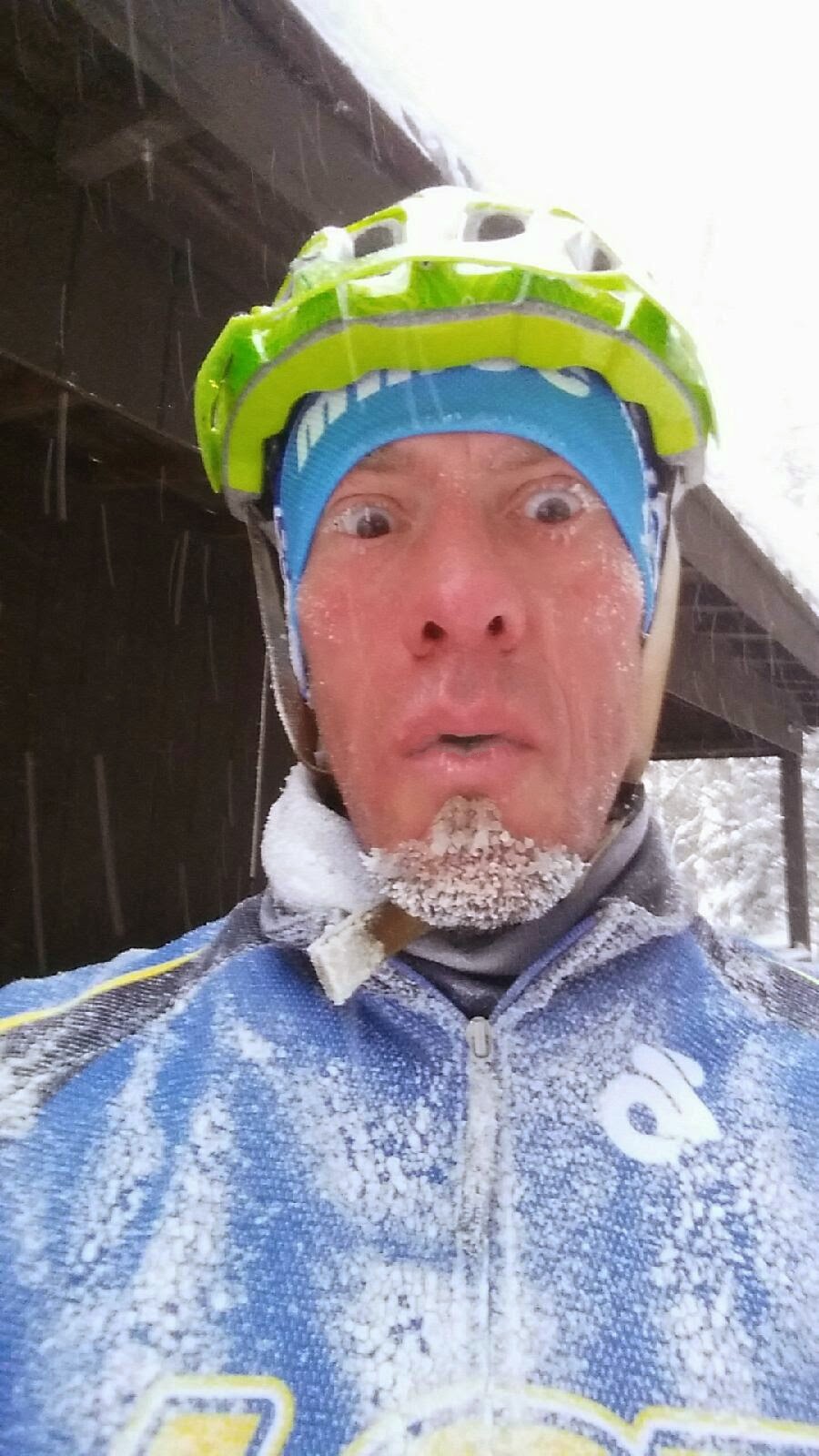 Good thing we had a nice, romantic cabin with a fireplace to warm up in!

Thankfully the trail-grooming fairies were out Sunday morning so we actually got to pedal a bit before heading home. 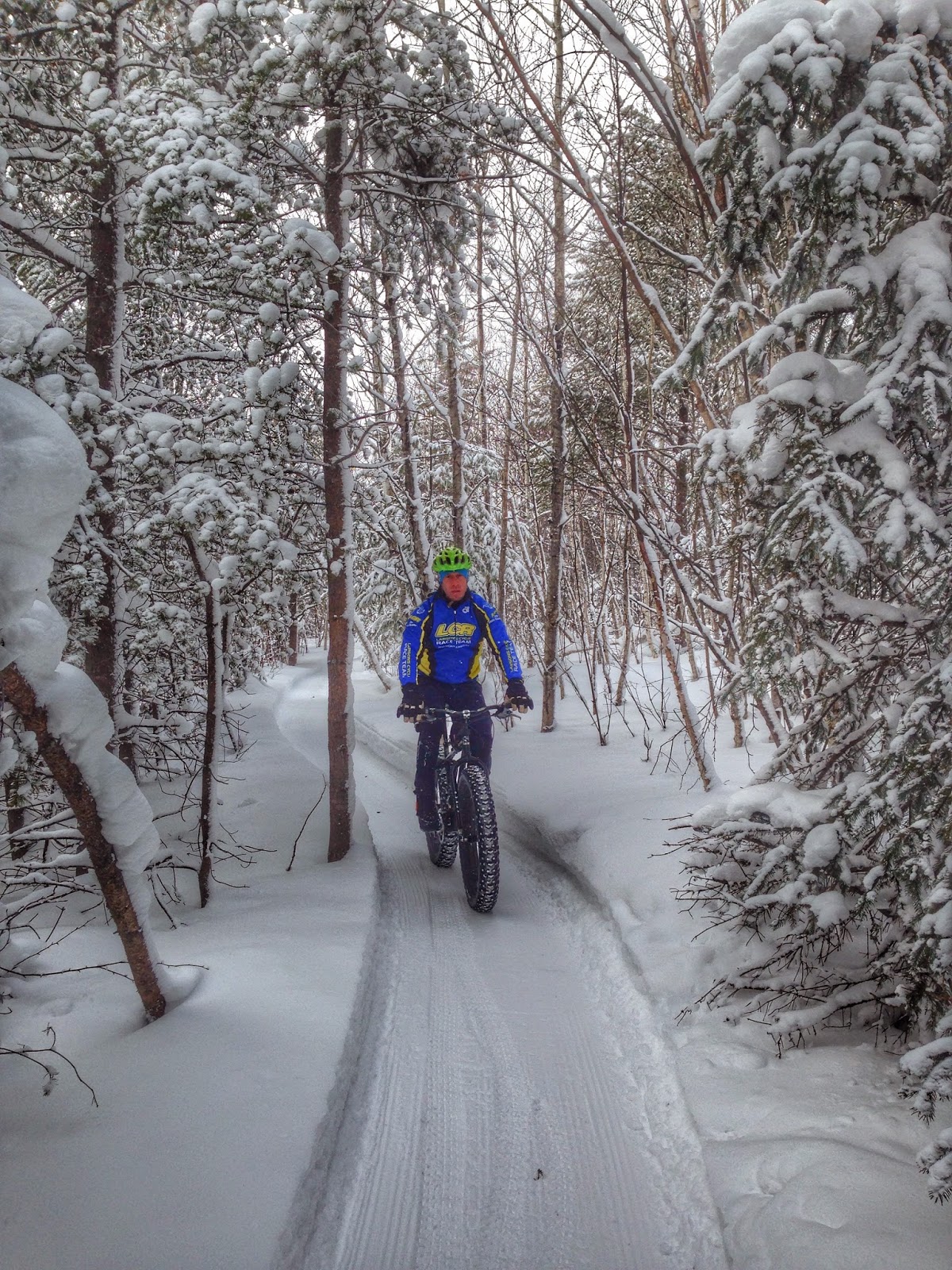 Of course, we had to make a couple of detours on the way back so Big E could share some of his past adventures.... 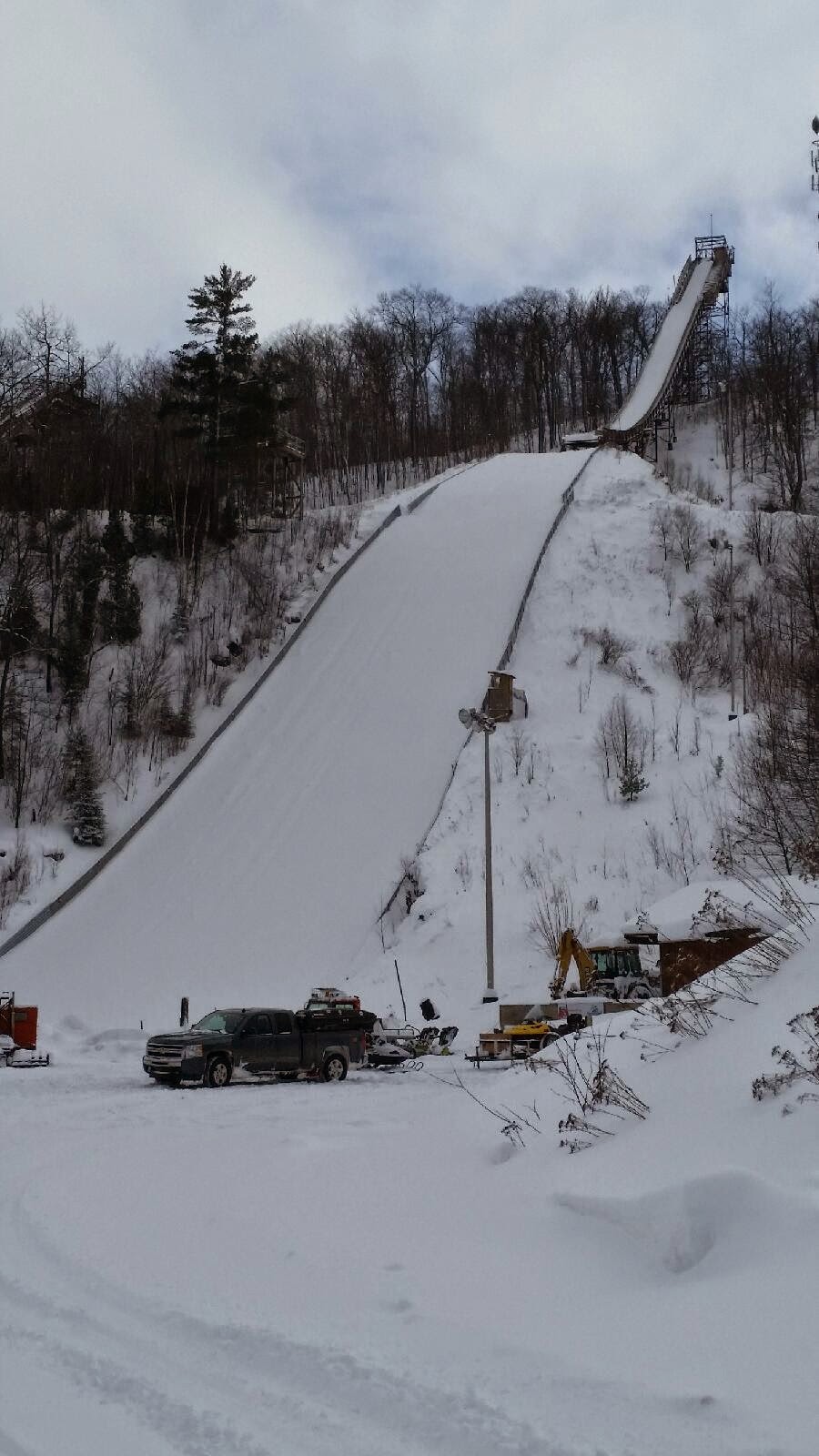 Hope you all had a happy Valentine's Day! 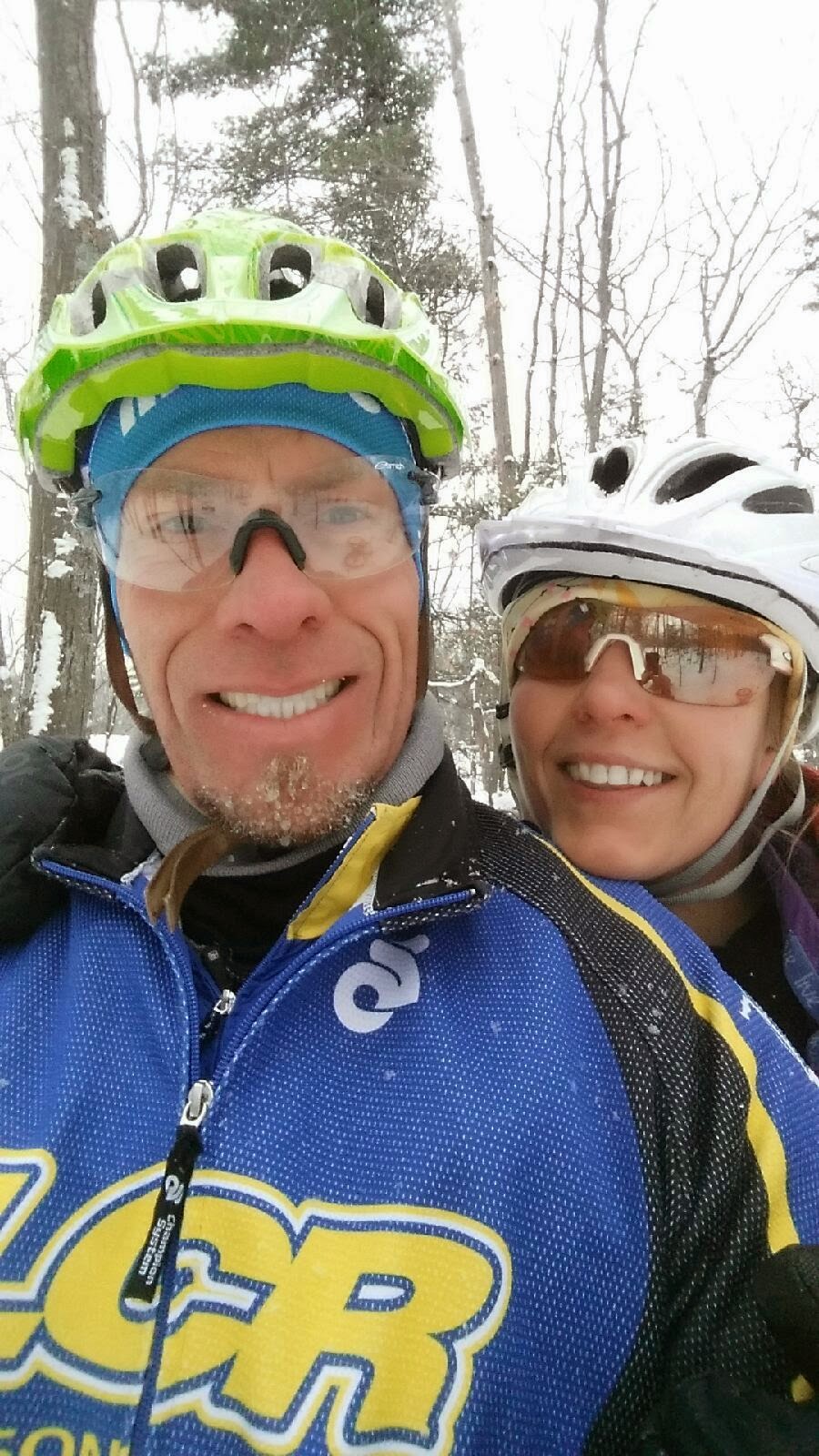