Every Obstacle is an Opportunity

I haven't run in almost two weeks. That's almost as long as I went without running after Marji Gesick. I don't really plan to run tomorrow either. I might. Or I might not. That's sort of freeing. I still love running, but it took trying something new to realize why.

Really what I love about running, or biking or anything active is breaking through a limit. Pushing the edge of the comfort zone. Going right to that edge of "I can't do this" and doing it.

Here's how I explained it to Eddie the other day:

That was two days ago. I was so shattered from the workout I actually had a good private cry later in the day. Doing a sport where someone else is setting the pace, where someone else is holding you down, where someone else is fighting every move you make is completely foreign to me.  Sometimes I hate it. Which is exactly why I made myself go back the next day. Because I can live my whole life doing what's easy and never learning or I can get my butt into the gym, face my fears and come out of it changed.

Of course, just to push my limits further, when I walked into class last night, there wasn't a single person even close to my size in the place. As coach put it today, "There wasn't a white belt in the room under 180 and then she walked in."  As we warmed up, they were actually having a conversation about what position they used to play in football.

At this point my brain said, "I'm gonna die." Thankfully my heart said, "Give it a try, you're probably not gonna die in class. Probably."

So I tried. And it was awesome. Of course they took a little mercy on me, seeing as how they could all probably squash me with their palm. But by the end, after some patient teaching, I was actually rolling with one of them and started to feel just a teeny tiny bit......

I know it probably won't last and next week someone will toss me onto my back or choke me and I'll be back to being ridiculously uncomfortable. But as coach explained today while teaching me a new move, in Jiu Jitsu sometimes what looks like an obstacle is really an opportunity. It's all in how you react to it.

So here's to using uncomfortable to your advantage. To turning struggle into growth. To embracing humility. To refusing to let fear paralyze you. To accepting bumps and bruises as proud proof that you never settled for "easy". To letting other people crush your comfort zone. To using every obstacle to your advantage.

Tapping Out is Learning 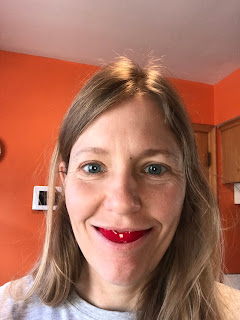 It only took about a week to realize I should get a mouth guard for martial arts classes. First I got clocked in the jaw while holding the pads for a guy. His kick was a little more than powerful than I imagined.  He said I didn't even flinch when I face got hit though. Well, at least now we know I keep my eyes open while getting pummeled. Later, I discovered I'd chewed up the inside of my mouth while getting tossed around in Jiu Jitsu. Then I realized I have a little trouble keeping my tongue in my mouth when I'm exerting myself. So, yeah, a mouth guard seemed like a good idea. I'd like to keep my tongue attached as long as possible.

Needless to say I was pretty happy to have one the last time I went to Jiu Jitsu. I lost track of how many times I tapped out, which I'm pretty sure was the point since every time my favorite rolling partner tapped me out I'd hear coach yell at him to do it again. Apparently I needed to learn to tap out BEFORE something actually hurts.

This is a really difficult concept for an ultrarunner to grasp.

Seriously it took me days to mull this over. In my head, tapping out and quitting were the same and I fu*!ing hate quitting.  Especially multiple times in 10 minutes.

I was still wrapping my head around this whole concept a few days later when I started chatting with one of the guys while flopped on the floor exhausted after Muay Thai class. This is sort of how class always goes for me. I think I can't do whatever it is the coach is asking me to do. Somehow I find a way to do it.  Forty five minutes later I collapse on the floor with my muscles literally shaking to rest for 15 minutes before the next class starts. Thankfully this is usually what everyone else is doing too so we chat. So, during this chat with my new friend whose name I was either too tired to ask or was too delirious to remember, my frustration with tapping out came up. Wise new friend of course had a pretty simple solution to my struggle. He said something like this,

"Stop thinking of it as quitting. Tapping out isn't quitting, it's learning. Every time you tap out you learn something. Sometimes you just have to tap out 5 times for the same reason before you figure out what you're learning."

Well ain't that the truth.  I have a feeling I'm so stubborn it might be more like 10 times.

So tomorrow it's time to get right back at it. Tapping out. Learning. Facing a few fears. Keeping my tongue in my mouth. Doing stuff I thought I couldn't. Making new friends and learning their names....