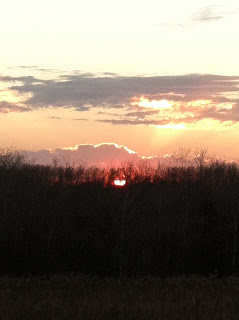 On my run today, an old man hiked past me. He wore jeans and carried ski poles. Around his waist, he sported a harness attached to his dog. He jogged a bit after he passed me, perhaps to bridge a gap in case I wanted to race. He needn't have worried. I savor my trail runs. Racing them would be akin to guzzling an entire bottle of expensive scotch.

As I climbed the rest of the hill, I heard gunshots. Possibly a neighbor securing dinner for a lot of nights to come.... When I reached the top, I turned right and encountered two deer. The one closer to the trail stood frozen, one ear cocked. I moved closer, wondering if someone had placed a statue all the way out here. She refused to move. When I got close, I froze too. As we stared each other down, she twitched only once. After a minute or two I made the sound Big E taught me. Deer make this sound to warn each other, he'd said. I thought she would run, but she came closer. She seemed to sniff and then slowly pranced off with her friend.

I continued on, marveling at the amount of snow that's been made on the ski hill, scaring off some bunnies and listening to the evening sounds. The sun had nearly set, leaving the prairie with a slight glow. A crescent moon, the kind my sister and I always called a fingernail moon, was above my head. The last bit of sun and high moon gave me just enough light to finish the trail.

I turned on my headlamp for the last mile on the road, mostly so the few cars out could see me. There are no street lights out here. Porch lights are rare. As I made my way up and down the last few hills, I noticed the hot and cold pockets in the air. It was as if the warmth of the day and the chill of the night were having a little show down. By the time I ran up the driveway, the night had won.  I lingered a bit outside, taking one last little sip...
Posted by Lisa T at 8:49 PM No comments: 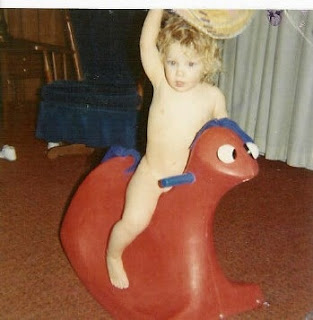 Maybe I should consider truck driving as an alternative to politics? My handle could be Girl Undressed....
Posted by Lisa T at 8:40 AM 1 comment: