To say that this year's Marji Gesick was a mixed bag of emotions would be an understatement. After running the 100 in 90 degree heat last year, I decided to "just" sign up to ride the 50 this year. I wasn't entirely sure my inner thigh chafe would actually be healed enough to run again. Of course, after spending endless hours on the bike training for HAMR earlier this summer, I was really itching to run again, but by then it was too late for 100 mile run training.

So, I showed up to Marquette really wishing I was running instead. Watching the run start on Friday didn't help, especially when I realized someone was surely going to smash my course record to pieces and I wouldn't even be there. To add to my mixed bag, Big E was riding the 100, so 90 minutes before my race, I dropped him off at his start and left wishing I could drive around all day to cheer for him too. Since I was also slightly terrified of driving his barge of a truck to my start, I took off without changing the music, which meant I listened to his pre-race song 5 times instead of my own.

By the time I arrived at Marquette Mountain to start my own race, I really just wanted to drive around all day listening to Metallica, feeding Big E and cheering for runners. Thankfully, the Ringmaster's awesome wife, Stacie, was there doing bag check. She's the pep talk queen, probably because she runs the drop bag station in this race, which means she's likely watched 100's of people pull the plug.  She certainly wasn't going to let me pull mine before I started.

Fueled by her pep talk, I finally listened to my own song (Whole Lotta Rosie in case you were wondering) and channeled my inner racing Rosie. I needed her since the start was straight up the mountain. Not an easy task for we singlespeed junkies.

To my surprise, the uphill wasn't nearly as bad as I imagined. I pushed a bit, but managed to ride much more than I expected. What I didn't expect though, was to realize just as we headed down that I'd made the rookie mistake of leaving way too much air in my tires for the technical downhill. Halfway down, terrified I'd crash and smash my face on the rocks, I finally jumped off the bike, only to actually smash my face with my own handle bars. Rookie move #2.

That's pretty much what I did for the next 10 hours- push the pedals. I'll admit- I stopped to talk to every runner I passed because I really wanted to at least experience their journey for a few minutes, but other than that I channeled my Rosie and kept moving forward, which at the Marji Gesick means riding a whole lotta technical shit I would probably push my bike over any other time. It turns out, when I want to avoid riding in the dark, I'll ride some pretty sketchy downhills. (Not that you can tell by the race pictures. As far as I know, I'm pushing my bike in all of them. I think the Ringmaster paid the photographers to avoid any photos of me riding. I'm smiling in all of them though so that's a plus.)

In the end, after over 10 hours in the saddle, I happened to make it to the top of Jasper Knob just as the last few 100 mile riders who might earn a buckle arrived. I knew better than to get in the way of a man on a mission to earn the coveted Marji buckle, so I jumped out of the way and let them make their sprint while I enjoyed the last mile.

To my surprise, since my teammates were all still out on the 100 course, I heard my name at the finish. Ruth and Amy, friends from Marquette, like always, had taken the time to come out to the finish. This is sort of the spirit of Marji and the UP- even when you think you know no one, there's always someone there to cheer.
After spending the race fighting off those pre-race conflicting emotions, it only took minutes for them to flood back. Big E was still out there and all I wanted, even more than getting warm, was to do some cheering. Amy knew what time he'd passed his first drop bag and after some quick math, I realized he'd be riding by the finish (part of the Marji torture is passing by the finish line with 25 miles to go) any minute. I took off on my bike and asked the first guy I saw if he'd met a loud guy named Eddie on the trail. (Everyone knows Eddie.) He hadn't but he took one look at my jersey and said, "There's a guy behind me wearing that jersey though."

I knew it would be Eddie. Sure enough, I found him minutes later. Somehow we can always find each other in these races. Mostly because he's loud and really friendly. Apparently our cool jerseys help too. After a quick stop to put on his light, he was off again and I was able to take a quick shower before heading to meet him as he came through Jackson Mine Park to his bag drop a second time.

If you've never hung out at Jackson Mine Park during the Marji Gesick, you're missing out. It's one of the most inspiring places I've been in a race. Sure, you see a few shattered souls come in and pull the plug, but mostly what you see is a whole lot of absolutely exhausted, shelled people come in and some how muster the energy to head out in the dark onto one of the hardest sections of the course. Big E was one of those. This spot was a big deal. He'd pulled the plug here two years ago and then last year pulled even earlier after getting almost no sleep while I was out running the night before his race. So this park was kinda hanging in the air as that place he wished he'd kept going for two long years. He rolled in feeling like crap. He sat down and started shivering. I started to worry, but he assured me he'd keep moving. After some Coke. And warm clothes. And ginger ale. I didn't want to push but when he'd been there over 30 minutes I started to panic. Thankfully Stacie did another of her pep talks. She picked a time.  He was leaving by midnight.

Not long after midnight, that's exactly what happened. Somehow, after over an hour in a lawn chair, he got up, threw his leg over the bike and showed that last 15 miles who's boss. Like I said, Jasper Mine Park is pretty inspiring. You see a lot of people slay their demons there.

Later that night, after nearly 24 hours awake, we put Marji to rest. At least for the year. I won't lie. I literally reserved our Air Bnb for next year while we sat in the truck on Monday preparing to drive away. There's a run out there that's haunting me. I might have finished but that doesn't mean I don't want another crack at that damn buckle.  After a year of wearing this shirt to celebrate crossing that line last year 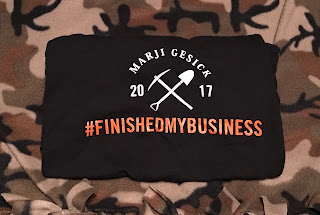 I told Big E it's time to put it away for the year. I have some business to finish and it's time to get to work.
Posted by Lisa T at 8:30 PM No comments: