I've heard Pop describe me as a fearless kid on numerous occasions. This is usually preceded by a story about me jumping off our sailboat when I was three. We'd taken it from Lake Huron down the St. Clair River to anchor and swim to Stag Island for a picnic and fishing. While Pop was prepping to drop the anchor, he heard a splash. I'd jumped in alone and was headed for shore. Since Mom wasn't a good swimmer he was left with a dilemma that he likes to describe as, "Should I save the kid or the boat?"

He saved the boat.

Now, before you get on the outrage train and call Pop out for his past transgressions, let me clarify. I was wearing a life jacket. The dilemma was then not so much that I would drown but that I might not be able to fight the strong current in the river and would miss the island altogether. The next body of land was Canada, at least a quarter mile away. This also explains why he couldn't just jump in and save me. He'd be leaving Mom and my sister on a boat rapidly moving downstream. Thankfully I made it to shore and, as Pop tells the story, turned around, put my hands on my hips and looked at him as if to say, "What the heck is taking you so long?"

This story pretty much sums up my childhood, which is probably why Pop likes to tell it. I was a learn by failure kind of kid. In the case of Stag Island, the story ended well. There were others that did not. The summer I was six, I "failed" so many times I ended up with a broken arm that was masked by so many other bumps and bruises no one knew about it for two weeks. Thankfully I had parents who understood that, as long as the injuries stayed minor, I was the kind of kid who needed to try until things went awry. All those "failed" attempts at trying new things really just became lessons in my own limits.

Thankfully, as I got older, I learned to back up my love of trying hard things with hard work. At the end of my junior year in high school, despite being a mediocre runner (at best), I decided I wanted to qualify for the state meet in the two mile my senior year. Never mind that my PR was over a minute slower than the qualifying time. I'm pretty sure everyone else, including my coach, thought I was nuts, but I knew I hadn't really been working all that hard so I decided to work harder. I paid attention to what the fast kids at other schools did. They ran all year, so I convinced my mom to join a health club 20 minutes away so I could run on their indoor "track" in the winter. They ran twice a day, so I got up and ran every day at 5:30 before school, even convincing the principal to let me run in the hallways in the winter before school started. The girls from the fastest team ran with rocks in their hands to build strength, so on my early morning runs I plucked rocks from the window wells and carried them for three miles.

The first meet of the track season my senior year, I ran a PR, but I was still 30 seconds from the time I'd need to run at regionals to qualify. I kept up my routine, running in the morning and then going to practice after school. After every meet, I'd write down a time goal and tape it to my bedroom mirror. At the next meet, I'd go to the front of the race early on and run the pace I needed to hit it. That night, I'd take the old time down and put up a new one. Right before regionals, I finally broke the qualifying time by five seconds. All I needed to do was run that again on race day. I went home and made a faster goal anyway. When regionals day came, I did what I always did. I went to the front after two laps and ran my pace. Only this time, I didn't want to take any chances. I ran every lap a couple seconds faster than I needed to. The coach had probably told me not to do this, but I needed to see how fast I could go.

I had a huge lead going into the final lap. It looked like I might actually win a race for once, in which case time wouldn't matter because the top two got an automatic spot to states. About 100 meters from the end it all unraveled. Two girls sprinted by. I got third. No automatic spot.

Thankfully I PR'd by 13 seconds, beating the qualifying time by 18 seconds. My coach had been so sure I'd never pull this off he had to break the bad news after my race- he wouldn't be able to go to the state meet with me. He didn't think anyone on the team would qualify so he'd already made other plans.

A week later, I PR'd again at our local Meet of Champions, beating my long time rival for the only time ever. A week after that, in over my head with the talent at the state meet and unable to front run, I finally broke my streak of PR's and had a pretty horrible race. The disappointment was temporary. I'd found my limit and knew I could learn from it. A few months later I got to walk on to the cross country team at the University of Houston. A mediocre runner who wasn't afraid to try.

That "fearlessness" Pop saw as a kid, it wasn't fearlessness at all. I was terrified of a lot of things, just like a lot of kids. I just wasn't afraid to try and fail. As an adult, I strive to keep that attitude. Big E can attest- I am definitely not fearless. I'm terrified of sharks, carrying my bike through moving water, driving in heavy traffic.... Hell, the other day there was a hornet in the house and I hid in the bedroom until he killed it.

But two things I'm not afraid of- trying something out of my comfort zone and working really hard.

This leads me to the end of the Crusher saga started in the last post. Less than two weeks after the 225 bike, I finished off the races needed to get the coveted FIST trophy by running the 50 mile. Three weeks later, not long after re-riding the 40 bike to fix a mistake I'd made on my first go around, I decided to try the 100 run.

I knew this was a long shot based on my sore feet from the 50, but really, what did I have to lose? No one had even tried it yet so worst case scenario I'd be the first quitter.

I headed out at 8am the day before my 49th birthday, figuring it would be really cool to end it on the last birthday I intend to let anyone acknowledge. I had my crew, Amy, and friends Dan and Lisa set up to pace me through the hardest of the night sections. (Because who really wants to run Mosquito Gulch alone in the dark?)

Twenty miles in the foot pain started. Amy met me a few miles later on her bike. She tried to cheer me up, but the pain was starting to win. She escorted me to the car at mile 27. I sat down in a lawn chair and the pain subsided enough I could at least eat. I took off my shoes to change them for the harder section up Wilson Creek Truck Trail, only to discover my right foot was so inflamed the vein in my ankle was bulging. Amy braved touching my nasty feet and rubbed them with her essential oils. At that point we figured it couldn't hurt. I put a fresh pair of trail shoes on and hobbled up the road, with plans to meet Amy and Lisa on the other side, only four miles away, to reassess the pain.

A quarter mile up the road I knew it was over. I was hobbling. I continued on, knowing I would drop when I finished the truck trail. With about a mile to go, I heard ATVs. Not long after, four guys passed me on their side by sides. I noticed one of them was easy on the eyes. They stopped a bit up the trail for a beer. I was really hoping they'd offer me a ride. Instead they asked where I'd come from and at least acted really impressed that I'd made it this far, even though now I was practically crawling.

They eventually drove off ahead and I was left in my misery for the last mile. As I approached the car, Lisa set up my lawn chair and got out my coveted cherry Pepsi. Amy explained that they'd actually been waiting in the wrong place and the ATV guys had told them where to meet me.

"One of them was pretty hot," I said. Then I laughed and followed it up with, "I'm never in too much pain to check out a hot guy on an ATV."

I sat down in my chair, opened my Pepsi, let Lisa add a little whiskey and just like that, I was done. There was no question. When you get to the point where you're hoping that four strange men who are drinking while driving ATVs will offer you a ride, you have probably reached your limit. 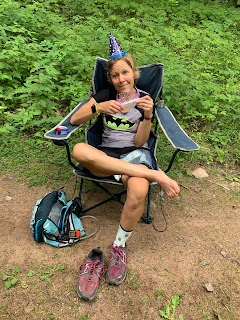 We had a little impromptu birthday party right there in the woods, even though I didn't even make it to my birthday or run 49 miles or anything cool.  Sometimes, you have to celebrate the "failures" because really they're wins-  over the voice in your head that tells you not to try, over the excuses you fight to get out the door, over the people who tell you you're too old, too small, too slow to even try. To me, every day I beat those things is a win, even if I'm still kind of afraid of the dark and mountain lions and lampreys....

So go ahead, fail big. At least you'll know your limit.