Lately I've spent a lot of hours running and very few on the bike. This is by choice, of course, although that choice is strongly influenced by time. If I had more hours in the day, I would run and bike every day, but I only get 24 so I fit in what I can.

Yesterday I'd planned to run twice- not that this was written down, because I don't keep a training log. (I discovered years ago that training logs are a bad idea for perfectionists.) After the early run, errands took over. At some point during the day, I checked my email. There was a reminder that today was the Ride of Silence, when cyclists all over the world ride in silence to remember cyclists who've been hit by cars.

That planted the seed. I started to think about the bike. I really wanted to ride just a little to think about my mom. Of course, my perfectionist side wouldn't let go of that second run. I thought perhaps I might get all of my errands and projects done and still get to squeeze in both a run and a ride.

A few hours later, Big E came home, did a quick-change and headed out to squeeze in a bike ride on one of my favorite trails. As he left, he asked if I wanted to go.

A few minutes later, I discovered a text on my phone, sent 20 minutes earlier. My favorite riding partner was also headed to the trail. Not long after, she called and basically said, "Whatever you're doing, stop. Get your bike. Get here."

That was it. I finally gave in to the pull. Clearly I wanted to ride my bike and needed to let go of that run.

Less than 30 minutes later I was at the trail, ready to squeeze out the last bit of daylight on the bike. I'll admit, it wasn't silent. In fact, I was having so much fun enjoying the unexpected ride with a friend that I never stopped talking. That was okay with me. It was just like one of the non-stop talking walks I used to take with mom.

The run never happened. Dinner was late. I finished up my art project while I cooked. I ended up cleaning the floors at 11pm before collapsing into bed.

It was totally worth it.
Posted by Lisa T at 8:18 PM No comments:

Goose Attack on the Run Commute

On Monday I moved into my new office. There are endless reasons to be excited about this place. It's part of a state of the art training facility. There are showers. Clean ones. It's close to Chipotle. My coworkers are fun and they let me talk about poop. Best of all, however, is the commute.

No, not the drive. The non-car commute. It's bikable AND runnable. Seven miles through decent neighborhoods without too many stoplights.

Today was my first attempt at the run commute. Since I'd only run on about a half mile of the route before, it was like exploring while on my way to work. A mile in, I discovered quotes stamped in the sidewalk.

I was tempted to read them all, but stopped after two, realizing I could save them for future run commutes. I smiled the rest of the way in, feeling like I'd found a secret place, even though everyone on that street has probably seen these quotes every day for years.

The run home was nearly as pleasurable, once I made it past the geese. Unfortunately, the geese also like our little paradise of a workplace. I made it past the few that inhabit the parking lot only to encounter a killer goose just down the street. I was trudging along, minding my own business on the sidewalk, when I was suddenly charged by a pissed off goose ready to peck my legs off.

At this point in this story, I'd like to tell you I was brave and stood up to that goose. On the contrary, I completely forgot I was armed with mace. (I was expecting to need this only in the case of pervert attack. The goose attack caught me by surprise.) I did not stand up in fight. Instead, I turned and ran straight into the street, screaming like a terrified child. Thankfully the car in the street stopped. I'm not sure if they stopped in order to avoid hitting me or to watch with amusement as a grown adult ran away from a bird. Either way, I was thankful not to be hit.

I would've been more thankful if they'd run over that damn goose.

In the end, I made it home safely, which I was also quite thankful for. After years of being terrified of death by shark, moose, bear, wolf, I certainly didn't want to be the girl who died of the dreaded goose attack.

That goose better watch out. Next time I'm fighting. Maybe...
Posted by Lisa T at 8:20 PM No comments:

Flying the day after an ultramarathon seemed like such a good idea when I booked the ticket. Of course, when I purchased tickets to FL with a 50 minute layover in Atlanta, it did not occur to me that if our plane was late I might be expected to travel the length of this massive airport in less than 30 minutes on legs that refused to work properly.

Long story short- I clung to Big E's arm while he drug me through one terminal, onto the train and most of the way through a second terminal only to discover we had no plane.

At least the walk to a new gate and plane was at a much more leisurely pace.

Once in sunny FL, we tried our hand at some new, non-snowy sports. Although the kayaking and paddle boarding were a blast, I have to confess, the deep sea fishing was my favorite. This, of course, had nothing to do with the fact that I caught more fish than anyone on my side of the boat.
That said, it's quite possible that Big E never actually had much of a chance to put his hook in the water. It turns out that while I excel at catching fish, I'm completely inept at removing them from the hook. What can I say? They're slippery little suckers....

Big E's job was not done with hook removal either. He also had to protect my prized fish from these guys while we waited for our fish to be cleaned on the dock. (Because, of course, I also don't know how to filet the fish I catch.) 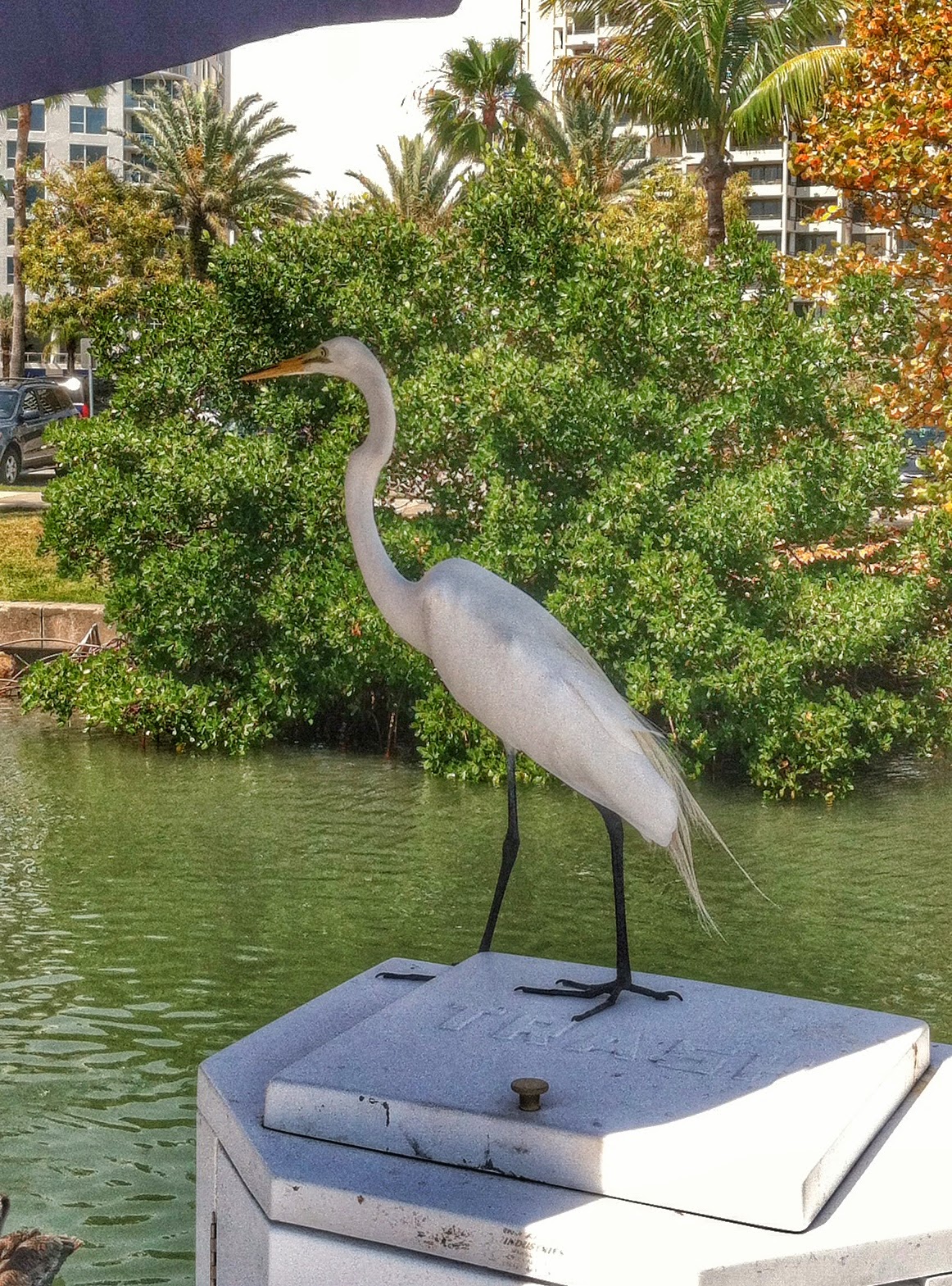 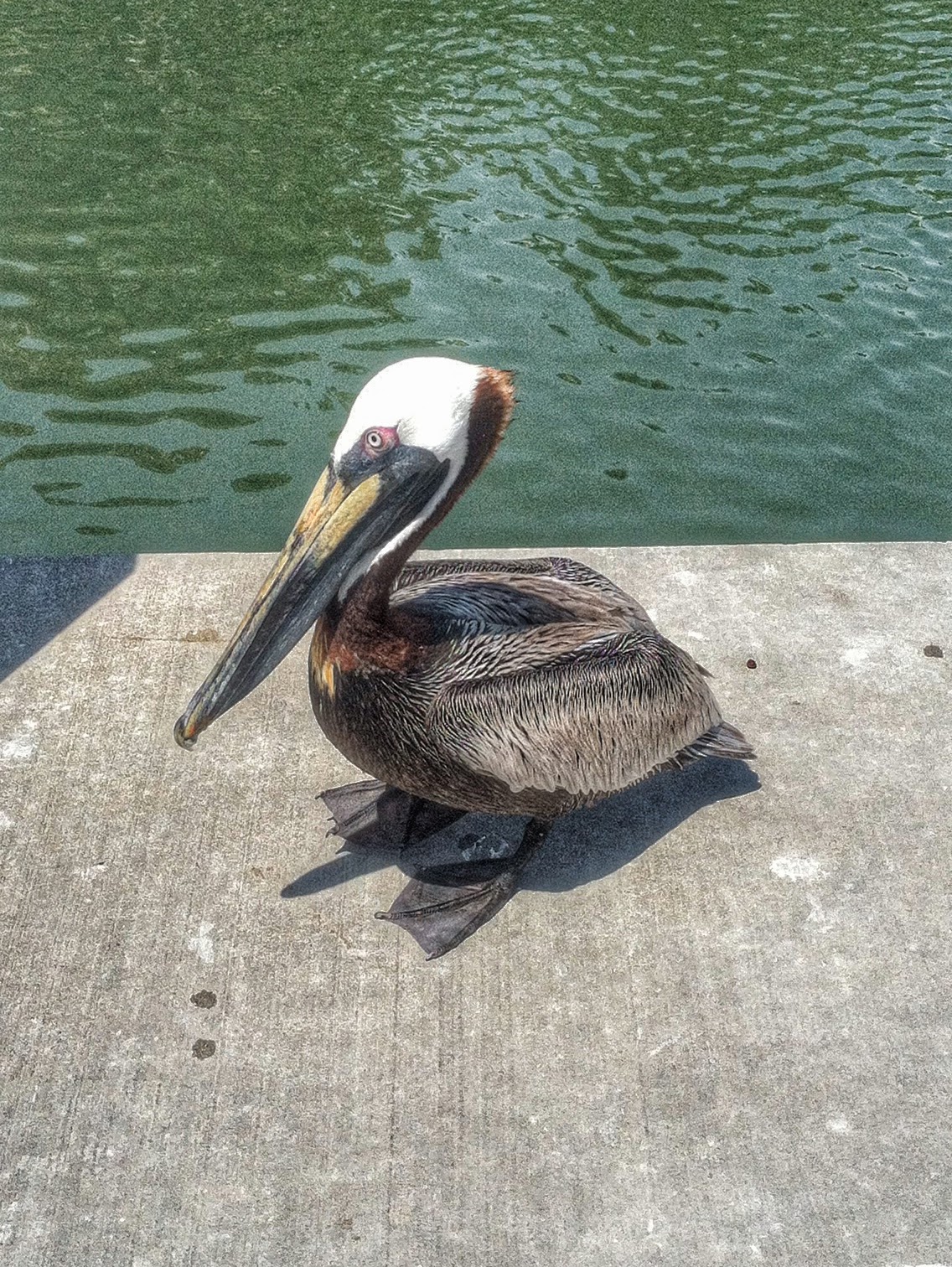 Hopefully I redeemed myself slightly the next day by at least cooking my own fish up for the family. At least I mastered the beginning and end of the process....

Maybe someday I'll master the whole hook removal thing. Until then, it's back to running....