After 4 days and 2600 miles, San Diego just sort of snuck up on me. I have a feeling that I'm sneaking in one last moment of calm before the storm of old friends rushes in. Track practice starts in 45 minutes. My legs probably won't work, but my mouth will probably never stop moving.

The trip started Sat. morning with a little mountain bike race spectating. It was in the 20's. There was snow. I put on all my warm stuff and ran out to find a place to take pictures and waited for orange. The Latitude 45 jerseys are orange. I got some great pics. 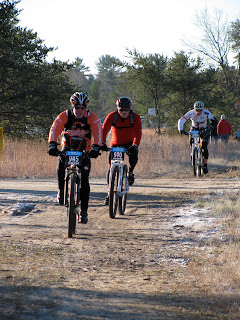 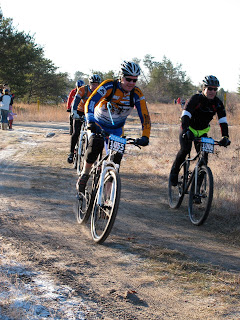 Too bad I don't know these guys. Wrong orange jersey. Of course, when the right one finally went by, I didn't have the camera ready.

So I ran back to the car in hopes of a finish pic. After car ride, a bus ride and a mad dash off the bus when it got stuck in traffic, I found a spot near a corner by the finish where I knew I could at least get a heads up when the orange jersey came my way. 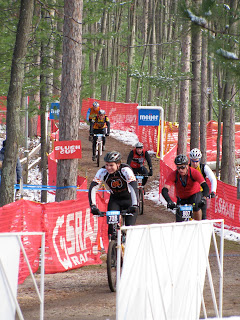 Nope, that's still not the right orange jersey, but it did finally come by, making a sprint for the finish. 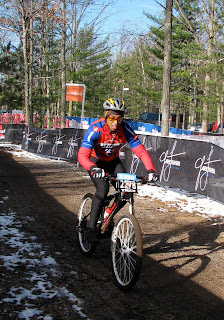 No crashes, no wrong turns, no broken bike.... 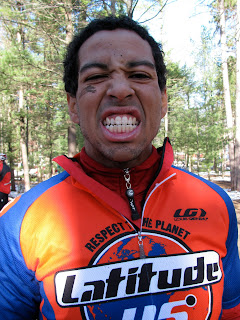 Just a lot of mud.
A couple of hours later, I was back on the road, headed straight south in search of a warm place to sleep for the night. I found it four states later at 4 am.
Three days later, I made it here, waiting for track. I even survived a crazy night in the desert with the best bud last night. My abs still hurt from laughing.....
Posted by Lisa T at 5:31 PM