Why I'm Not a Ballerina

My favorite season is definitely back. I wanted snow. I got snow- every version possible over the course of last week. First is was the light fluffy stuff. I immediately went running in it because there wasn't enough yet to bike and I just had to make some tracks. 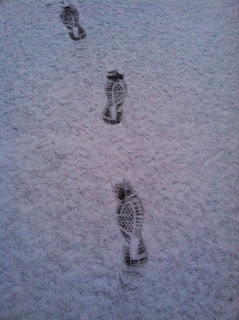 The light, fluffy stuff turned wet that night and the next's days run was through slippery slush. For every step uphill I slid half a step back.

By day three we had a decent covering on the ground. I ventured out on the singletrack and discovered we had just enough snow make any large sticks or branches on the trail impossible to see until they caught my toe and sent me tripping forward.

This is why I'm a runner and not a ballerina.

At some point on day three there was a little snow/rain mix and then the temperature dropped. As in sub-zero dropped. By day four I was running on slippery snow-packed sidewalks in a -10 degree windchill. I was kinda wondering if this winter stuff was really as fun as I remembered.
On day five, while crossing the street, I did a lovely "I'm trying to not to fall on the ice" dance in front of four cars before finally losing the battle and ending up on all fours.

Again, this is why I'm not a ballerina.

On day six I finally realized I would much rather be skiing or riding my bike in the snow.  Duh. Skiing on a lit trail is so much easier than trying to run on ice in the dark! 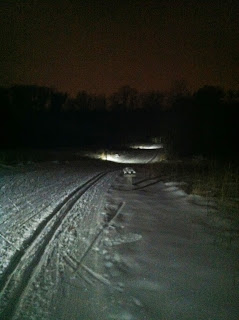