At some point, back in the winter, it seemed like a great idea to sign up to race Lumberjack 100 a week after the 25 Hours of Hellside. What can I say?  One race on my favorite local trail, the other near my favorite place on earth. I couldn't choose.  So, I was left trying to figure out how to get my legs to recover in five days.


Let's just say, I wore my compression tights so much, one of my clients is now referring to them as my "tight black pants".

Thankfully, by the time I arrived in Petoskey (that favorite place on earth, which was on the way to Lumberjack) on Thursday (after wearing compression tights most of the way there in the car) I was actually itching to ride. Of course, that was probably because I knew my ride would take me here: 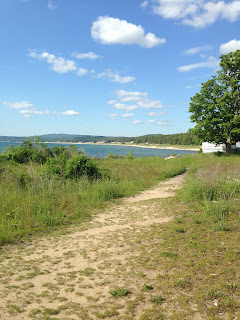 A few drinks with old friends, topped off with a late night rummage through old Playboys 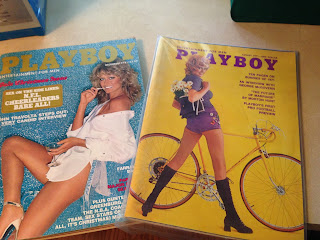 (of course the Playboy from my birthday month and year would have a bike on it) completed my recovery.

I topped it off with a final Friday ride in Petoskey, during which I, of course, got lost at Boyne Highlands like I always do.

I swear someone changes the trails at that place before I come to visit.

Saturday morning I lined up, pretty stoked to ride 100 miles. After a quick prologue down the road, in which I'm pretty sure my heartrate reached its max while I tried to keep up with those with gears, we entered the singletrack and then promptly came to a near standstill.

Have I mentioned how much I dislike waiting in line to ride my bike during a race?

While I practiced my trackstands, the guys behind me for some reason decided that, despite the fact that I was also stuck behind 100 other people moving the same 1mph I was, they should ride off the trail to pass me and then cut back in in the small space I'd left between myself and the bike in front of me.


Unfortunately, I'd removed the douchebag bell from my bike after Hellside so instead of bell-ringing, I had to resort to sarcasm and public shaming these idiots.

Based on how quickly this douchebag behavior stopped, I think I'll stick with this tactic from now on.

Thankfully for me though, after a two hour argument between my body and mind, my body realized that my mind wasn't going to quit and suddenly I felt pretty darn good for the next eight hours, four minutes and 59 seconds.

Yes, in case you were wondering, I sprinted the last few miles to keep it to 10:04:59, and yes, I would've loved to have kept it under 10 hours, but in order to do that I need to figure out how to avoid the four pee breaks I took. 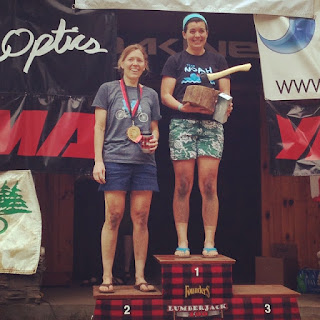 While our podium picture looks as if only two of us raced singlespeed and I was last place, I can assure you there were more than two. I promise. We just happened to ride so fast everyone else dropped out. At least that's how I like to think of it....


I even finished in time to head back to Petoskey that night for some more good friend time, complete with whiskey, ginger ale, spicy potatoes chips and a Sunday morning breakfast with more grease than I normally eat in a week.


How's that for the start of some good recovery?

Of course, my recovery also needed to include some riding so I ventured out on the weekend with Big E. Confident from my few weeks of podiums, I thought I'd show off my jumping skills for him.

Let's just say I put on a show, but it wasn't the really the show I'd intended to put on. 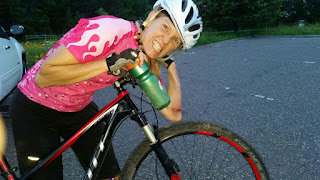 I do believe that, although I didn't impress him with my jumping skills, I may have impressed him with my ability to biff it so hard I ended up with leaves and grass between my tire and rim. 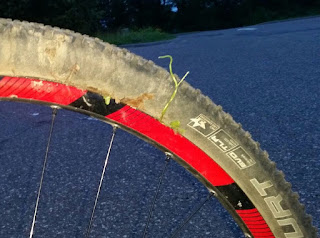 I guess I'll be recovering from a bit more than Lumberjack before Tatanka next week.

Anybody got any ice cream?