Ninja for a Day

My philosophy on training for ultra endurance events is this: train until you're beat down and then really start training. Why? Because that's how you're gonna feel at the end of the race, beat down. You might as well know you can keep moving through that feeling so you don't find out in the middle of a race, in the middle of nowhere, when no one's around to rescue you, that you're a pussy when you're beat down. At least in training if you become a total pussy you can make your way home pretty quickly.

This all leads us to this picture, taken today at the end of two weeks of straight hard training. My goal for the second week of these hard cycles is to never train fresh. Since week one involved  2 1/2 hours of running, 12 1/2 hours of biking, 2 hours of strength training and 4 hours of Jiu Jitsu, I was pretty much set up to reach that goal. Week two, which led to that crazy lady drinking a smoothie, went something like this:

Monday- Wake up at my usual 6:30 pretty sore and a bit crabby, go to work, run on tired legs for an hour, drink a smoothie, go back to work, strength train between clients, work some more, shoot my bow before bed. Nothing too unusual here.

Tuesday- Wake up when the alarm goes off at 6:30, lay in bed for 30 minutes because my legs, hip and back hurt. Roll out of bed, stretch and massage myself with The Stick. Work. Ride an hour and fifteen minutes to the evening Jiu Jitsu class carrying my Gi, arriving just as it starts raining. Dry my bike with my dirty Jiu Jitsu clothes and begin the ride home. Get caught in the rain. Realize the Gi is getting heavier. Pedal harder. Arrive home smiling anyway because I finally had a stripe on my belt to show off to Big E. Drink smoothie. 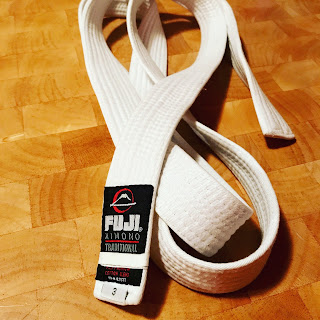 Wednesday- Wake up when the alarm goes off at 6:30. Hobble to the bathroom. Lay back down to survey the soreness. Roll out of bed after 7:00 and make friends with the foam roller before I even eat breakfast. Run for over an hour, including four sets of 97 steps and lots of hills. Drink a smoothie on the way to Jiu Jitsu. Feel thankful one of the kids wants to join us so for once I can actually practice with someone smaller than me. Reluctantly roll with a couple guys bigger than me at the end. Get my ass kicked. Leave looking like a drunk girl doing the walk of shame after a long night out. Love it because this is what hard weeks are all about. (Not the drunk girl part...) Get a massage. Ask her to work on my legs because that's what hurts. Fall asleep on the table and wake up an hour later to discover she was still working on my back and shoulder. Apparently those should hurt. Realize they're probably just numb. Go to work. Do 40 minutes of Pilates with one of my clients. Shoot my bow before bed. Fall asleep so hard Big E sleeps on the couch because he doesn't want to wake me.

Thursday- Wake up sometime after 7. Lay there for 1/2 an hour trying to figure out how to move. Wonder how the hell I'm going to ride a bike and do Jiu Jitsu later. Work. Ride the long way to the evening Jiu Jitsu class, do class, ride the long way home and do some monkey bars on the way to prepare from the obstacle course race I signed up for in August. Get a fish hook (yes, a fish hook) in my tire riding over the 494 bridge. Realize it's not easy to extract a fish hook from a bike tire. Change my flat and make it home just before dark. Drink a smoothie. Eat an entire pizza.

Friday- Wake up sometime after 8 when Big E tries to tiptoe into the room to video tape me snoring my face off. Laugh when he says, "Dammit, I can't sneak up on you now that you're doing Jiu Jitsu because you're turning into a ninja." Realize most of me hurts when I laugh.  Eventually manage to move enough to make breakfast, do some core training and run for an hour including 5 long hill repeats. Drink smoothie. Go to work, do a little more strength training between clients, but take a day off my usual routine of doing 10 pushups every time I check social media because I'm being a pussy. At least I made it to Friday. Shoot my bow. Stretch, foam roll and hang out in my ice tights before bed because I know tomorrow is gonna be long.

Saturday- Wake up at 6:15. Ride to Jiu Jitsu. Throw up in my mouth on the way there because my body apparently doesn't really want to ride a bike today. Stress the rest of the way there because I don't want puke breath when I'm rolling around with people. Ask The Ninja Teacher for gum as soon as he walks in. Try not to notice that a lot of big guys showed up for class today. Practice single leg take downs with poor form. Get thrown on my back by The Ninja Teacher while he shows me how to do them properly. Get up and practice them the right way (I think) because I really don't want him to show me again. Get back on the bike and ride for 3 1/2 more hours on the way home, including some singletrack and some ridiculously overgrown doubletrack. Do some monkey bars on the way for good measure. Drink smoothie. Check for ticks. Ask Big E if he will shave my head because I'm tired of dealing with my hair during training. Let him talk me off that ledge. Because he's always the more rational one of us. Get back to my social media push ups.

Sunday- Wake up when the alarm goes off at 7. Go to the bathroom and open the shades with every intention of getting up. Fall back to sleep. Stay asleep for almost 3 hours while Big E gets ready for his race, which probably sounded like a small marching band was in the kitchen. Ninja failure. Get out of bed after 10. Somehow drag myself back onto my bike to get some more singletrack in. Swallow numerous bugs on the ride because I'm too tired to close my own mouth. Bust ass on the trail just to try to stay ahead of little kids. Drag my tired self home. Drink smoothie. Take crazy picture. Do one last strength session, in which I realize I can't even straighten my legs all the way.

Endurance training success. Now it's time for an easy week.  And some work on my ninja skills.
Posted by Lisa T at 7:03 PM