How Old Are YOU?

El Jefe asked me this week if I felt 40. (I'm pretty sure this was supposed to be a prelude into a conversation about how my 16-year-old-boyish belching at work is inappropriate.) I said no, although I'm not sure if that's really true, because I don't really know what 40 is supposed to feel like. He got me thinking though, about what it is that keeps me feeling young. Right now, it's cyclocross racing because, really, who could feel old when they're riding their bike in circles in the dirt, jumping over stuff and running through sand. The only way it could get better would be if we could do it barefoot. 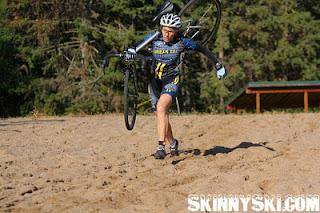 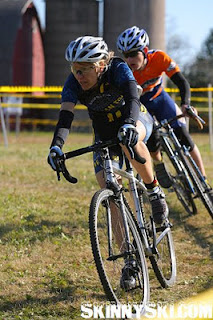 They even let us do fun stuff while the fast guys are racing, like hide money in beer cans to see if they try to pick it up while running up the hills. 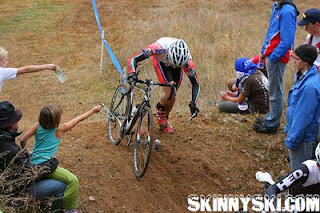 The answer to that is yes. It took awhile though to get someone to pull this one out of my hat. 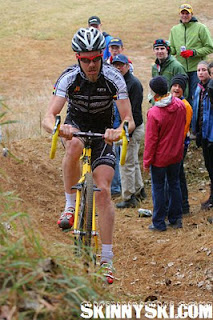 The crowd tried to explain that I'd have better luck if I put the dollar somewhere else. I refused, saying, "If a guy is going to take a dollar out of my clothing, he has to at least look at my face." That's bullshit though. I just didn't want to admit that if I tried to put a dollar in my cleavage it would end up at my feet. (Sorry Pop- at least I did the respectable thing, even if it wasn't for the respectable reason.)
That said, here's one of my favorite quotes.
Youth is not a time of life, it is a state of mind; it is not a matter of rosy cheeks, red lips and supple knees. It is a matter of the will, a quality of the imagination, a vigour of the emotions....Youth means predominance of courage over timidity, of adventure over the love of ease....We grow old by deserting our ideals. Years may wrinkle the skin, but to give up enthusiasm wrinkles the soul....You are as young as your faith, as old as your doubt; as young as your self-confidence, as old as your fear; as young as your hopes, as old as your despair.    B. Ullman
Just think how young we'd all feel if everyday we let go of just a little bit of doubt, despair or fear and replaced it with a little hope.....
Posted by Lisa T at 7:41 PM