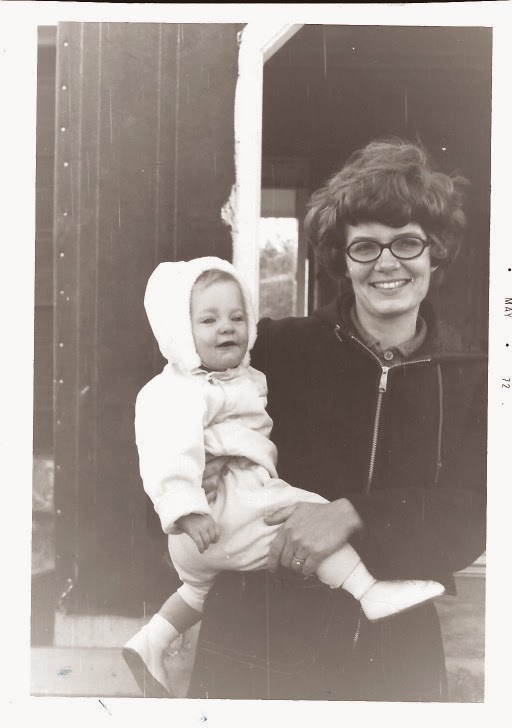 Three years ago today my mom vanished into thin air. I know that is a harsh way to put it, but that is how it will always feel to me. One day we were joking about my boobs, a few days later she was gone.

In the days immediately following her death, I remember thinking if I just kept moving forward, I would feel better every day. After all, I'd spent the first few moments after I'd learned she was gone curled up on the kitchen floor, hysterical. It could only get better, right?

It took about three days to realize my naivety. I'd been taught in college that grief fit this nice pretty process of stages. I expected to move through them neatly, as if passing a test for each stage so I could reach the next and feel better.

Just in case you were wondering- that is complete bullshit. At least it was for me. Losing someone is so much more complicated than that. While I've never actually revisited the specific kitchen floor I occupied three years ago, I've accepted the fact that some days the kitchen, living room, bedroom or even bathroom floor might be the scene of a meltdown for no specific reason. I found myself nearly tearless at her first memorial, but in the last three years I've bawled my eyes out at the circus, cried so hard I've hyperventilated while running on a trail and sobbed my heart out while a friend walked down the aisle.

I've discovered that grief isn't just yours to move through as you please. It fluctuates as others around you grieve as well, it rises up unexpectedly when you hear a song, it smacks you in the face on nearly every holiday. I've also found that, if you lose someone you love at the hands of another person, accident or not, it is difficult to not let your grief fluctuate with the actions of that person.

The night my mom died, my initial reaction toward that person (I'll call him FC because he was the fire commissioner) was compassion. Perhaps this was driven by selfish motives. Maybe even then I knew that it would be easier to move on if I could forgive him. I wanted to think he'd done something we all could've done- looked down to change the radio, answered his phone, been blinded for a second by the sun. After all, he was the fire commissioner so he must be a good guy right?

Within a few days, I found it much harder to find compassion. We learned that FC had caused numerous accidents in the past few years. In fact, the truck with which he hit my mom did not belong to him. He'd totalled his own in an earlier accident. Compassion was replaced with anger. The kitchen floor called my name.

Four months later, FC was officially charged with vehicular manslaughter. Anger was replaced with relief. Another three months passed and the charges were reduced to "over taking a passing a vehicle." FC received a $1000 fine and a six months suspended license. When I read this on the Manatee County Court Records website I was shocked when I scrolled to the bottom of the page. Where the accident had once been listed as fatal, it had been changed to non-fatal. As if that person he hit had......

The kitchen floor and I became good friends for awhile.

Five months later, FC was arrested. Eight charges of child molestation and lewd acts, which together held the possibility of life in prison. Sadly, I was relieved again. In hindsight, I would like to change that, but at the time I wanted him to be punished. It didn't occur to me that in order to be punished, he would need to hurt someone else.

After 15 months in prison, FC was released. The children refused to testify. Let's just say, I hope this day was my rock bottom. I had found solace in the fact that this man might be locked up forever. I didn't care what for, I just wanted him locked up so I could never think about him again. I was livid. At him. At the people who always seemed to protect him. At the world for allowing people like him to exist.

A few months later I saw this quote:

I knew when I saw it I needed to apply it to this situation. I just didn't know how at the time. I did what I thought it meant to "forgive" someone- I tried to accept what he had done, all of it, and be ok with it. I tried to understand it. I tried to sympathize with it. The fact of the matter was though- I couldn't. He's done some pretty bad shit. I didn't want to understand that.

I did want that peace though so I decided to change my thinking. I decided that if my idea of forgiveness wasn't working, perhaps I needed to change it. Perhaps, forgiveness isn't about accepting what someone has done. It's not about finding empathy for a particular act. Maybe instead, it's about letting go of wanting revenge. It's about realizing that sometimes, despite what someone has done, you have to hope he will become a better person, by choice.

My forgiveness, my peace, then, is this- I hope he chooses to be that guy. If he doesn't, I might have to redefine my idea of forgiveness again, but I will keep my peace. Somehow.
Posted by Lisa T at 7:12 PM