Training Brain (aka How to Lose Your Bra)

When I read stories about people who work, train over 15 hours a week and raise children, I'm always amazed because, quite frankly, once the training amps up I can barely take care of myself.  Case in point- it's 11pm and I'm still doing laundry. Two workouts a day has drained the supply of workout gear. I'm not sure the washing machine is going to be able to keep up with this and my never ending pile of massage sheets. 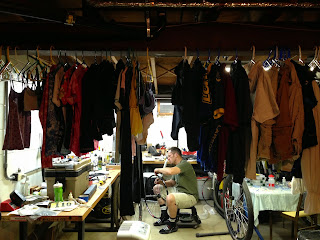 (Yes, Big E is building a wheel behind my wall of wet laundry. Thankfully, this time he's actually working on his own bike at 11pm instead of trying to rescue one of my bike disasters.)

On weeks and days like this I adopt an "in the moment" plan. Basically, this means I go with the flow and focus on what's happening right at the moment so I don't get overwhelmed.  I think about work when I'm working, training when I'm training, eating when I'm eating...and then I pass out and dream about riding with Valentino Rossi. I call this "training brain", which is basically just my term for a brain that can't handle anything more.

Today was one of those days. I babbled some sort of nonsense at Big E when he left early, got up shortly after, ate, prepped food for the day, threw my bike and gear in the car and headed for the office. During my break between morning and evening clients, I jumped at the chance to finally ride some trail after a few days of rain. I headed to Elm Creek and whipped out my usual "stealth change" in the parking lot.

The "stealth change" is my version of getting naked in the car without really getting naked in the car. I prefer not going to jail for public nudity so I've figured out a method to change in which no one would actually see my breasts. This involves putting my sports bra on over my work bra and then slithering out of the work bra and pulling it down my legs and off my feet.

Today, in my training fog, I apparently completed half of my stealth change. I remember the point where I put one bra over the other and then I went through the motions. At some point there was the application of chamois butter, tire pressure fiddling and then I was off onto the trail. Nothing seemed off at the time. In fact, everything seemed completely normal until I returned to the car for a new water bottle and found a bra.

At first, I laughed at the prospect of someone having a little fun in the parking lot and losing her bra. Of course, a moment later I realized that was MY bra and I hadn't had a little fun in the parking lot. In fact, I don't really even know what the hell happened. Apparently in my training fog, I stepped out of the car with my bra still around my ankles. Or perhaps in my training fog, I realized I don't really need a bra and tossed her out the window.  I was so shocked to find it there, I actually checked all the windows to make sure someone hadn't broken into my car and left my bra behind (because, really, who else would even bother to wear a bra this small?), but that was not the case.

Thankfully, the rogue bra was rescued, since I needed it to go back to work. (OK, I could've probably pulled it off without a bra but I like to think I need one.) Now, let's just hope I can keep training brain in check long enough get all my clothes on (and completely off) for the rest of this week's workouts.