True confession #1: I always bawl my eyes out at some point after a particularly hard or long race. I'm not sure when this whole post race syndrome began. My first memorable experience with it was the day after Alexander when I sat on Big E's lap before I left for work and cried my heart out. I had no idea what was happening and I'm not 100 percent sure, but I believe it was then that he explained what it meant to be "shelled".  Usually this whole post race meltdown happens in the first few days after a race, but for some reason this time it was delayed. I'm blaming the 13 hour solo drive the day after the race. I really wanted to melt down, but it seemed dangerous to bawl while driving. Plus, meltdowns are boring without Big E there to make fun of me so I held out until I got home. Somehow I then held out for two weeks, which, based on yesterday's colossal and ride-delaying meltdown followed by another near-miss this morning, wasn't the best idea.

Note to self- just meltdown as close to the race as possible from now on and get it over with.

True confession #2: I finally rebuilt some pedals with the build kit I bought after Alexander two years ago. You'd think after having my pedal fall off my bike in a race I'd want to fix those things up right away. Oh no. I bought a build kit right away, then spent two years swapping the pedals from my cross bike to my fat bike instead of fixing the old ones. Then, after selling the cross bike and buying different pedals for the fat bike, I lost motivation to fix those Candy pedals. Thankfully, the same build kit works for my Eggbeaters so, as part of my quest to take better care of my bike after riding with crappy brakes and a loose headset at Cohutta, I finally rebuilt the squeaky pedals on my bike. 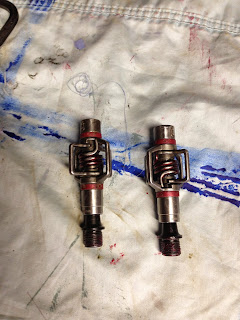 In case you were wondering- yes, rebuilding the pedals makes a difference. Suddenly I can pedal in circles again.

Of course there's still a set of unusable Candy pedals in the basement.

True confession #3: Yesterday while riding I ate the deformed, once melted Snickers bar I carried for 100 miles at Cohutta. Today, while sitting on the couch, I ate the battered Peanut Butter M&M's from one of my drop bags.

True confession #4: It took me three years to finally conquer my nemesis, the wooden berm at Whitetail Ridge. I'm not at all saying I ride it confidently yet, but after forcing myself to ride it six times in one day, I think maybe there might come a day sometime soon where I don't stress about that stupid berm for the entire lap before I get to it. That said, I'm just hoping there's never a cow standing on it when I arrive there because then I'll probably be back to square one.... 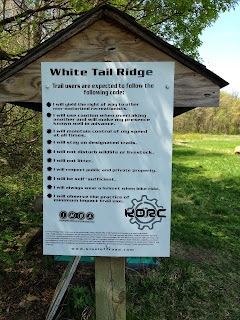