For the Fresh Meat

I don't normally blog about my training because I think it's boring. I like to train. When I'm done training I'd much rather chat or write about something other than how fast or slow or far I ran or rode. That said, I've had a lot of "how did you train?" type questions so here's a quick little summary of my Marji training.

I mostly just ran slow a lot. Really. Nothing fancy. Just lots of aerobic zone stuff with some drills thrown in to keep the leg turnover when the miles built up. My biggest week was 91.5 miles, which was an accident. We came up to train on the course and I ended up running 52.5 miles in two days, which was a little more than I'd planned so it pushed me over 90 miles for the week. I had a couple of other 80+ mile weeks and lots of 70s. My body loved 70 mile weeks so I went with it. I did a few 20 mile runs before the big weekend of 52.5 and then did another weekend of 45 miles in two days three weeks later. On big weeks I focused on hiking uphill fast because I knew I'd need this toward the end. I ran hilly trails as much as possible. I'd guess close to half my weeks were over 100 feet per mile of elevation. The last month or so I started practicing my night running. I probably should've done more of this, but when you live near a trail where a dead body was once found, it's hard to convince yourself to run a lot at night. Not to mention the fact that I frequently find condoms and bras on this trail and I didn't really want to spoil anyone's fun...

All that said, I think there are a lot of things other than the physical training that are important if you're going to finish Marji. So here are my tips to the newbies, who Todd affectionately refers to as "fresh meat".  These aren't meant to scare you off, because if you're crazy enough to sign up after seeing that picture of my inner thighs, you're probably not scareable. So here you go, my "How to Finish This Bitch" tips.

Prepare for this to be a team effort. As you'll be warned over and over and over on the Facebook page, there are no add stations at this race. If you're running, there are also no trail angels. That means it's you and your crew. You will not finish this race without them so be nice and appreciate what they're doing. Tell them exactly what you need ahead of time and then let them do it so you can just run.  By mile 80 you're not even going to know what you're doing anymore so it's best if your crew takes over all decisions at this point. To help them out, make sure you're organized, because what crew wouldn't love a food tub with cardboard dividers! 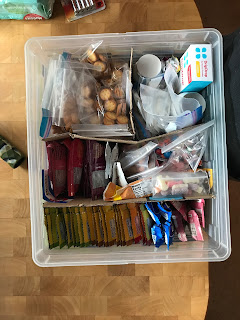 Adding on to that thought, learn to be low maintenance. You're probably going to be running for 24+ hours unless you're crazy fast. You'll have to poop. You might have gas in front of your pacers. You're going to get blisters. Something will probably chafe. You're likely going to fall down at least once. Your headlamp will probably run dim at some point. Your shoes will get wet at least twice, more if you fall in any of the endless trail-blocking puddles in the last 15 miles. When this stuff happens, you're going have to accept it, deal with it the best you can and keep moving forward. If you freak out every time something isn't perfect you'll never finish and your crew will probably hate you.

Be ready for weather. Every kind of weather.  It could be 60 and sunny. It could be 90. There could be a monsoon. It could snow. Heck, this is the UP. That could probably all happen in 24 hours. Add that to the fact that when you're exhausted your body won't respond as well to weather changes as you think it will.  You never know what you're going to get and how your body will react so just put your whole running wardrobe in the support vehicle. (And don't bring 4 pairs of the same running shorts. YOU WILL GET CHAFED!)

Don't count on anything flat. Seriously, the easiest part of the course this year was the 6 miles of false flat to Ishpeming from miles 59-65. Yes, the easiest part of the course is UPHILL. That said- don't let the first 18 miles fool you either. They're significantly easier than the next 82. Don't let this ridiculous picture fool you either.  It's either photoshopped or Ryan Stephens found an easy section of trail I apparently slept-ran through. 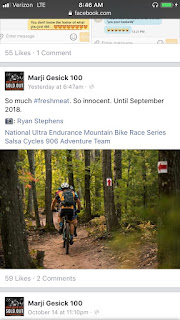 Be prepared to be out there. When you look at the course map, it seems like you're never really that far from a road, but trust me, being just a couple miles from a road in the UP is out there and you'll feel it. Couple that with the fact that Danny Hill seems to be able to build 2 miles of trail on an acre of land and you'll discover that you'll sometimes even feel "out there" when you're 1,000 feet from Ishpeming. Case it point:
Respect the course. If right now you're saying to yourself, "It's just Michigan," rest assured that in 11 months you be saying, "Holy shit, THIS is Michigan?"  Seriously, 12+ hours after it stopped raining, I was still falling on my ass on wet rock. I finally resorted to sitting down on wet slabs of rock and just sliding down. This was at mile 80 something when sitting down was about as painful as running, but since it was that or fall on my ass, I sat.  I won't even try to describe the roots. Let's just say I face-planted more than once, usually on a section that said, "Blame Todd." You learn quite quickly at this race that if says "Blame Danny" along the trail, you're about to go uphill and if it says, "Blame Todd" well, you're probably going to face plant, fall on your ass or curse.

On that same note, understand that this course is not made for fast times. On the contrary, it's made to make you see just how tough you are. Instead of going into it thinking a buckle will be easy or you're going to get a certain time, go into it understanding that this is all about seeing just how gritty you really are.  So, if you find yourself hoping they'll actually cut the course back to only 100 miles next year or not make it any harder so you can go fast or get a buckle, you've probably signed up for the wrong race. Remember, the thing that makes this race so unbelievably cool is that they don't give into the pressure to make it easier so if you finish you get to feel like a badass.

Don't make excuses for yourself ahead of time.  Quit saying "what if" or "I wish" and go train. When life throws the 100's of curveballs at you that it inevitably will in the next 11 months, take them as a challenge instead of an excuse. Instead of saying, "But this happened, so I couldn't finish," be prepared to say, "All that happened, and I finished anyway," when you cross that line.

Be prepared for this race to haunt you, even if you finish. Case in point, this is me with the race director of the Mohican 100 at the finish line. He's offering me a free entry into the race, to which I replied, "But then I'd have to run 100 miles again." 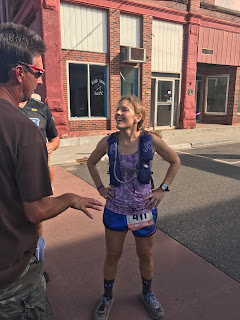 Two days later (ok, maybe 5 days later when the chafe started healing) I wasn't just thinking about running 100 miles again, I was already thinking about coming back to Marji in a couple years to try to run under 30 hours, despite the fact that I was still having nightmares about the course. There is something about this race that will get in your soul and you won't be able to let it go.  You'll know that you could go somewhere else and run or bike faster, but you won't care. You'll want this one for some crazy reason that is probably Todd and Danny's fault.

Finally, don't forget to smile as much as you can. In training. On race day. In life. It makes every thing easier. Remember, you chose to do this. Plus you get to run or ride for a whole day, likely more. How often does that happen?