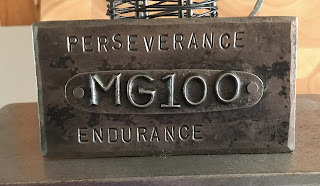 My very own special, "Perseverance and Endurance" award from Todd. It came with a letter that finally brought out the inevitable post race meltdown. This was perhaps the longest I've ever held off a full meltdown. There were a couple of mini-meltdowns, but I knew the big one was lingering, waiting to blow. Today was a the perfect time.

I spent the morning getting new tires, which really shouldn't be a big deal. However, despite the fact that I can run 100+ miles, post concussion syndrome still sometimes brings on unbelievable anxiety at the thought of driving even a few miles in traffic. So, despite the fact that I slept great the night before Marji, I tossed and turned all night last night at the thought of driving 25 miles in traffic to get new tires installed on my car.

Anyway, I'd made it to the dealership and back without major incident, despite an attempt by my chimp brain to throw poop and create a meltdown at a stop light. I was having a little lunch when Big E waltzed in with a box.

I knew from the return address it was from Todd. I gave it a shake and made some sort of comment about how it better not be a buckle since I didn't go under 30 hours. Big E gave me his knife to open it, which I promptly stabbed into my own thumb instead of the box.  I'm pretty sure I was already trying not to cry so I handed over the knife and box and waited for Big E to open it.

Inside was my very own non-buckle award and the nicest letter ever. Big E asked me to read it. I made it past my name before I started bawling my eyes out. The morning's driving anxiety coupled with this incredibly nice gesture was just too much to bear.

So Big E read while I cried. Not because I was sad, but because I'm just plain overwhelmed. Because the real world calls and it is oh so much more complicated than my peaceful little "put one foot in front of the other" world that is endurance racing. Because something that I put my entire heart and soul into is over and I'm not quite ready to embrace what's next.

Thankfully, Big E understands these meltdowns. He gets that I'm so much more comfortable riding all night on gravel, pushing through a 24 hour race or running 100 miles than I ever will be driving a car and dealing with the real world. He is also probably the one person who can truly understand that Marji was about so much more than running 100 miles.

It was a huge F-you to 7 months of dizziness. It was the biggest middle finger ever to a neurologist who thought drugs would be a better solution than fighting back. It was a way to show the eye doctor, chiropractor and whole lotta friends who helped me fight back that it was worth it.

So Big E gets it when I cry. He knows that it's part relief, part sadness, part happiness and part "holy shit what do I do now." I should hang on to him just for understanding this odd dichotomy that probably makes me look like a complete crazy person every time I race. This dichotomy is especially evident once I start laughing at myself while I cry, which is usually when he snaps a photo. We won't share that craziness here. It's scarier than my chafed crotch.

Anyway, once my meltdown was under control, we posed the award with Trophy, 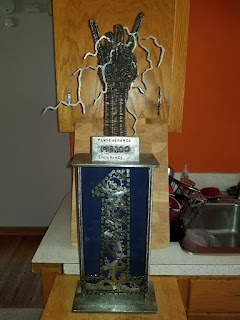 which I believe is now technically Big E's, but will always be near and dear to my heart.

Then I did what any person in mid-meltdown would do.

I signed up to ride the 50 next year. On my single. Because it was that or a fat bike. And I don't want to push 29 pounds of bike through the last 15 miles.

Two weeks ago, I swore next year I'd just cheer, yet somehow Marji sucked me in again.

This is Todd's fault. He made sure this award would show up on registration day. He knew I wouldn't be able to resist the lure of Marji.

He'd better be ready for another sweaty hug next year.