On the Beaten Path

This morning I lacked inspiration. I sat down to write, started my research, opened Word to start typing and said, "Screw it, I'm riding my bike instead."

When I don't have words, I don't have words. Usually the bike brings them. It's always worth a shot. The worst that could happen is I have a sweet bike ride, return home and still have no words. Not such a bad situation...

Riding from home is always an interesting experience. To sum it up quickly- every time I ride or run here, I'm even more convinced that the state of Minnesota has never denied anyone a driver's license. I'm quite certain it is also impossible to lose your driver's license in this state. Stop signs are apparently optional. They might as well take out the two by our house, because I have yet to witness anyone other than myself actually come to a complete stop at either of them. Blinkers? In MN they are used as an apology instead of a warning. "Oops, sorry I purposefully cut you off." "Oops, sorry, I turned left in front of you, but getting where I need to go quickly is more important than your life."

Now you know how I feel about MN drivers. (You've also probably figured out that the bike brought words.) Needless to say, I'm a fan of the bike path.

Of course,  I've been warned of the sketchiness of some of these urban bike trails, but I figure given the choice between drunken bums and traffic, I stand a better chance with the drunken bums. So, today's ride began with a little urban exploration. 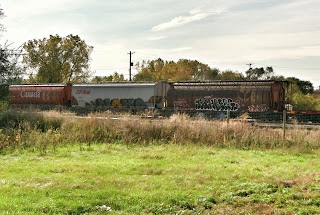 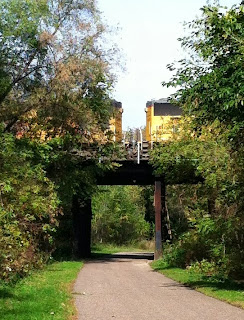 As much as I complain about the traffic here, one of the things I love about St. Paul is how quickly the urbanness turns to this: 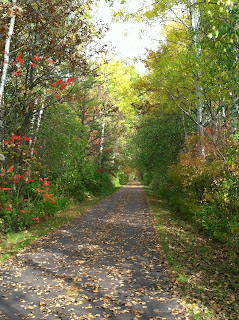 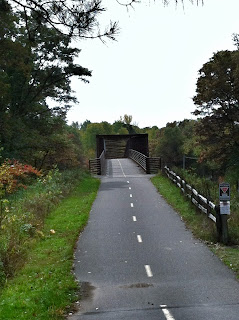 Of course, it was still pavement so in the end, I had to ignore a few "No Trespassing" signs in search of some dirt.  After an unsuccessful attempt to circumnavigate Sunfish Lake via dirt, I opted for some tried and true double track on the way home just to get a little dirt fix. 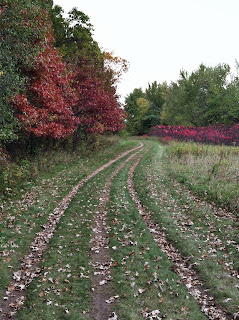 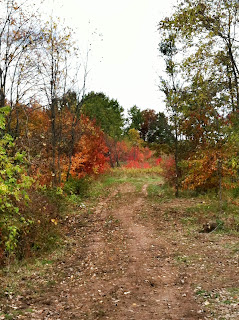 Eventually I had to hit the pavement again to get home, but at least I made it all the way to my street before someone nearly ran me over....
Posted by Lisa T at 5:31 PM