It's official. There are just too many kinds of bike racing in MN for me to choose just one. After so much fun with cyclocross last fall, I thought that would be my favorite. Then I discovered the long gravel races. After the Gravel Conspiracy I figured I'd rest up a bit for cross and that would be it. Then Richzilla had to go and put on three night mountain bike races. So much for resting the legs...and now I have yet another kind of racing I love. Not that I'm complaining because who can complain about having TOO many bike racing choices? 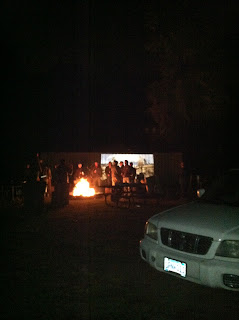 I especially can't complain when those night races are followed by a bonfire, movies and camping.  Plus, the boys entertained me at 1:00am by attempting to ride the new stockade feature at Hillside.
Heath got the farthest the first time so we marked his spot. 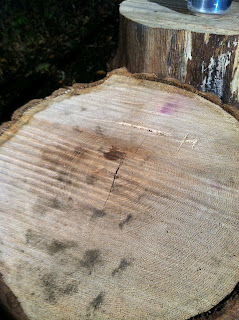 Of course, boys will be boys so they were back at it the next week. Thankfully, I learned not to scream into the camera this time so you get to hear Richzilla yell at Big E instead.
(Just a note to my Pop- don't worry I don't try this. I have a hard enough time staying upright on the trail!)

Now that the night races are done, I figured I would finally focus on cross. Of course then I heard there's one more gravel race. Then there's Iceman. Maybe I'll have to save cyclocross for December. Oh wait, then there's snow biking....
Posted by Lisa T at 7:55 PM