I'm not really sure where to begin. A person (or at least not a sane one) doesn't just hop on a bike on the morning of a 382 mile bike race and start pedaling. I mean, you actually do sort of just hop on your back at 5am and start pedaling, but that's not really the beginning. I guess the beginning was back on Feb. 11th when I sent Chris this email:

That was it. Then I all I had to do was just ride my bike a lot. Of course, it snowed for about 2 more months after that so I ended up riding my fat bike a lot, which was probably a good thing, because by the time Sam was all loaded up for Alexander, she ended up weighing about as much as Gracie the MiniMuk. 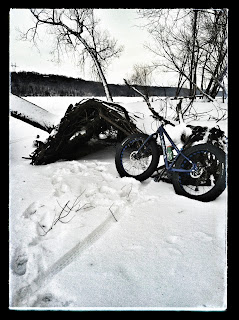 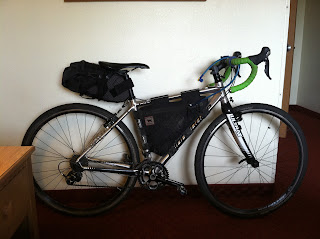 Anyway,  on Friday, I rolled out of the Spring Valley Inn and into town for the 5am start on a fully loaded Sam. (I was happy to discover that my awesome Barking Bear Bagworks framebag can hold 100 oz of drink and 2 whole pizzas).

I'm just going to fess up right now, because it will come up numerous times, that I was fully under-dressed for the start. You'd think that when I arrived in my shorts to find everyone else in full rain gear, I might have booked it back to the hotel to get mine. Unfortunately, I didn't actually have full rain gear at the hotel because, well, I don't actually own full rain gear.

So, I followed Chris and the rest of the crew out of town in the pouring rain in my shorts and flimsy jacket. (Hey- at least I had my 2 pizzas!) At first we rode in one big bunch, with me in the back. Eventually, I worked my way up to Martin (whose name I thought was Mark until the finish), happy to have a little company for awhile. At some point, I realized I was getting really cold so when Martin made a pit stop, I pulled over to add a layer. I managed to get the warmer clothes out of the bag and get some of them on, but when it came time for the fine-motor skills stuff, I realized my hands were useless. So there, in the middle of the road less than 25 miles in, I had to ask Martin to buckle my helmet. When he was done, he zipped my jacket. When we hopped back on our bikes and headed down the road, I realized I had to use the palm of my hand to shift. I also realized that if this 382 miles was going to happen, I needed to warm up.

Less than 10 miles later, I got my chance. I was riding along, trying to keep Martin in my sights, when my right foot started to feel stuck to my bike. I took a few more pedal strokes and suddenly I was pedaling with my right pedal attached to my shoe, but not to my bike. Over then next 1/2 mile, I ended up putting the pedal back on numerous times, just to have it come off a few pedal strokes later. As other riders caught me, they tried to tighten it down, but to no avail. Eventually, I put the pedal back on the bike and resorted to running the ups and one-legging the flats and downs. (There is video of this out there somewhere) At some point during the 6 miles of this, I realized I was warming up. Every cloud has it's silver lining....

Thankfully, I'd chosen a section with quite a bit of downhill to break my pedal so I made it to Preston with quite a few other riders. We warmed up in the Sweet Shop and I called for a ride. At this point, I figured my race was over so I grabbed my seat bag and started giving things away- hand warmers, garbage bags, my phone number.....

One thing I've learned over the years is that you have to start crazy endeavors such as this with total acceptance of any outcome. If you go in thinking you'll be devastated if you don't finish, you're doomed. So, when Courtney came to pick me up, I was okay with going. As I said goodbye though, Ian said something along the lines of, "Go find a way to get yourself back out here." Then I got in the car and Courtney said, "You know, I have Crank Brothers pedals on my bike." Then I got a text from Big E that said, "Bill has pedals and he'll drive them down."

By the time we got back to the hotel, I walked into Chris's room and said I was going back out there. I told him I'd wait for Bill's pedals and go back to Preston. "There are two pedals on my bike right there," he said.