I finally have to stop hating on Starbucks. I’ve explored half the Oregon coast and I absolutely cannot find anywhere else with free internet AND somewhere to plug in the computer. My battery has a short life and I’m sick of sitting in the McDonald’s parking lot trying to upload to the blog while charging the computer via the lighter. So- here I sit in Starbucks. Now if I could just get them to sponsor my trip if I promote them on the blog!
I've also quickly discovered that I simply will never be able to tell all of my stories on the blog. No one would read my 2000 word posts. I’ll just have to write a book. Until then, I’ll try to keep it short and sweet with lots of photos.
I’ve discovered the pleasure of free “camping” so my 4th of July began when I woke up at 6:30am parked between two RV’s in a casino parking lot. This is a great idea until you wake up having to shit. Then it’s just plain uncomfortable.
I had scouted my breakfast spot the night before when I got this view of Heceta Head Lighthouse while hiking. 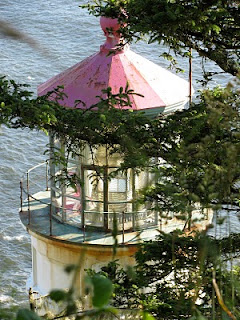 I decided breakfast at the actual viewpoint would be a splendid idea as I heard it is less windy there in the morning. I discovered the term “less windy” is definitely relative when it took 10 minutes to boil a half a cup of water for my oatmeal.
After breakfast, despite the howling winds, I was finally able to do something I’d been trying to do for days- capture a picture of a lighthouse right when the light goes off. 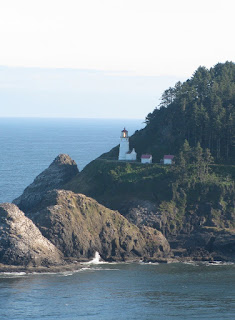 Supposedly the light on this one can be seen 22 miles out to sea.
After breakfast I spent a couple of hours running the trails at Cape Perpetua. Afterwards, I headed to Yachats for their infamous La De Da parade. Oh, how small town parades amuse me! I’m not sure whether the guy next to me laughed more at the parade or at my reaction to it. Supposedly 635 people live in Yachats. I’m pretty sure they were all in the parade. I probably could've bought a bag of candy to throw and jumped right in and no one would’ve been the wiser. Especially if I’d had a costume. Let’s just say the parade explained why I’d seen so many weird outfits in town earlier. First of all there was this guitar playing bride: 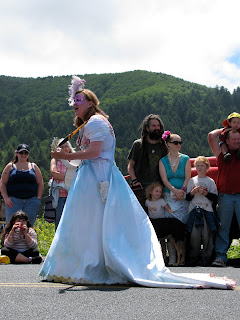 Note the perfect little hippie family in the background. Pretty typical of this area. At least around here no one calls ME a hippie.
Then there was this dancing tractor man: 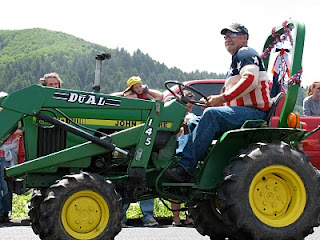 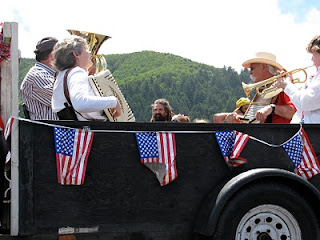 There were some ladies promoting a construction company: 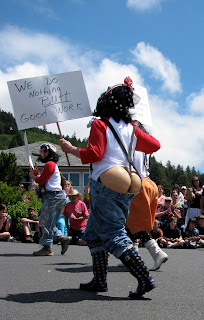 The other side of her sign said, “Free hugs.” Gee, I think I’ll pass….
My favorite though, was this fireman in his 80’s outfit. I got the impression he wears this daily. 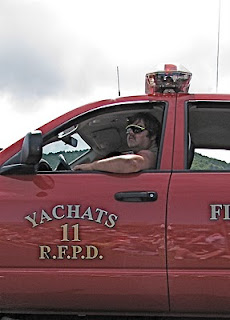 I’m just gonna go ahead and spare you the pics of the belly dancers. There was a lot of belly.
While we waited for each group to come through, the little boy next to me and I amused ourselves by throwing the candy he didn’t want to kids across the street. This was all fun and games until he beaned the Statue of Liberty in the head as she went by and she came after us on her skateboard. His dad said, “Oh boy, you’re in trouble now!”
Well, we all know I’ve heard that before!
Happy 4th!
Posted by Lisa T at 4:01 PM