One of the last promises I made before leaving FL was to not give any strangers a ride on my trip. I really thought I could keep this promise.
Then I met Travis on the plane.
Travis got out of the Marines a little over a month ago. He packed up is backpack and headed to Europe for a month. When he sat down beside me on the plane, he had been in 4 different airports waiting for standby planes for 3 days.  We were going to land in Sacramento. He needed to get home to Ukiah, 2 and ½ hours away.
I had no agenda except to go north. I would probably have chosen the boring route and gone north on I-5, but then, Ukiah was north and who could really deny Travis a ride?
By the time we landed in Sacramento, we’d bonded over the story of Gram Parson’s body being burned in Joshua Tree.  Having lived there for 6 years, I knew the story well. He knew it too since it was his dad who did the burning.
So yes, I gave a guy a ride after he told me his dad was a Hell’s Angel who burned someone’s body. At least the guy was already dead.
After he took me to his favorite lunch spot in Sac (where I’m pretty sure he consumed a 6 pound sandwich and I ate a half a jar of banana peppers) we hit the road to Ukiah. An hour and a half worth of bull-shitting and story-telling later, Travis realized we’d missed our turn off….30 miles ago.
Four hours and a bar stop later we made it to his family’s ranch in Ukiah. After a tour and a chat with his stepdad and aunt, I realized I still had quite a bit of day light left so I hit the road.
To be honest, last night when I still hadn’t found a place to sleep by 10:30 (which means I’d been awake for 20 hours) I started to regret this decision. Luckily, the nice ranger at the state park saved me $35 in camping fees when she informed me that I could’ve just pulled over at any of the numerous pull-outs I’d seen in the last 2 hours.
Less than 30 minutes later, I was sound asleep in the van for free in a spot she’d recommended.
Thanks to Travis and the detour to his ranch, by 8 am this morning I was running on the beach and I found these: 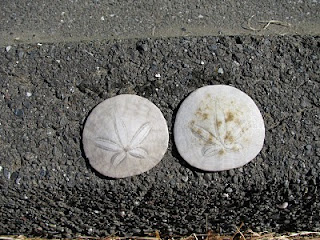 Again, the little surprises in my life lead to something wonderfully unexpected.
Posted by Lisa T at 2:54 PM