I arrived in Vancouver Monday afternoon. I was here less than 4 hours before my car was towed, which basically means I lost my car and my home in a foreign country. There was a bit of panic, followed by the realization that in the grand scheme of life, spending an hour and a half locating my car and retrieving it (for $120) is really not that big of a deal. Plus, I learned my way around the area pretty quickly since my taxi driver got lost. Thankfully I had looked up the directions online beforehand so I could help him find our way. It always pays to be prepared. At least he gave me a discount.
The highlight of Vancouver so far definitely had to be this place: 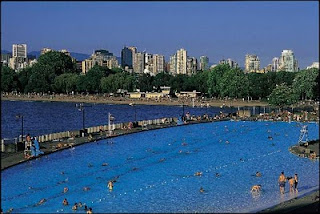 A 137 meter long pool right on the beach. It's so long, they don't even need to put lane lines in. Everyone just swims one direction on one black line and the other direction on the other. It looks like it would never work, but somehow there is total organization out of what appears to be chaos. I'm kinda thinking that this is support for the fact that if you give human beings a lot of freedom they actually handle it pretty well, because I must say, I've never swum in a pool where people were so nice to each other. Maybe it's the lane lines that make us crazy in most pools.  Hmmm....now if taking the lines off the road worked this well the world would be a much better place.
Posted by Lisa T at 8:28 PM