The Kindness of Others

You'd think that being on the road with no job I'd have a lot of time on my hands. It's been a month now and still just can't seem to find enough hours in the day. Some nights I find myself parked in the van, hiding under the covers with a flashlight writing, torn between not wanting to get caught sleeping in someone's neighborhood and not wanting to forget something amazing that happened that day.

The last two days have been nearly indescribable. The kindness and generosity of other people has pretty much left me looking at the human race in a whole new light.

First I met Li in a coffee shop in Seattle. Four hours later, we finally forced ourselves to stop talking. I left the coffee shop with a list of things to do in the area and plans to meet her the next day. She volunteers at the Center for Wooden Boats so we met there the next day. After I spent some time checking out the boats, we took a rowboat out on Lake Union: 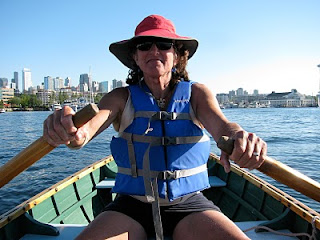 Li, rowing my butt around! Really, I did do some of the work! 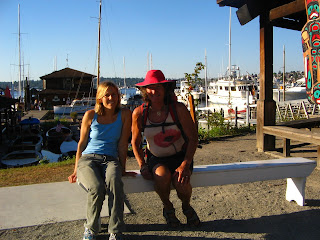 Post row, outside the Center for Wooden Boats
Photo by Li
After our row, we hiked up Capitol Hill and made some dinner in the park. I was a little worried about hiking back by myself in the dark, but it was worth the views: 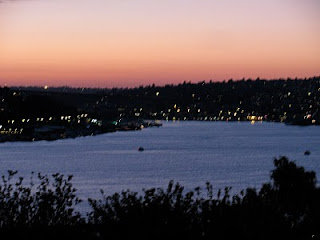 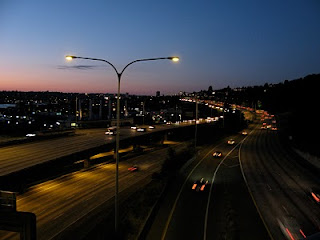 Unfortunately, I couldn't capture the sound in this pic, but standing on a road over the interstate taking pictures is quite the sensory overload!
Yesterday, I headed out to Camano Island to the other Center for Wooden Boats site, hoping to paddle a kayak. They only had doubles so I put on the running shoes and headed out on the trails. When I got lost, I stupidly thought I could just head for the water. Ummm- can you say blonde moment? Needless to say, nearly 3 hours later I had pretty much run the perimeter of the island. If you need any real estate on Camano, let me know. I now know every house for sale on the entire island. I also know a nice realtor who helped me find my way and gave me water!
After my 3 hour tour, I headed to Bellingham. After a shower at the Y, I headed to the marina to cook some dinner. As I was cooking dinner, nearly everyone that walked by spoke to me. Just as I was marveling at their friendliness, Julie walked up with her dog. She saw that I was cooking beans and invited me to her boat for some "real food" as she put it.
What came after this was truly amazing.  This awesome woman, who had known me for less than an hour, let me sleep on her boat for the evening. She went home for the night and left me there with her boat, the bathroom code (always essential!), snacks, wine and best of all, electricity so I didn't need to hide with my flashlight!
Honestly, I don't really even know what else to say except thanks to the incredibly kind people I've met on this trip!
Posted by Lisa T at 9:39 AM