I'm pretty sure I'm in the only place in the world where people say I am from "down south." Yes, I know some of you who think I have a funny northern accent are laughing, but it's true, to the Upper Peninsula folks I'm a southern girl. You only get to be from Up North if you grew up in the UP. We southern folk let them get away with this high and mightiness because we know they've endured countless brutal winters.

Brutal winters aside, it's amazing here. I went to Houghton first. I had this hair-brained idea I'd take the ferry out to Isle Royal National Park. Then I found out it was a 6 hour ride. Each way. So I hung out in Houghton, which was fine because it was a beautiful day. 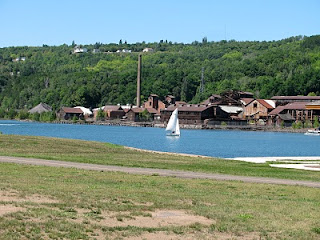 That path along the canal goes for miles. Lots of biking and running away from the road. 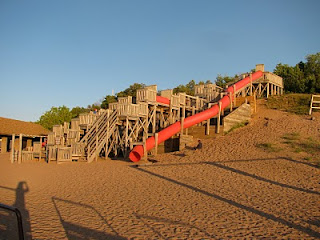 The largest playground ever! 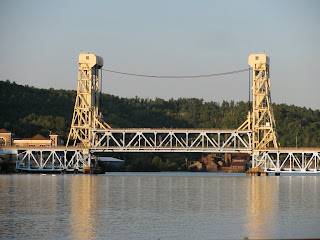 I grew up in a town with a drawbridge so this one brought back good memories, especially when I was waiting in line right on it when they opened it up. 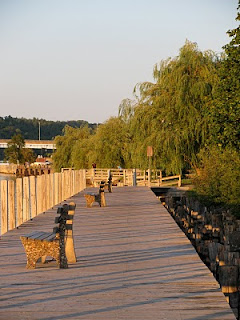 Miles of public boardwalk.
The people were pretty darn friendly too, or at least I thought they were until I went into the bar for a drink and witnessed a woman waving money at the bartender while calling him "boy." It was alumni weekend and apparently that made people "act like assholes" as the bartender put it.
It made for good people watching though especially since this particular place was famous for their pickled eggs. Not much could be more amusing than watching a bunch of falling down, drooling drunk fools eat pickled eggs and knowing that when they barf later, it's gonna be all about the pickled eggs. Yuck. I'm pretty sure the bar serves them just for the punishment they must provide later, especially to those who covered them in Tabasco.
I moved on to Marquette yesterday, which is even more beautiful. No pics yet though because I ended up dining with a local 81 year old last night and didn't get to take any. You'll have to come back tomorrow for pics and lots more friendly people stories!
Posted by Lisa T at 4:19 PM