Yesterday I ran a marathon. Then I drove nearly 500 miles. I told you it might be a big day. 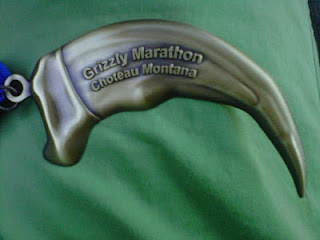 My return to racing (if you can call it that) was a pretty good parallel to my life right now. I’ve never done a marathon without meticulous preparation before. Usually I spend months doing long runs, stop drinking alcohol for a month and then get so nervous I can’t sleep the night before.
I started contemplating this marathon 6 weeks ago. The farthest I’d run was 12 miles. Once I was on the road I did 3 more long runs. I’d guess they were between 16 and 21 miles but I don’t really know. I got lost on all 3 of them. I ran out of water on 2.
Last week I figured if I could make it through that I could survive 26 miles with aid stations and arrows on the road.
Of course that was before I realized the race was at 4000 feet. It was also before I knew that it went through territory so known for grizzlies that the guest speaker at the pasta dinner was a bear expert. I guess that’s why they call it the Grizzly Marathon.
I drove over to Choteau from Kalispell on Friday. I picked up my number and checked in with the race director to make sure I could skip the pre-race meeting and dinner. I figured I didn’t need any more fear of the grizzlies than I’d already developed. Plus, I had my tactic for avoiding a bear attack all planned out- find the biggest guy in the race and stick near him.
My race plan was to finish. (And not get eaten by a bear.) Nothing else. So basically my race plan was to not race.
Let me tell you- this is much more fun than racing a marathon. I didn’t have to pass on drinks with friends 2 nights before. I didn’t have to sit around with my feet up the day before. I slept well the night before. I stuffed my belly with corned beef hash in the morning. I left my watch in the car so I wouldn’t know how slow I was going. I jogged over to the start line less than 5 minutes before the race, got in the back of the pack and started talking to people.
I like this no racing racing thing.
The race was just as mellow as the preparation. I found a tall guy in a fluorescent orange shirt to use as bear protection. He’d run a marathon the weekend before so I figured worse case scenario I could probably at least escape faster than him.
At mile 7 he started walking the aid stations so I moved on. 4 miles later I started seeing the faster people heading back from the turn around at halfway so I entertained myself by cheering them on. Considering there was only one spectator between miles 1 and 25, this made me a lot of friends. It also kept me from running too fast until mile 18, when there was finally no one left to cheer on.
Sometime after that I got a little bored so I started running faster. I actually made it to mile 23 before I started wishing the race was over, which is a lot farther than I usually make it. At mile 25 the sheriff made me laugh at the turn into town and the rest was actually kind of fun.


I thought I might be emotional at the end, overcome with either joy at finally being able to run on my knee or overwhelmed with frustration at my slowness, but apparently traveling really has made me mellower because I just took a shower, got a massage and hit the road.


Life on the road is good!